The Bridge’s second series has so far kept us delightfully on our toes. With the numerous plot threads seeded last week finally colliding into one another this week we finally get a look at the bigger picture. 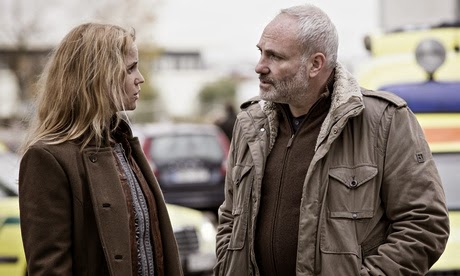 As episode three begins the stolen gas tanker from episode two sees an explosive (literally) end in the pre-credits sequence and we learn more about the terrorist group and its volatile hierarchy. If you thought that the gas truck stealing, violence prone quartet seemed somewhat underdeveloped last week you find out just why at the end of episode three. They’re gassed in a container, with a telling message left by their killer – presumably the mysterious Mother of Three seen on chat at various points throughout the episodes.

That leaves poor Linus an orphan, deprived of his well meaning but perhaps easily conquered brother Niklas. The way he finds out, via the television news he sees whilst the increasingly suspicious and /or vaguely intentioned Rasmus takes for soda and a sandwich is sad but perhaps better than learning from the slightly less acerbic Saga.

Indeed, Saga’s treatment of Rasmus is perhaps a catalyst for his rather unprofessional demeanour and peeved sideways looks seen throughout. But perhaps he means well – all will become clear over the next few weeks as we see what becomes of his secretive (and embarrassing, it seems) visit to one of the ex-terrorist quartet’s apartment on his own to receive a pepper spraying in return.

Elsewhere we see development in the Laura storyline as she inadvertently gets her teacher/lover Beates suspended from work following a phone call from her father to the Head. Perhaps this will have greater significance later on? Soon she’s joined (soon to be disappeared) Terrorist middle man Julian’s IT company as receptionist and ends up shot but alive after helping him film his meeting with Mother of Three. (Possibly not as the name describes judging by the fleeting glimpses of the shadowy figure…) But as luck would have it – the camera is smashed but the SD card survives!

We also get the seemingly unconnected strand involving sisters Caroline, married to the not favourably portrayed Alexander, and Bodin, who just loves sex. In fact, coupled with her gifting of a male escort’s number for her birthday and the exchange in restaurant (whilst eating squid, I might add) about having’s and doing’s and the somewhat thorny gift of a breast op from Alexander to Caroline, she does make for an intriguingly ugly character thus far.

Talking of sex, a rather hilarious conversation between Saga and Martin about who he is and isn’t having sex with is beautifully handled. Viewers will have noticed surely Martin giving Pernille a ride home more than once with a great big Danish smile on his face and Saga has too. (“Are you having sex with Pernille?” she asks in her usual blunt manner.) Martin it seems isn’t in the mood as he pushes Pernille away after a fleeting kiss.

The reason? He’s continuing his (to this reviewer, out of character) visits to his son’s killer Jens. Let’s see how this develops – it seems unconnected so far to anything else but The Bridge’s writers have ways of hiding clues in the open. By the time we reach the finale and the inevitable questions for the series leads at their London appearance in February this could become interesting…

What conclusion cab we make then? Perhaps it’s best not to at this point. There’s the usual quietly engrossing tone throughout as well as those arresting aerial night time shots that make Denmark and Sweden seem a world away. If anything, the scenery is something #srcz has enjoyed thus far. This level of artistry is important in a show as dark as The Bridge and the darkness does make it even more addictive.

Saga as well gets some development. Series one she was just rather weird, often darkly funny so in some ways. But this series she has an extra dimension in the form of her emotional challenges. Definitely a step in the right direction – but hopefully she doesn’t become too likable as that would be too out of sync with her known character we think…

We’ll be back next week with more discussion of The Bridge. Tak to all for reading!