If you’ve been following closely from the very beginning of the series a lot of answers are either given or hinted at with pointy lecturer sticks in this week’s penultimate double bill. As ever, it’s always a pleasure to watch The Bridge. 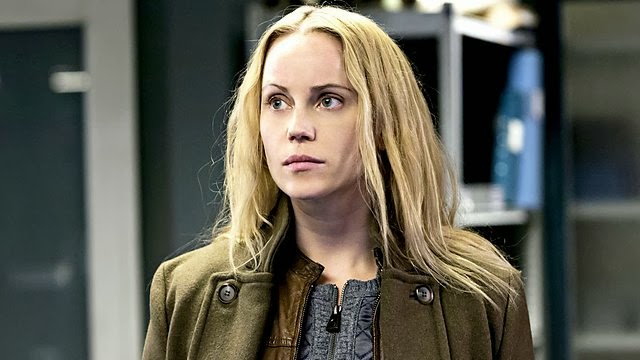 Following the cliff hanger of last week’s episodes, we find out that the less than slightly disgruntled (or just opportunistic) sailor who sank the boat containing seven corpses is after money. 100,000 kroner in fact from its owner, who claims no knowledge of the seven corpses it contained. Perhaps it’s all a ruse, perhaps it’s a red herring to keep us from the truth – but it does begin the seventh part in an entertaining manner.

Said sailor, Ramon Balski is soon found dead a barrel of potassium hydroxide. Can you see the pattern? Barrels of chemical substance, guns, sex, CCTV and murder are all dominant themes of recent episodes, with CCTV in particular adding a few scenes of interest here. I’ve said previously that Viktoria’s plotline seems distant from the narrative at hand but this week it comes firmly into play as we finally discover she is CEO and majority stake holder of Medisonus, the company where the substances so far used in attacks has been sourced from, possibly…

With that knowledge in hand, and the rather creepy discovery that her brother Oliver has rigged up her house with CCTV and one point masturbates as she undresses, unaware she is being watched from across the  street by her brother. Oliver certainly isn’t looking to get into anyone’s good books it seems, and after eves dropping on Viktoria’s conversations with Bodil and catching the two of them having sex calls off the planned book in a fit of jealous (?) rage. Coincidently, that bucket list of hers isn’t getting any more interesting, sleeping with a woman being ticked off with aplomb tonight.

Bodil, meanwhile is disowned by her sister Caroline when she discovers one of her husband’s phones and restores the texts that reveal their affair. All is certainly not well in love and war here! But did you expect sunshine in The Bridge? No. Relationship wise, Saga is still over thinking things suggesting to her very patient boyfriend Jakob that she gets a room of her own where she alone can enter to get space. (Something akin to a Mind Palace perhaps?!) Quite correctly, his response to this early morning declaration from Saga is incredulous. One prediction is that this is not going to end well, Jakob may well love her but is Saga really the kind of person who would let herself get caught up in relationships for too long?

Her conversation with Jakob’s mother went predictably ( and bitter-sweet funnily) badly and it would be a shame if the writers did the predictable thing with this storyline. Martin’s discovery that Saga’s mother had the previously mentioned Munchausen by proxy certainly adds fuel to Saga’s claim that her parents were “no good for her” and when Martin later questions her about her past she is very cagey. Perhaps not without reason?

Rasmus, the slightly annoying one, gets reassigned after his doctoring of evidence documents a few episodes back and he’s not happy. But that’s what you get for changing evidence isn’t it? His loss doesn’t phase Saga, but the rest of the team are visibly shaken by the loss of a team member – to her confusion, of course. It’s seems that Saga’s personality can’t be pushed much further in it’s out spoken and emotionally unfeeling – what will she decide to do about the realisation that is dawning on her face rather obviously next week? I can’t wait to find out!

Martin is back where the décor is more aesthetically pleasing now he’s moved back in with Mette, and Nikolaj is back home. The surface feeling looks good – but what did those shots of Mette going to the smoking room and staring outside mean?

But the case development is also first rate, with the mysterious Lennart Blomgren discovered to be living in Thailand and not as dead as his wife would have everyone believe. Meanwhile, after so much happening to her, poor Laura wakes from her unconsciousness and gives the sketch artist a very good likeness of Oliver…

Thus far this series has been just as excellent as its predecessor and in many ways much more plausible. With the golden touch of developing the leads’ characters expertly, series writer Hans Rosenfeldt is creating another classic in Nordic Noir television. Next week is the big finale and with the big question of just who Mother Of Three is and why the nasty looking experiments we see fleetingly are going on it looks set to be a gripping moment of true event television…