Imagine you’re on a date with The Devil himself, want would you do? Would you go to the best restaurant in the neighbourhood and bask in its low lit glory and discuss your sexual fantasies? It’s one of those questions that is hard to find an answer to and on No Bra’s second album Candy, coming to vinyl soon courtesy of NYC’s Address label, it’s answered quite effectively in the form of a song. 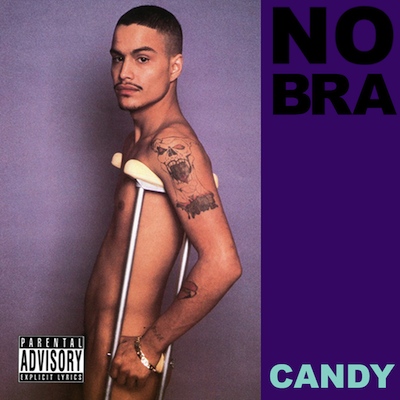 Indeed, if you’re in any way sexually adventurous this brilliantly straight to the point but very clever album will no doubt strike a chord. Perhaps it might seem odd to equate sex with music preferences but in this case it’s a good route as most of the album concerns that very subject.

But don’t think this is a smut smeared sex tape in vinyl form – far from it! No Bra produces music that is compellingly intelligent and never less than eye opening. When describing this music to an acquaintance we suggested it was the type you may hear at a very intellectual underground sex club. And, it’s not far from the truth in many ways.

Susanne Oberbeck’s No Bra is a sharp witted, compelling performer with the fantasies described in the songs often darkly funny yet suggested in the most distant and observational manner possible.  But the dark side is very evident in the way a human quality is imbued into the No Wave cool of the whole album. There is poetry here and some it is straight from the gutter in the most beautiful way possible on an album like this.

Opener Minger poses the question of just how easy it would be take someone’s life away, Over a musical back drop so simple it’s disturbingly effective she asks ‘How would you feel if I took your Minger away from you/ It would be so easy…” before adding “you would have to sleep in a bed of rubbish next to a church” in the most straight faced tone.  In a similar vein, the industrial jazz toned Construction Worker questions the possibility of coming onto a construction worker and getting arrested for it. It asserts the sexual fantasy lead narrative supremely, the declaration ‘I fuck biology, why can’t I fuck you in the loo’ never said in such a thoughtful tone.

Date with the Devil is a sardonic three minute highlight that mixes philosophy with sexual fantasy in the most listenable manner since Prince.  But beneath the clever imagery and wordplay is a morality that compels – the Devil confesses he became the Devil when he became tired of society, deciding to use people in the process. But lyrics aside though, the music on Candy is minimalist in its No Wave imbued production, played in a pleasingly dispassionate manner but never less than essential listening.

As an album Candy is well worth your time – and if you’re in need of an alternative sex education then this may well be it. Oberbeck’s performance is unique and if No Bra does come to town, then make sure to catch a live gig that is truly different! In the meantime listen to a record that will have addicted and you won’t really be sure why…

Reviewed by Sebastian Gahan. Candy is released 24/02/14 on Address in vinyl format.