Someone once said that robots rule and they were probably right… in musical terms. One of the pioneering bands to produce electronic music is Kraftwerk, as well known for their excellent run of album as for their recent lack of them. But when you have back catalogue as fascinating as theirs, there is much to enjoy in a look back. 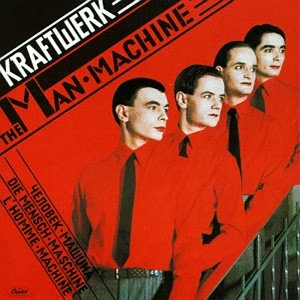 The Man-Machine is possibly their best concept album – with its iconic artwork impossible not to stare at for hours on end for its sheer style and ultra effective simplicity. It’s difficult to say just how it must have looked to buyers back in 1978, but it must have been mind blowing to say the least.

The album as a whole is still a proposition not to be messed with, six tracks of totally unique electronic songs with a heart of sheer invention that can’t be matched by many other such albums! Perhaps they weren’t the first group to experiment with electronic music buy they were the first to do it in a manner so utterly eye and ear catching that they became known as the masters of said genre.

Opener The Robots, with its hypnotic metallic edged refrain of ‘we are the robots’ and that still chilling syncopated beat that kicks off the song’s groove, is a classic to this day. As a track it’s a supreme example of electronic music with a deadly heart but as an opener it’s a standard setting six minutes of drama. As the album continues its metallic pace down the halls of innovation we get the still haunting Spacelab and the urgent synthetic tones  of Metropolis, as dramatic a musical rendering of the cityscape of the future as you’ll get.

But it’s not all serious, because there is that most famous of Kraftwerk moments on the beginning of Side 2, The Model. With just over three minutes to set its agenda, the opening stanza ‘She’s a model and she’s looking good’ does it all. Following three tracks of cold futuristic soundscapes and robot call outs its appearance is jarring to say the least. Really, this shouldn’t work at all but Kraftwerk, despite their appearances, are known for having a sense of humour occasionally. (See Sex Object, nearly a decade later for another example.)

Neon Lights brings the warmth up a notch, the softer synth and melodies of this nigh on ten minute track offering a repetitive but beautiful companion to the darker first half of the album. There would, arguably, be rarely a more touching Kraftwerk composition than this again and as such it’s shimmering melodies are surely a highlight on a consistently inspiring release.

That only leaves the closer, title track The Man-Machine. An alliterative ode to a future where mankind become the machines by our own volition, it’s a thoughtful but never ponderous close to what by modern standards is a very brief album. Of course, it has no need of an extension as it’s already an iconic and influential album in its own right.

Even with the music it would be an essential listen, but as with all of Kraftwerk’s albums the cover art is well worth mentioning. Shot by Günther Fröhling and typographed by Karl Klefisch, the two-tone, white and red cover art is simply stunning, seemingly setting the band as the robots and men-machines in one image that is simultaneously disturbing yet warmingly artistic.
If you’ve never heard The Man-Machine before, treasure your first listen. It will be the first of many…