If you’ve ever been to Arena, you’ll know one thing for sure. It’s an oasis of creative talents in an already brimming with multi-arts creativity city. There is much to recommend it for the artist and creative tourist alike and when they housed the much appreciated Threshold Sessions with Addistock produced for the Official Blog and #srcz we were very happy indeed. For this year’s festival Arena will have some special treats in store for all who care to join (and why wouldn’t you?). We asked Pamela Sullivan of Arena all about Arena and it’s artistic relationship with Threshold. 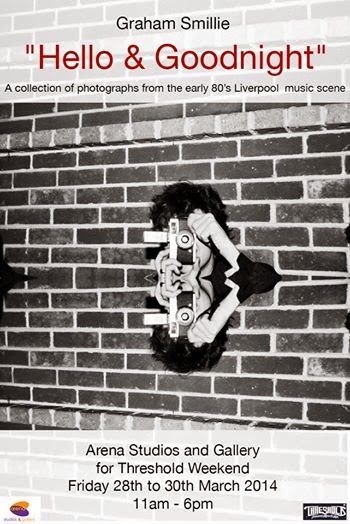 What is Arena Gallery?

Arena Gallery is a studio group with 24 artists including painters, ceramic artists, fashion designers… We’ve got a really good mix. (There’s) people who run their business from there right down to people who just come in on a Sunday. We have a really eclectic mix (and) we’re actively involved in the Liverpool art scene that has supported us. Threshold has supported us and we’ve supported them. We’re thirty one years old as a studio group. We’ve been in the Baltic area now for six years. We’re very happy in the studios here – it’s a vibrant area with lots of creatives around, lots of disciplines – games designers, digital, musicians etc It’s really nice to mix to different parts of the arts. Our gallery is small. Compact and bijou you may say...

How did Arena begin?

A little band of artists got together thirty something years ago – we’re not quite sure how old we are! There’s some question between us if we’re thirty this year or next year! (We tend to get mixed up because we have an auction every year – and we’re never sure if it’s the fifteenth or the sixth!) So it all started when a small band of artists came together in the 1980s on (our old studios) at Duke Street.

What will Arena’s role at Threshold be this year?

Arena has a role where we kind of push artists to get out there and show their work and carry on that ethos now. We pride ourselves on our emerging artists, really. From that, we have exhibitions and we get involved in things like Threshold. This year’s exhibition at Threshold will be Graham Smillie’s ‘Hello and Goodnight’, which mixes music with art showing a collection of photograph’s from the 80’s Liverpool music scene. We’ll also have Addistock filming some more Threshold Sessions again!