A criticism often levelled at Jonathan Creek is how divorced from reality it is. But that misses the whole point. In most people’s version of reality, magic and windmills don’t figure too heavily and (although they have been absent in this set of episodes) they were all there from the beginning. In fact, if anything the small village resident, advertising company working, married Jonathan Creek is a whole lot more connected to a (perhaps, particularly Southern) reality than ever before. 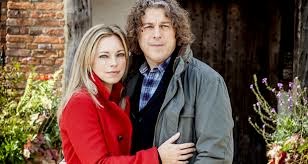 But don’t let such minor issues get in the way of watching what is meant to be comfortably escapist viewing even at its darkest. After the disappointing first episode, these last two episodes have been pleasant, if hardly groundbreaking, and for this final part of the trilogy it’s a reliably witty and, as ever, somewhat less that realistic adventure involving mistaken gigolos, kidnappings and a genie’s lamp.

Compare this to the on and off quality of previous episodes and two in a row is a definite win. With many detective shows the plot is often the crux of episode, but with this series the tendency has been to weave numerous threads together and see what happens. On this occasion it works very well indeed, with a main peril to be resolved and some darkly humorous fringe activity that soon is revealed as far more than that.

In her fourth appearance, Sarah Alexander is now better in her role than previously, adding immensely to the overall quality of this episode. It’s nice to see women once again stopping Jonathan in public places to say hi and it really adds subtext to what has been a very subtle interplay between the two leads so far when jealousy seems to come into play. One disappointment is that June Whitfield wasn’t used more often (she is playing twins though, so perhaps it could be a case of double the norm - but simultaneously?) than she was, but it was indeed good to see her in the show.

In terms of plot resolution this was quite a good episode, with the kidnappee rescued and all the clues tied together in that improbable Creek manner in time for pizza. Of course, in reviewing these episodes it’s been a priority to not reveal too much of what happens but still keeping the flow, so to speak. Considering just how many mysteries have been solved, writer David Renwick has done well to create at least two of three good quality episodes. But, arguably, Jonathan Creek has never been about heavy plot but about the journey to the solution. With a new location, new co-lead who looks to be somewhat more permanent that previous companions, the only thing that needs ironing out is just how to keep it interesting minus the obviously different spark that exists with on screen wife Polly…

As an episode, excellent! As a series, too short to build to any real crescendo, with no build up due to the shorter run. This series will though, arguably, watch so much better a few years down the line. Despite all that though, a sixth series is very welcome… with more episodes!