Salamander is edging, in no overly relaxed way, towards its conclusion. What did we learn in this gripping double bill? 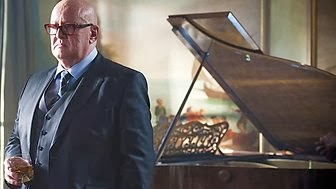 So far we’ve had car chases, explosions, conspiracy, government intrigue, assassinations, vague alliances and everything in between. For those of you who remember Millennium, (Chris Carter’s excellent late 90’s drama starring Lance Henriksen) there are some parallels here that are very much appreciated by this writer. Whoever would have guessed Belgium would be so enveloped in the web of conspiracy it is in Salamander’s fictional world?

There’s no denying though that, although the plot twists are sometimes verging on the far too convenient to be true and it’s certainly nothing that hasn’t been done before, Salamander is a guaranteed roller coaster ride of traditional spy and conspiracy thrills.

We’re edging towards the conclusion here, and it’s still not entirely clear how it will resolve. Filip Peeters  is as ever quietly brilliant as Paul Geradi, showing us why the older male lead is often a good bet in dramatic terms. His grief is entirely believable and it seems many viewers are taking to him in other ways too. A definite thumbs up right?!

In terms of plot, this week’s episodes see the termination of one major character and the political aims of the Salamander group come closer to realisation. The great thing about Salamander is that there isn’t really much room for too much analysis, what has to be done is done, and usually quickly. A previously occupied office can be emptied in a matter of hours and an unwanted presence disposed of with the flick of a black gloved hand.

The key to enjoying Salamander is not to look for logic particularly, more to enjoy the ride like on any cop show. Arguably, if this were one of the excellent wave of Scandinavian dramas it might not be as well received as it has been but the fact it takes place comparatively close by in a culture we know comfortably enough about makes it all the more enticing.

The excellent camera work on the series, not overly flashy but always showing us what we need to see while keeping things suitably dark and mysterious ensures that you never believe Salamander doesn’t control the country. No allegiance is certain or defined too much and every character has something to hide. Paul Geradi is the only man to trust, and until the Public Prosecutor is strangled and posed by Salamander’s Jonkhere instructed henchmen we’re still not too sure of which side he’s on.

The gang who robbed the 66 safes are still out there as well, undiscovered by Jonkhere and co. Next week this must come to a head. Surely? With Geradi invited to dinner with the daughter of potentially one of said group (nothing is clear as of yet, as ever on Salamander) and now gifted with the connection he needed in some mantle piece family photographs next week is sure to be a conclusion to remember…