Released earlier this year, Blood Red Shoes' self titled album really is worth your time. A disturbing, volcanic landscape decorates its cover and the music found within is not too different from that feeling. 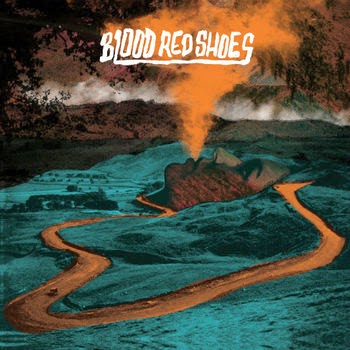 Welcome Home explodes into action on a bed of frenetic guitar riffs, ever increasing in their intensity before the positively killer drums kick in and add to the explosion of sound that shocks the unprepared listener just sixty seconds into the album. We’ve always known that Blood Red Shoes are not for the faint hearted – easy listening they are not, for sure.

This album strips away a layer of production and lets the raw guitar and vocals do the talking in the best way possible. The band’s urge for us not to slow them down on Everything All At Once is certainly one we’d we wise to heed – especially when they music as addictive as this.

Over twelve tracks the band beat up your ears with a most pleasurable intensity and highlights are a plenty. An Animal is one for sure, previewed as it was before the albums full release to great enjoyment at #srcz. Even the ‘quieter moments’ such as Far Away take the listener by the heart and on the taut but industrial tinged beauty of Behind a Wall we see the band at their best. It’s like listening to bees making the best honey in the country to a soundtrack of piercing riffs and not just the guitar kind.

Listen also to Speech Coma for a taste of the bands ability to make the darkest of music bittersweet with those unforgettable lyrics. ‘I can’t get my words out/ It’s like someone cut out my tongue’ they intone and it’s hard to describe why it’s such a great listen but the band’s trademark chaotic but good sense imbued arrangements are surely why it’s a listen that imprints on the mind with a rare ease.

Indeed, the only criticism that could be laid in the way of the album is that it’s perhaps a few tracks too long. But that’s but an afterthought when you think that it flows by with an ease uncommon in many albums of this genre. Loud isn’t always what you need but there are the quieter moments that break up the mainly heavy arrangements that threaten to overwhelm the listener on occasion.

As threats go though, this is one that is uniquely enjoyable. May their shadow loom for at least a few more spins!