At this year’s festival, it seems that all roads lead to District. Helen Basil guides us around her day’s activities on the second day of the festival… 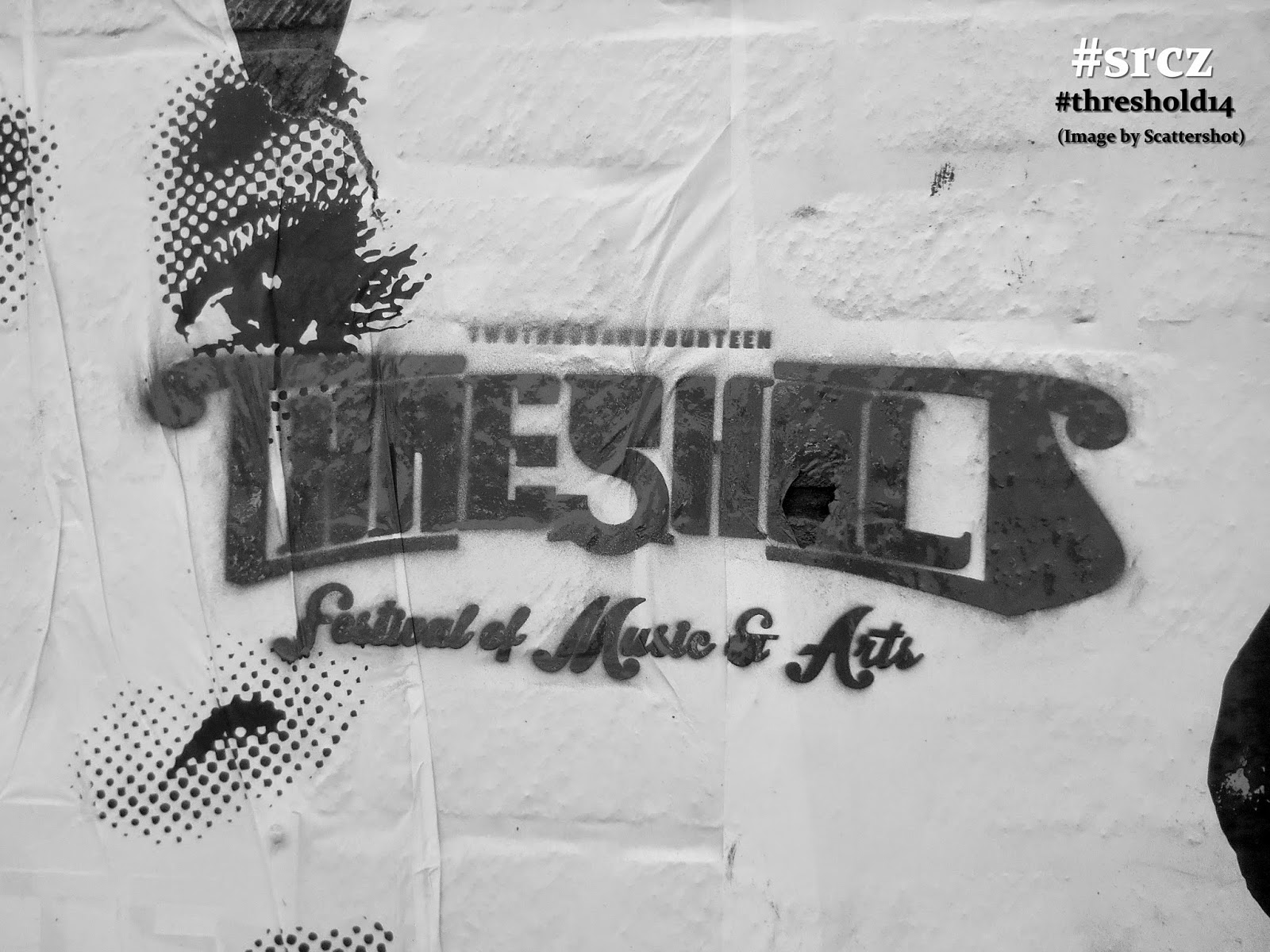 The second day started out for me with Christina Malley in District – at this point I was still reeling from the first day’s festivities and not fully awake yet. She was a perfect first act to draw me back into the feel of the festival.  Her voice is something else: crisp, clear and with enough power behind it for the occasional goosebump moment. And despite her impressive belting abilities, Christina is one of those rare artists who doesn’t over sing and molds her vocal prowess to fit the song rather than the other way around. Her piano was complemented by two backing singers and a guitar: a good combination for her bluesy timbre that was well received. Christina seems to be a very good example of a tried and tested performer: a well-rounded set from an artist who is completely in her element on stage.

The next band up was Redeye Jedi and, guilty as charged, they were another act that I drew my attention because of their name. Without the vaguest of ideas of what to expect, I was pleasantly surprised when they started playing. Their ska/punk/reggae sound, bundled up with an enormous amount of energy and stage presence, had the audience’s heads a-nodding and their feet a-tapping in no time. With no less than four brass pieces in their line-up, they create their own sound and deliver it with refined finesse.

A bit aimless, I wandered over to Siren since most venues seemed to be in-between sets as Pyro were just starting. And boy, did they make me feel like I’ve walked into the School of Rock film. Hailing from Wallasey, this rock’n’roll blasting quartet know their stuff: with a set made up of both their own songs and some covers thrown in for good measure, the talent they’ve gathered between the four of them is just a treat to behold. With an always-on-point drummer and massively talented lead guitarist, the package is complete with the addition of two singers who also happen to provide tasty riffs and basslines when they’re not busy taking control of the stage. And oh, did I mention that none of them is older than 15?

Nightfall was drawing closer and I made my way to the Lantern Theatre for The Lemon Collective’s evening of underwater shenanigans and musical delights. To the theme of dystopian futures and with the purpose of entertaining the audience as well as providing some hard truths, the creativity that this group of local artists displays is impressive. I managed to catch up with them and prod at the brains a few days after the festival… 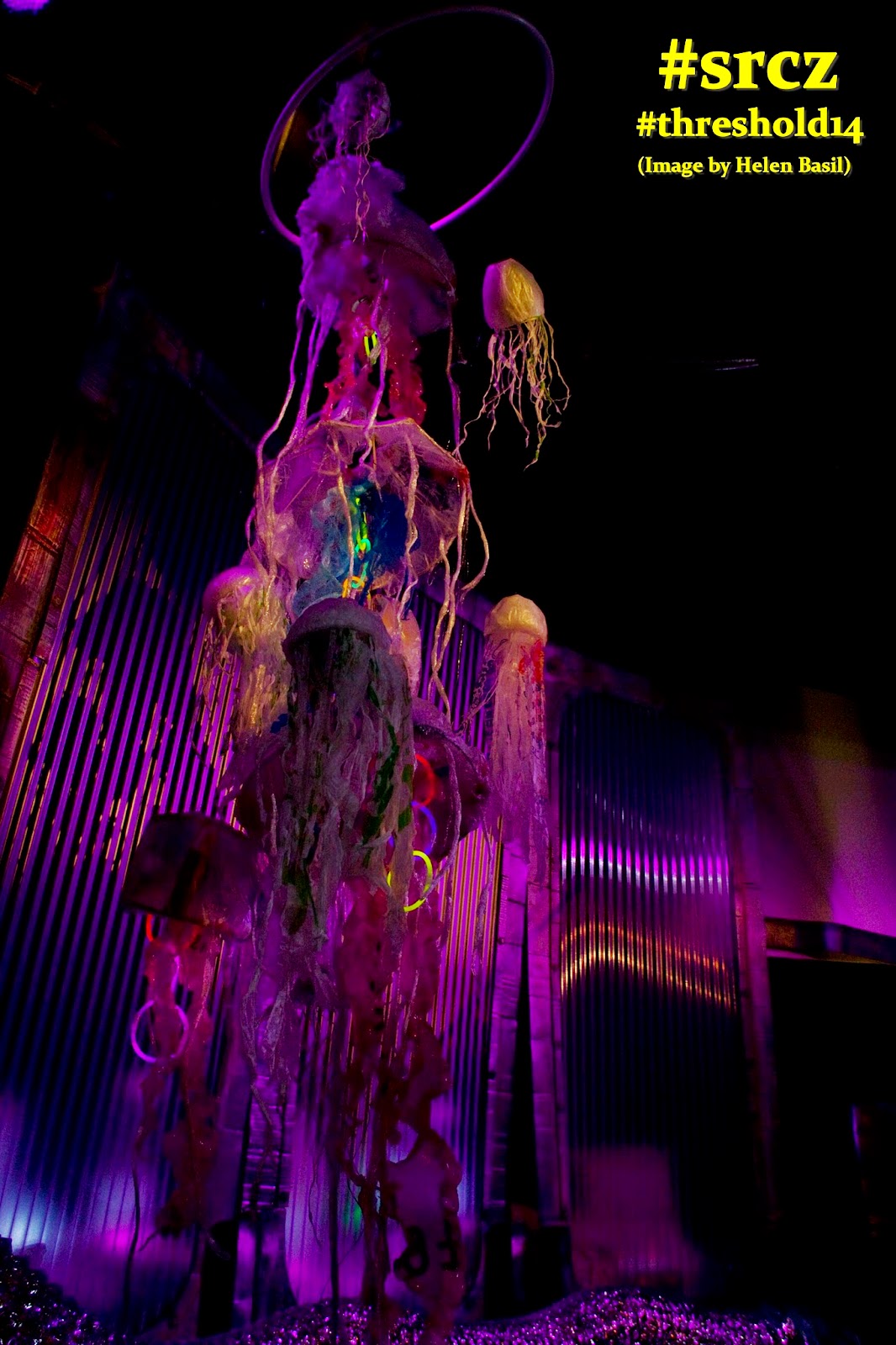 HB: So, I’ve personally had the pleasure of knowing about you guys for a while now but, for the uninitiated, sum yourselves up in a few words.

HB: Who is Lemon Head and how did he end up being your patron and sole benefactor?

HB: In a time when the future of the arts seems uncertain, how do you keep going? What drives you?

TLC: Mostly 35p energy drinks from the corner shop, 20p smart price noodles and the hope that someone will enjoy our shows or like our art work. ‘The arts’ is such an umbrella term it's hard to predict exactly what is going to happen in the future, what's going to be popular, what is going to die. We just concentrate on making work that we think is relevant, and making people laugh in the process.

HB: Tell me more about your Threshold 2014 project. What was the process behind the story you were telling? What kind of impact were you looking to make? And, probably something that everyone’s wondering… will we ever see the Lemon Submarine again?

TLC: We were given the theme of Retro-Futurism, and decided to go completely off topic and start making underwater stuff. This led us to imagine a 1960's Hollywood B-movie style future setting where plastic waste is taking over the oceans. Over the course of the next few weeks we got really carried away and started dreaming up a sexless clone workforce, irradiated eels with northern accents, giant LED jellyfish that fill the sky and, of course, The Lemon Submarine. If you haven't seen The Lemon Submarine yet, it will be out and about in the build up to future events.

If we were trying to make an impact, it would probably be to make people think about what they are throwing away, because one day there may be a team of unhappy clones trying to clean it up. I think this message might have become lost somewhere in all the craziness.

HB: And, finally: what has your experience of Threshold 2014 been?
TLC: We had loads of fun, watched loads of great music, loads of stress, loads of laughs, loads of plastic fumes going to our heads. The Threshold team have done an amazing job as always, and we would definitely recommend anyone looking for experience in this industry to volunteer for them. In 2013 they took us on, gave us a venue and let us host a stage in our first year of lemoning. We are massively grateful for the opportunities and experience Threshold have given us. It's a great festival that needs to carry on happening. 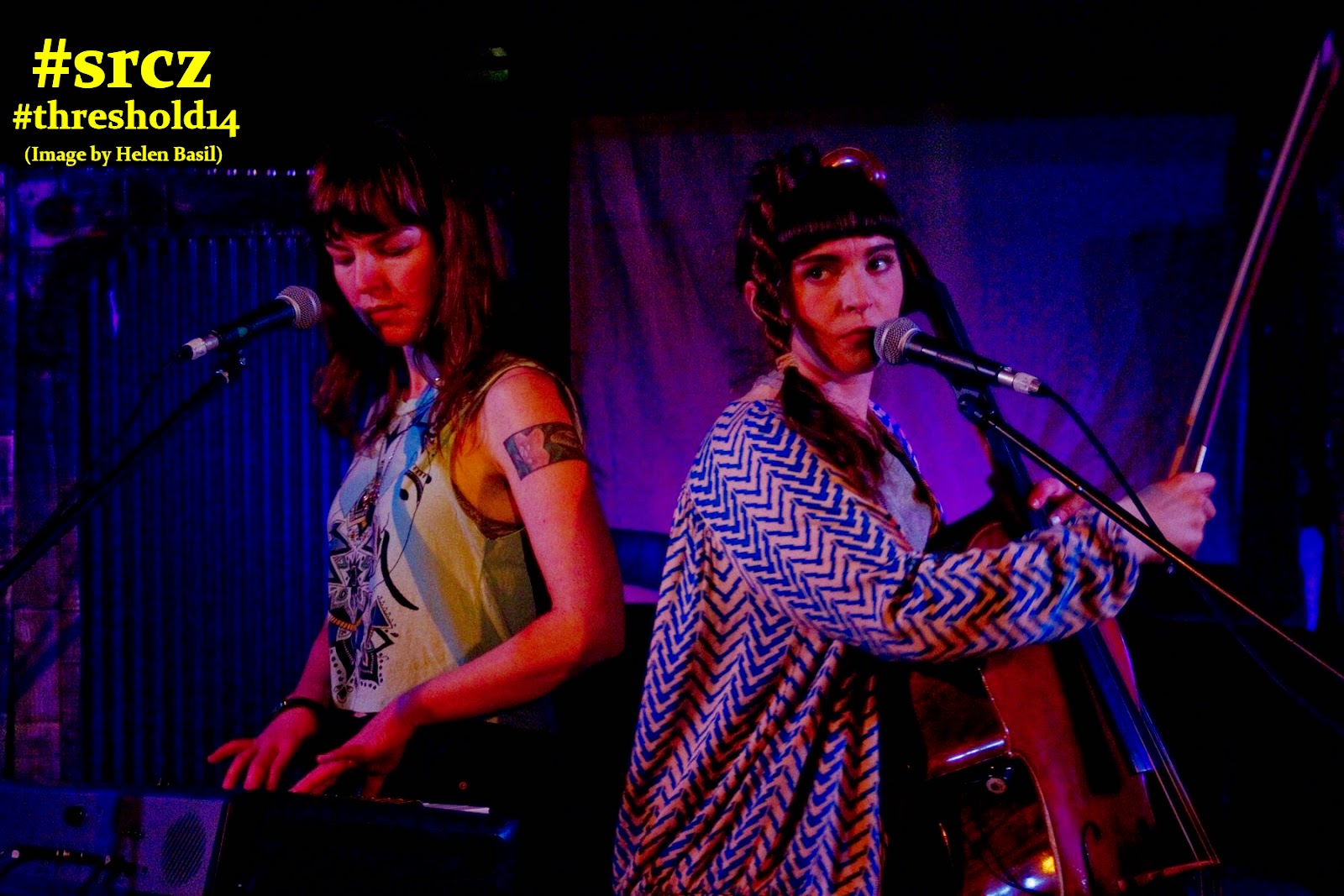 The first act on The Lemon Collective stage was Abi Wade, a Brighton-based singer-songwriter that I’ve been looking forward to see play in Liverpool for a while. Her unique style is built around her cello, layered with complex beats and a hefty amount of electronic sounds thrown in, a style that translates even better in a live setting. With her violinist joining on stage as well for the latter part, they weaved stories and kept the audience captive with a set that I doubt anyone wanted to end.

The next few hours were a blur to me as I returned to 24 Kitchen Street where The Harlequin Dynamite Marching Band were already underway putting on a hell of a show. An eclectic collective of local musicians, this act seems to be conceived with the sole reason of making people move. Putting their own spin on brass-infused, drum-heavy music, they redefined ‘music to dance to’ for me that evening. But just as everyone thought it was over, the party was taken outside with a retro-futuristic performance from spacemen and women alike – complete with a giant paper-mache alien, glowing hoola hoops and as much silver spandex as one could see.

It was my time to head off to District for Fire Beneath The Sea. At their beginnings, I’ve seen them play alongside We, the Undersigned and remembering jumping so much that merely walking was a chore the next day… I was glad I braved my tiredness to see them in full, 13 member line-up. Rocking their own style of funky, swingy hip-hop, they skillfully worked their crowd into a dance frenzy. Floor-destroyingly good, Fire Beneath The Sea put on an excellent performance and worked the crowd up for what was to come. 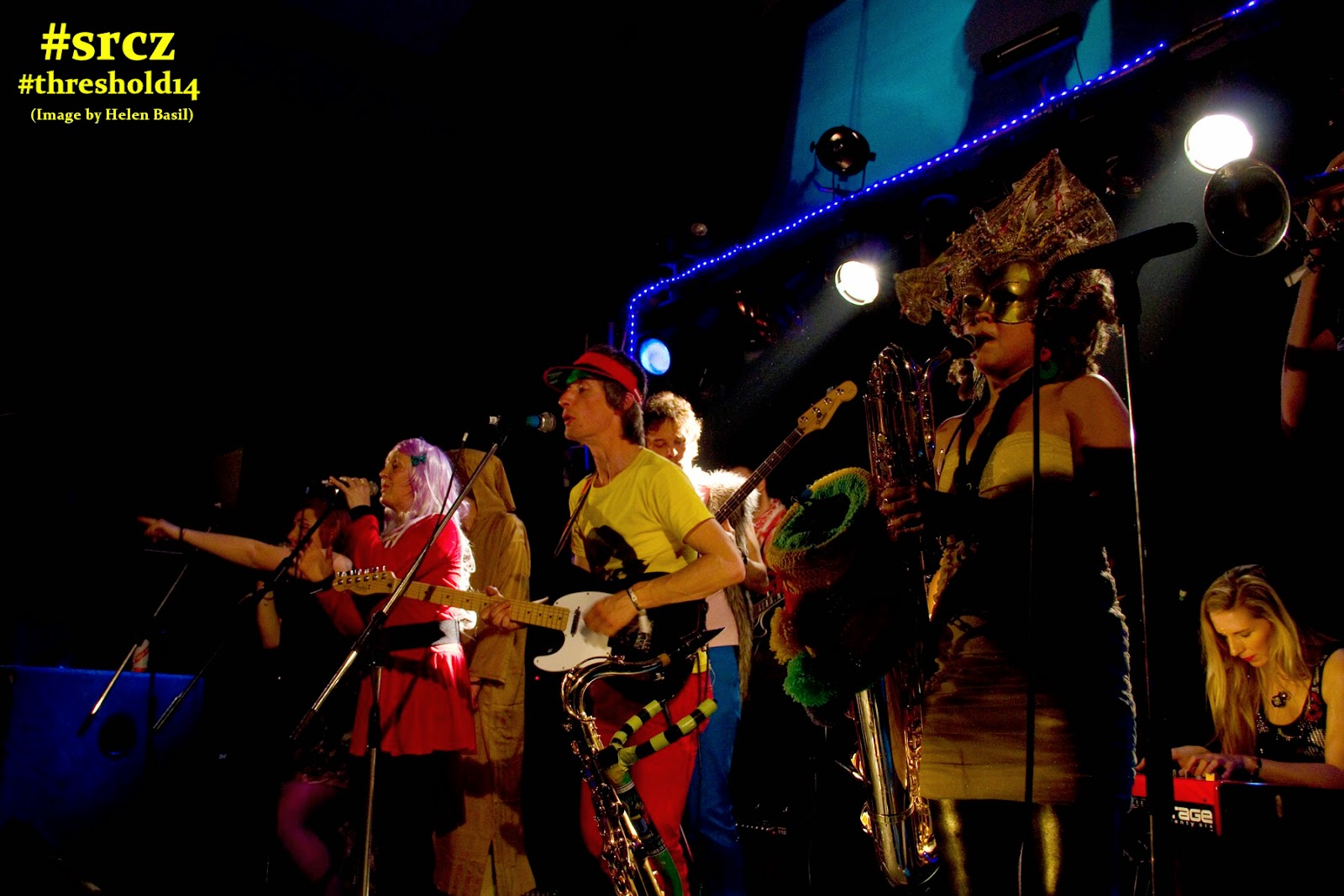 The evening was topped off for me with We, the Undersigned in the same venue. As the first local band I got into during my first year in university, I’ll always have a special place for them. Groovy brass, a funk-infused  rhythm section and spot-on vocals are just a few of the things I’ve learnt to expect from WtU, and they did not disappoint! Even with their currently diminished brass section, they’re still one with their music and put on a great show. The vocalists know just when to work the crowd, and I was delighted to hear some new songs from the Cosmic Warriors. An excellent ending to the second day for me, complete with discovering some great acts that I’ll be on the lookout for in the future!

Words and images by Helen Basil. Additional images by Scattershot.