If there any one phrase that could describe Grace Jones accurately it’s this: fucking cool! We’re not just saying it out of fear she might beat us up, it’s true. With a timeless and unique sense of style and the personality to pull off music that is truly modern even decades after its original release, it’s pleasing to see a deluxe reissue for her trademark album Nightclubbing. 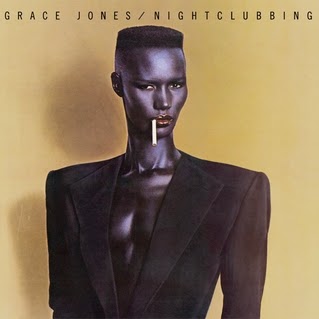 With the still impressive cover art of Jones, wearing a jacket, nothing underneath and an unlit but very menacing cigarette in her mouth we’re already looking at a classic album sleeve. That’s before you get to the music. Just as the cover art says ‘fuck you, I’m cool and I know it’ in the effortlessness of the pose, the music is just as impressive. Often picked out as her defining album, it certainly holds many defining moments.

Among them is the triumph of innuendo and rhythm that is ‘Pull Up To The Bumper’. With a signature rhythm motif from Sly and Robbie that has its origins in a jam from the sessions from previous album Warm Leatherette entitled Peanut Butter, (found in the deluxe reissue along with various remixes), and lyrics from Jones that are very suggestive it’s an instant classic.

Other highlights include the atmospheric, icy masterpiece Walking In The Rain (In fact, a cover) that infuses a Parisian catwalk arrogance in Jones’ nonchalant vocals with reggae rhythms giving it that uncanny warmth.  Little wonder it’s one of her signature songs three decades later. But whilst the songs are all noteworthy, be they cover or original, the real force at play here is Grace Jones herself.

Well known for her unique appearance and style by this point, she takes any song thrown at her and transforms it to her own admirably. (Although, throwing things at Grace Jones probably isn’t a great idea…) Five albums in, Jones has undoubtedly mastered the technique of moulding herself to the song perfectly. Doing covers is often considered an easy route, but with a tight band and production from Chris Blackwell and Alex Sadkin behind her, the scope is there to let her be the artist and project her personality into the songs so much more easily.

The album informed the creation of her iconic live show A One Man Show, an eye popping mix of theatrical performance, music and visual trickery. Perhaps the most effective is that of Demolition Man, with an army of Grace Jones’ storming onto the stage. Of course, the song is another Jones’ classic and was written by Sting for Jones before going on to covered by numerous artists including Sting himself.

Taken as a whole, Nightclubbing is still eminently listenable and has barely aged. The sheer power of the music to captivate the listener is still there, that impermeable icy cool the key to its timeless appeal. There is little else in the realm of popular music that comes close. Jones has since released many more albums of varying quality but still the Compass Point Sessions albums, of which this is the second, are the emphatic high.

It is hopeful that we will see Deluxe versions of the other albums in the series, Warm Leatherette and Living My Life, as the second disc of extended mixes, alternate masters and outtakes really is worth the price of admission. If you haven’t experience Nightclubbing yet, now’s your chance…