Some albums are put together with no thought, consideration or regard for the ears that will eventually become the fan. In the majority of cases it doesn't matter that much, as the average listener is song, rather than sequence, orientated. But for the select few who care, there is a natural methodology in sequencing an album that lifts it from brilliant to exceptional. It comes as somewhat of a surprise then to find an album sequenced chronologically that is more than merely exceptional. Essential is the word du jour for Grace Jones' 1985 album, Island Life… 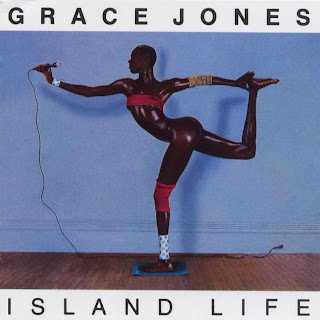 I'll tell you a story. One day I walked into a music store with one goal: To pick up some great music. Now recently I had come across Grace Jones by way of her comeback with Hurricane. Not satisfied with the already excellent dish, I wanted more. My wallet told me no, but my heart screamed out yes. So when I encountered the simply bizarre but somehow beautiful cover of Island Life it wasn't long before I was disobeying the pragmatism of my wallet and giving into my heart. In short, I had completed my mission.

And so it was that I sat down eagerly in my lounge and received possibly one of the finest experiences ever on disc. This music satisfied me on all levels; In aural, artistic and inspiration terms. From beginning to end Island Life is nothing short of artistic genius and excellence. Not a track is out of place. Even the covers, and there are a few, surpass the original versions immeasurably. Sure, it's a Greatest Hits album, but how often is the word great misused? Island Life is truly great, a masterwork even. (I don't say that often, by the way!)

The album gathers together ten tracks from between 1977 and 1985 and represents a kind of marker in Jones' career. After 1985 her sales diminished, but the quality was still there for anybody who chose to care. La Vie En Rose, Island Life's opening track is a cool, excellently done cover of Edith Piaf's original standard that, like this whole album, hasn't aged one little bit. It's actually hard to believe that it was recorded in 1977! Next up we have the high camp disco numbers "Do or Die" and "I Need A Man" which, although no match to the rest of the album are still a good representation of the disco queen era of Jones' career.

Fourth track Private Life begins the lucky seven of groundbreaking and challenging songs that make up the rest of the album. There's nothing more I can really say about them that isn't already said in the excellent liner notes by Glenn O'Brien. It's all here, Pull Up to the Bumper, Love is the Drug, Walking In The Rain and My Jamaican Guy. Last, though certainly not least is the statement extraordinaire of all closing songs, Slave to the Rhythm. It's hard not to sympathise with her sentiments.

But aren't you glad that "the rhythm" enslaved Grace Jones in the first place?