If you have a cleaner, or like to clean, (or even prefer the cluttered bohemian style living beloved of many) then you may have wondered to yourself if they were from Venus. We’re pretty sure you haven’t, but you will once you’ve immersed yourself in the beguiling world of London’s Cleaners From Venus. 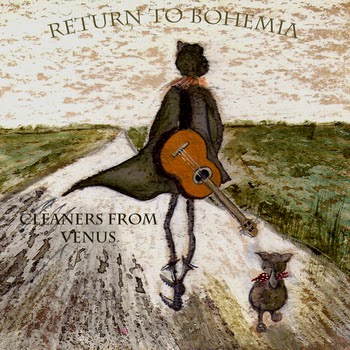 The new album Return To Bohemia is a slow building record that, if you close your eyes long enough, evokes images of canal boating through London with lots of guitars and a few gigs booked along the way. There are moments of introspection, moments where the guitar does it’s amped up thing and the occasional moment that reminds you of listening to sixties pop.

Put all together, there is a certain charm that shines through on Return To Bohemia. It harks back to a time when Sunday was a day for watching the sun shine over a field in bloom, hair blowing in the breeze and problems left behind a closed door. True, are still aspects of that to Sunday now but take a listen to track A European Girl and you’ll feel the vibes flow over you instantly.

Indeed, the album’s title gets more truthful as the record goes on. Bohemia, eluded to on track Welcome To B0hemia, is a perfect description of the world that is occupied here. The song takes a rather snarky side wipe at perceived notions of bohemian culture, and even though it’s hard not to say ‘hey, what’s wrong with it?!’ out loud to the speaker, there is a certain amount of truth in its wisdom.

Overall though, the Cleaners From Venues should be proud of Return To Bohemia as it’s one of those slow burner records that, on first listen, flows past perhaps a bit too easily but on revisiting it gives more to consider.  Certainly, that London sound is there and all the better for it!