Celluloid Ghosts
How I Am Haunted By A Stalker

I am being haunted by Cinema. Not film or movies (or even a film or a movie with a capital ‘F’ and ‘M’) but Cinema: true, worthwhile and in its purest form. I watched Andrei Tarkovsky’s Stalker a week ago and cannot get it out of my head. Asleep, I dream I am in ‘the Zone,’ where its naturalness and ordinary mysticism makes me feel both wanting and fulfilled. 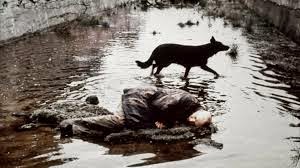 Awake, I wonder if I sleep enough will I eventually make it to ‘the Room’, and will I have the courage and conviction of my desires to enter and make my wish? Much has been written about the Russian 1979 Sci-Fi classic: it’s parallels to The Wizard of Oz, it’s metaphors and analogies to a Cold War Soviet Union (however, the reading I have done on Tarkovsky has led me to believe he was an apolitical director) and its continuing influence on Cinema. (For example the primary shot of Von Trier’s Nymphomaniac Part 1 is a homage/ copy of the first image of Solaris.)
The film is about three men on a journey with no real conclusion (that is to say they never reach their destination by choice/ they do reach it but decide on not ‘overstepping a line’ [that of the Room’s door]) but to quote Ralph Waldo Emerson, Jackson Pollock, and all the other thinkers the line has been attributed to, ‘the journey is the destination’, ‘the process is the product,’ etc. etc.
As I watched the movie I instinctively chose ‘the Writer’ as the film’s avatar for me, but in retrospect I believe I am ‘the Stalker’, left despairing that no-one else believes in the same magical possibilities of the ‘the Room’, to me an analogy to the human mind and all it is capable of, or sees the normal, everyday (almost mundane) beauty of ‘the Zone’: our surrounding connections and synchronicities with others.
So, through this thinking, I realised that I was not haunted by the Film, but by myself: the man dreaming about the man, the ghost haunting its own home, the stalker stalking oneself. I wonder what I will find…