Often regarded as the defining album of Marianne Faithfull’s five decade career, Broken English is one of her most distinctive releases and still an undisputed classic three decades after its release. 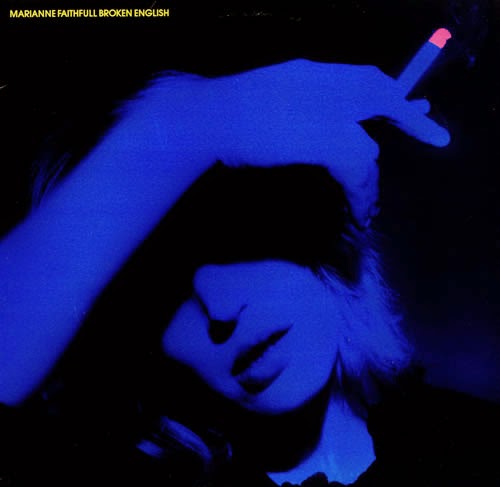 The very end of the seventies is not an overly ripe time for classic albums generally, but the melancholic tone of Broken English gives it a timeless quality that still impresses now. Arguably, Marianne Faithfull has always been an artist you either get or just don’t get, but there’s no reason why you shouldn’t get the music on Broken English simply because it speaks to the darker heart of the human psyche.

When it was remastered for its 2013 reissue for Record Store Day it was easy to tell why the album has endured so well. With a mature, hope half hidden melancholia it latches onto your emotions, putting time aside and conjuring up merely the moment you felt so inclined as to listen to the record. Perhaps the most striking aspect of the album is its stark sound, never missing a beat but rarely going at a pace faster than is necessary.

Coupled with Faithfull’s trademark ascerbic, gin soaked lyrics and strangely alluring voice that is seemingly the epitome of rough hewn beauty. Listen to album track Guilt and try not to be impressed, as the lightly reggae imbued backing matches so perfectly with the poetic and ear-grabbing lyrics. Then listen to one of Faithfull’s most iconic songs The Eyes of Lucy Jordan and try to work out just why it feels so special. Subtly tragic, poor Lucy laments how ‘she’ll never ride through Paris in a sports car with the warm wind in her hair’ at the age of 37 and it’s a line so evocative it hits you right where it hurts.

But look to the eighth and final track on the album and the music is amped right up for the equally iconic Why D’Ya Do It, a seven minute venomous spew of lyrics against a cheating other half as poetic as it’s honest. “Why d’ya let her suck your cock?” the song says in one of the most famous lines and you can tell it’s serious. As an album closer it’s hard to fault, witty yet cause, poetic yet supremely venomous and above all a supreme paean to the virtues of not cheating on your lover.

Broken English as a whole is one of the best albums from Marianne Faithfull, well worth a listen even if you don’t intend listen to any other record from her catalogue of twenty albums. Comparisons with her later album After The Poison are very valid and if you like music that is honest, emotionally brutal and very, very good then you could do a lot worse checking out this very unique album from one of music’s most poetic singers.