Rumblings on the grapevine suggest that a new U2 album is likely to appear before the end of the year, in fact according to Rolling Stone magazine it could even be released this month. Love ‘em or hate ‘em, it’s a significant moment as U2 have now been spent several decades amongst the very biggest bands.

I remember when I first got into U2 as a kid in the early 80’s. I liked the imaginative guitar style, the tribal-influenced drumming and the fact that the singer bellowed those impassioned choruses like his life depended on it.
They weren’t megastars at this stage, just one of many great post-punk bands around at the time. Something that marked them out was their Irish background; along with other Celtic bands like Big Country and Simple Minds, their music had that bracing, romantic (in a misty-eyed sense) flavour – a sensibility, incidentally, that is incompatible with cool.
I bought their album War, which had an extraordinary cover. It featured a black and white photo of a boy about my age, staring into the camera with a serious expression (the same kid had also appeared on the cover of their debut album, Boy). I identified with him, whoever he was. I was young and indignant and I felt like standing up for something, or at least for myself.
The album seemed to come from a place of conviction – “Sunday Bloody Sunday” was about the troubles still kicking off in northern Ireland; Larry Mullen Jnr’s drums were mixed loud, evoking the rhythms of the marching season. The rest of the album was an object lesson in small-band dynamics, The Edge’s chiming guitar lines interlocking brilliantly with Clayton and Mullen’s driving rhythm section. 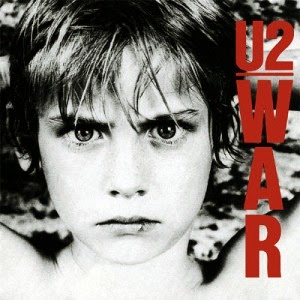 I remember Live Aid so well. I sat and watched the whole show in our kitchen from twelve noon until, well…it must have been about midnight when I finally sloped off to bed. One of the highlights of the event for me was U2’s performance when they extended the song ‘Bad’ to about nine minutes, Bono disappearing to the front of the stage, plucking a girl out of the front row and dancing with her. It was an outrageously confident performance from a band who most of the world didn’t even know about at that stage.
We all know what happened after that. In a short time U2 became globally massive, with the epic, mainstream album The Joshua Tree. It was satisfying to see them make it big but I was aware that amongst my friends, no-one seemed to like U2; in fact most of them seemed to hate them.
I couldn’t work it out. For us, originality was the key trait we valued in music. U2 were clearly one of the most original bands around, having invented their own sonic landscape, but something about them was turning off the ‘the cool people’. On the rare occasions I could get anyone to mull over the issue in their minds their complaint was usually with “that dickhead singer”.
Google “I hate Bono” and 2.5 million seperate pages appear. No other rock star has attracted so much bile. Can you imagine any other rock star inspiring a film with a title like “Killing Bono”?
If you examine some of the reasons on internet discussions, you will find people saying “He’s so egotistical” or “He wears sunglasses all the time” or “He loves himself” All of these may be true but are they not also amongst the main criteria for being a rock star? Was Jim Morrison not vain? is Axl Rose not arrogant?
A more compelling criticism relates to his charity work. Ever since live aid, Bono has had a parallel career as a campaigner, working for debt relief, human rights and AIDS projects, setting up charities and foundations, meeting world leaders. His efforts have undoubtedly raised the profile of many issues but they have also raised the profile of Bono.
And this is where the animosity comes in. Bono’s fame and fortune is intrinsically linked to his charity work; there is no way to disentangle the two. To his detractors, the vanity of his persona is all-pervading. He can’t hold a press conference about human rights without sounding smarmy and pleased with himself, or play a benefit concert without basking in the glory of his saintly mission. It all appears to be for the greater glory of Bono.
Then there is the fact that he has often seemed a little too pally with the likes of George W Bush and Tony Blair. To his radical critics, it is always going to look like he is ‘cosying up’ to the powerful rather than influencing them for the good. He should be smashing the system not flattering it.
For other people who have little interest in global politics, all the campaigns just feel like lecturing. For them rock’n’roll isn’t about being responsible, it’s supposed to be the exact opposite. Authentic rock heroes give themselves up to their spontaneous, debauched, animalistic side; and as a result their fans get a vicarious release from the tedium of their workaday lives. Real rockers don’t give a shit. It’s not cool to give a shit.
As someone on a Drowned In Sound discussion board says:
“If Bono had never done any charity work and just set himself up to be an abrasive cunt, we’d probably all think he was a bit of a legend.”
I get that Bono is quite annoying – ok very annoying – but it doesn’t put me off. Like Prince or Sting, he’s one of the artists I regard as a bit of a tit, but I still have affection for. When interviewed in music magazines, his humility and intellect are undeniable; and there are often self-mocking lines in his excellent lyrics.
In his defence, he is one of the few celebrities attempting to use his fame and influence for something useful. And is his approach to campaigning so misguided? Perhaps you have to get inside the powerful cliques to have any hope of changing the system. After all, a kid with AIDS hasn’t got the luxury to wait for a world revolution.
As for his band, I can’t think of another who had such an impact on the sound of music of rock music in the last thirty years, apart from Nirvana. That impact was not all for the good in my opinion; the big, widescreen production techniques of Brian Eno on U2 albums laid the foundation for the blandly-streamlined wash of sound favoured by Coldplay and many others.
The ace in the pack for me is The Edge, who back in the 80’s came at the guitar from a completely original angle, with a range of chiming, percussive, atmospheric techniques that he continues to develop.
Despite that, he’s always been somewhat low on the pecking order in guitar hero terms. It probably has something to do with that worthless currency of cool. Despite his name, Edge has never had any ‘edginess’ around him – he’s never looked particularly iconic, or had any reputation with drink or drugs; he just gets on with being a boundlessly inventive musician who wears a crap little beanie.
As for the new record, I’m not particularly eager to hear it. The last thing I liked by U2 was the single ”Electrical Storm” from 2002 and I think their best work is probably behind them. I’ll keep on listening to their best stuff like this, the title track of what I think is their best album, The Unforgettable Fire.
(Tom George)
This a rticle also appears at Tom George Arts.