The Story: The Doctor and Clara discover an extra-terrestrial menace and a hero who can’t be real in Sherwood Forest. After all, Robin Hood is a fictional character. Isn’t he? 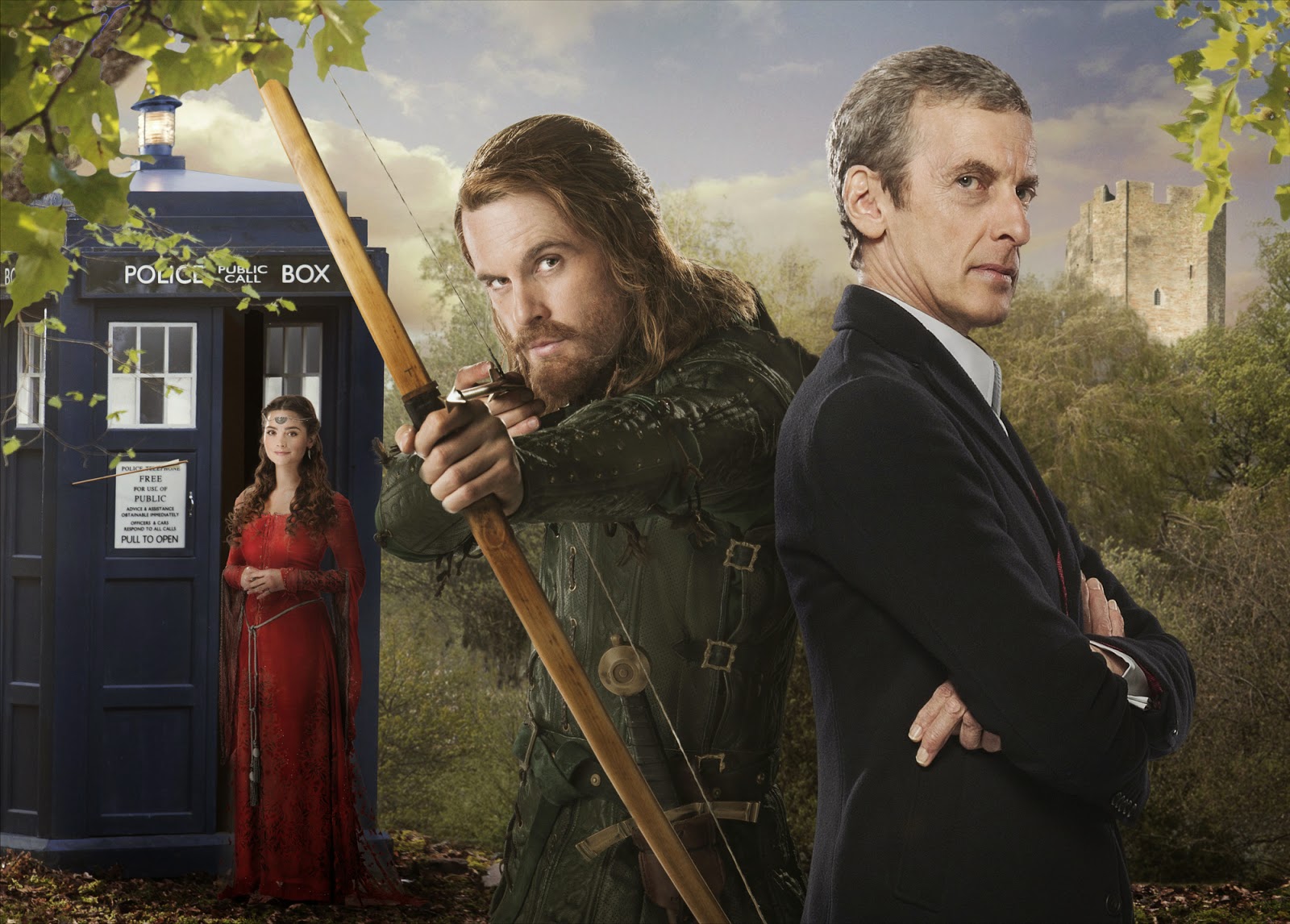 Writer Mark Gatiss is something like Marmite in the world of Doctor Who. You either love his stories or you don’t and Robot of Sherwood is sure to divide fandom as much as, say, Victory of the Daleks, which introduced us to a set of faintly ludicrous M&Ms style pepperpots.

Watched as a stand-alone episode, Robot of Sherwood is a fantastically camp and very rompy thigh-slapper of an adventure that gives more than a knowing wink to old Hollywood. Tom Riley as Robin Hood is all teeth and twinkle and his band of merry men tick every cliché box as they gambol around an extraordinarily sunny Sherwood Forest robbing the rich and giving to the poor.

As a Matt Smith vehicle, this episode would have had quite another feel, but put a man who the Doctor can’t believe is real against our new, very frowny Peter Capaldi Doctor Who and we’re looking at a very different beastie indeed. Capaldi’s always been a great comic actor and here we’re treated to some very well done (metaphorical) pecker jousting as the Doctor and Robin Hood work out how to escape and save the day while trapped in a dungeon with a wonderfully gruesome goaler.

Of course, you can’t have Robin Hood without the Sheriff of Nottingham and Ben Miller gives us the old rotter with a score of 7 of the Alan Rickman scale. And of course, you can’t have a Doctor Who without something un-Earthly going on and the dastardly, eponymous robot (robots?) of the title do this in style as they evaporate useless peasants while plotting their escape from the castle/dominion over the world.

One of the great joys of this new series has been Clara’s evolution as a companion and in Robot of Sherwood, she seems very much in charge, whether she’s choosing where in time and space to go or outwitting the evil Sheriff of Nottingham.

Robot of Sherwood will probably never make any serious Doctor Who fan’s Top 10 list, but there are so many enjoyable scenes in this episode that it’s worth watching again just to enjoy the showmanship of Paul Murphy’s direction and Gatiss’s mostly lovely, partly daft script. Talking of action scenes (we were, weren’t we?) Capaldi may be the oldest actor to play Doctor Who to date, but whether he’s taking on Robin Hood in a sword fight with a spoon or being clobbered round the head by a giant robot, there’s no sign that he’s doing anything but having a ball in the role.

Following all of the fun and action, there’s a rather lovely and particularly poignant exchange between the Doctor and Robin Hood as they ponder on what it means to be a hero. A legend. A story told in history. It’s enough to make you want to scream at the Doctor to take Robin with him, so we don’t have to leave him in his sun-dappled forest to become a tale told down the ages.

There were some small references to the “Promised Land”/Missy story arc that seems to be building in this series, but Robot of Sherwood is a good enough episode even for the most casual of viewers. In fact, I’d go as far as to say, they’d probably enjoy it a lot more than hardcore fandom. All-in-all, it’s a leave-your-brain-in-a-jar, sit-back-and-enjoy-the-fun romp.

Best dialogue #1:
Robin Hood “Robin Hood laughs in the face of all! HA HA HAAA!!”
The Doctor “And do people ever punch you in the face when you do that?”

Best dialogue #2:
Doctor: “Yes, I have a plan.”
Clara: “Can you explain your plan without using the words ‘sonic screwdriver’?”

Best dialogue #3:
Sheriff: “Shortly I shall be the most powerful man in all the realm. King in all but name. For Nottingham is not enough.”
Clara: “It isn’t?”
Sheriff: “After this….Derby!”

Questions of the Week: Where did Clara get all that hair from? And how was it so immaculate after a dip in a moat?

Music of the Week: Murray Gold’s camp, Errol Flynn score during Robin Hood’s fight scene with the Sheriff of Nottingham

Fan-pleasing moments: An arrow in the TARDIS, Richard the Lionheart, Patrick Troughton, a miniscope, the Doctor with a spoon, a self-healing TARDIS.