The Story: The Doctor goes...ahem...undercover at Coal Hill school in order to stop an Earth-threatening menace, the Skovox Blitzer, and he’s about to come face-to-face with Clara’s new boyfriend. 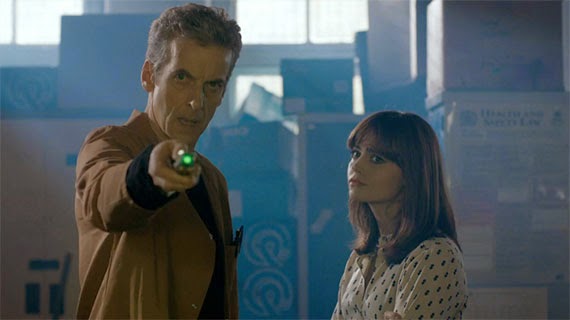 So we’re getting to the halfway point of Peter Capaldi’s first series playing Doctor Who already. Can you believe it? So far we’ve seen the Doctor and Clara zip around through time and space - their new relationship emerging rather engagingly - while Clara builds another new relationship; this time with fellow teacher, and former soldier, Danny Pink.

The Caretaker starts off showing Clara’s double life in all its exhausting madness. Trying to explain a tropical tan and chucking seaweed from her dress at the start of dates with Danny, living a lie is clearly taking its toll on the poor girl. Which makes the Doctor’s rejection of her so that he can go “deep cover” in order to save the world more than a little perplexing for Clara.

Turns out, “deep cover” is not as deep as the Doctor imagines as he turns up at Clara’s workplace as the new caretaker, John Smith, where he immediately tells everyone he’s known as the Doctor. Deep, deep cover indeed.

The script by Gareth Roberts and Steven Moffat successfully manages to have the Doctor, Clara and Danny Pink pleasingly dash around in pursuit of the Blitzer, while also giving enough breathing space to cover the very tricky subject of Clara’s two very different relationships with the two most important men in her life.

The Caretaker continues the theme we’ve seen running through this series of exciting stories with dark undercurrents. It also gives us great direction (here by Paul Murphy), with a considered pace and interesting angles, and some brilliantly funny dialogue. In a series that’s already been very, very interesting The Caretaker is possibly the most interesting yet.

While the Doctor appears to cack-handedly soften his approach to Clara, his obvious disdain for Danny Pink is almost difficult to watch. Although this series has made reference to the Doctor’s dislike of soldiers, we almost wonder if this is the same man who held Brigadier Lethbridge-Stewart in such high regard.

The monster-of the-week, the Blitzer, might make a fan-pleasing diecast toy at some point, but it seems little more than a MacGuffin here to bring our three main protagonists together. In two standout scenes we see the Danny Pink discover some of the truth about Clara and her time-travelling companion, and his concerns about what it means for his new girlfriend. We’re also hit with the news that Clara loves Danny. Although she says it matter-of-factly, you feel that it hits the Doctor really hard.

Samuel Anderson finally has a story to get stuck into as he does so with great aplomb as he calls the Doctor out for what he is - a man who makes people want to push themselves to please him. The scene where he salutes the Doctor in the TARDIS is almost agonising to watch and you really feel for Clara torn between her two lives with these two men. But Danny is more than up to the challenge of dealing with the Doctor and the other alien menace at the school as he very quickly becomes embroiled in the fight to save the Earth.

Danny is also sharp enough to see the danger that Clara faces and the lies she’s been telling, “You say you’ve seen wonders, but you kept them secret from me.” It’ll be interesting to see how this three-fold relationship plays out.

Far less good in the lying department is the Doctor as his “deep cover” role becomes a total sham in the face of problem pupil Courtney Woods (a brilliantly precocious turn by Ellis George) to whom he reveals everything without raising a single eyebrow. Courtney’s “Yeah, so what?” attitude must appeal to this new, spiky Doctor and he whips her off in the TARDIS to see off the Blitzer, even if the trip does make her throw up. Let’s hope it’s not her last trip, as she plays so well the kind of unimpressed eye-rolling that only a teenage girl can manage.

The episode ends with another visit to Missy’s Promised Land/afterlife/nethersphere, where a recently deceased copper comes face-to-face with new boy, Seb (Capaldi’s fellow The Thick Of It alumni Chris Addison). What this place really is and why people end up there is as much of a mystery as the mad-eyed Missy and the new and creepily welcoming Seb.

We may still be waiting for an outstanding Capaldi episode, but The Caretaker is, like much of what’s preceded it; very well written with a dark underbelly and highly entertaining. Which is a pretty decent place for a halfway point.

Did you know? #1: Jimmy Vee, who plays the Skovox Blitzer, has also played some other memorable characters in Doctor Who, including the Moxx of Balhoon in The End of the World, the Space Pig in Aliens of London/Word War III, and the brilliant Bannakaffalatta in the 2007 Christmas Special, Voyage of the Damned.

Did you know? #2: The Doctor has used the John Smith alias many times before, including twice while working in schools. Once in School Reunion and again in the brilliant two-parter Human Nature/The Family of Blood.

The “It is I,  LeClerc!” Award for Most Brilliant Disguise: The Doctor in a caretaker’s overall, “So you recognised me then?”

The “Stop Before I Get A Big Head” Award for Best Compliment: “You look lovely today. Have you had a wash?”

The “Proof that the Doctor doesn’t like Danny” dialogue best bits:
“The world is full of PE teachers”
“Dave”

Danny has the Doctor sussed: “He’s your dad. Your space dad.”

The Doctor Who approach to dealing with teenage girls: “Haven’t you got shoplifting to go to?”

Fan-pleasing bits: Two River Song references, Clara can open the TARDIS door with a click of her fingers.