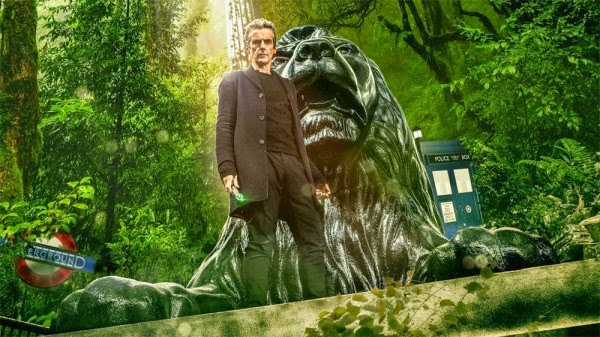 The Story: The Earth has been invaded in the strangest way. Waking up one morning to find the planet covered in forest, the Doctor (Peter Capaldi) must work out why this has happened and how to save the future of humanity.

After last week’s sublime episode Flatline and with acclaimed writer Frank Cottrell Boyce in the driving seat for In The Forest Of The Night, we sat down expecting big things. What we got instead was arguably the weakest episode in a strong series of Doctor Who.

The concept of being lost in a forest is not new in world of Doctor Who and the teasers for In The Forest Of The Night had a magical, fairytale feel that failed to materialise fully in the 45 minutes of the episode itself. The sight of London landmarks amid a world-spanning forest is beautifully done and new-to-Who director Sheree Folkson (good to see a woman at the helm) does a sterling job of bringing the story to life.  But the story itself is the poor cousin of the direction here.

So what was it all about? Well, Coal Hill school’s Mr Danny Pink and Miss Clara Oswald (Samuel Anderson and Jenna Coleman) are having a sleepover in the London Zoological Museum with a group of “gifted and talented” pupils when the Earth becomes covered in forest. Meanwhile, a lost little girl called Maebh (a very charming Abigail Eames) comes calling for the Doctor.  Mr Pink and Miss Oswald must lead their charges home and the Doctor must find a way to save the planet from the invading trees.

There are some positives about this episode. The Coal Hill kids are universally great value for money and provide some brilliantly quotable dialogue. Maebh is a delightful, yet sad mystery to uncover as she winds her way through the forest wafting away the questions that assail her.

There are some interesting insights into the relationship between Mr Pink and Miss Oswald, with Clara’s view of the situation as she longs to find out why the trees have invaded while Danny just wants to get his kids home. Clara also has to deal with some uncomfortable questions about the lies she’s been telling to cover up her double life; this time from Danny after last week’s challenge from the Doctor. There’s enough to have built up to the final two episodes of the series. What can be the final outcome for Clara of her dual existence? We can only wait and see.

Possibly the most interesting part of the story is the Doctor’s helplessness in the face of an invasion he can’t defeat. His desperation to save those around him is sad and troubling. He seems defeated as Clara chooses to go with Danny to try and get the children home. Clara not wanting to be the last of her kind and her letting go of the Doctor left a rather large lump in this reviewer’s throat.

However none of this can entirely make up for the frustration of a story that makes you wonder if you’ve nodded off and missed chunks. Maybe some key moments were left on the cutting room floor (or in the recycle bin). The reason for the trees is pretty obvious early on as the Doctor talks of a solar flare heading the Earth’s way, and the environmental message is a little over-egged.  The sub-plot involving Maebh’s missing sister feels unnecessary to such a degree that the final denouement with Maebh, her mum and said sister feels less emotional that it was probably meant to.

There are some prettily-done zoo animals - wolves and a tiger - on the loose that add some mild peril, but these, as well as the Coal Hill kids, feel as though they have less story than they probably deserve. Perhaps with less eco-story and less missing sister, (and possibly with an extra 15 minutes running time) these good parts could have been more fully realised. Sadly what we have is 45 minutes that are underwhelming in what has been, up to now, a high quality series. Which is a shame, because you feel that In The Forest Of The Night could have been so much more.

The mysterious Missy gets another look-in at the end of the episode, which leaves us all set for the final two-parter to finish Peter Capaldi’s very strong first series. Writing duties fall back to showrunner Steven Moffat and we’re promised the return of the Cybermen and Missy’s world of the Nethersphere, where some things could be worse than death. Gulp!

Did you know? Famous London landmark Nelson’s column has featured in several Doctor Who adventures including The Dalek Invasion of Earth, The Chase and Rose and the Doctor has mentioned that Nelson himself was a ‘close personal friend’.

Most impressive shot: An aerial view of London covered in forest

Best line: “I could save you”