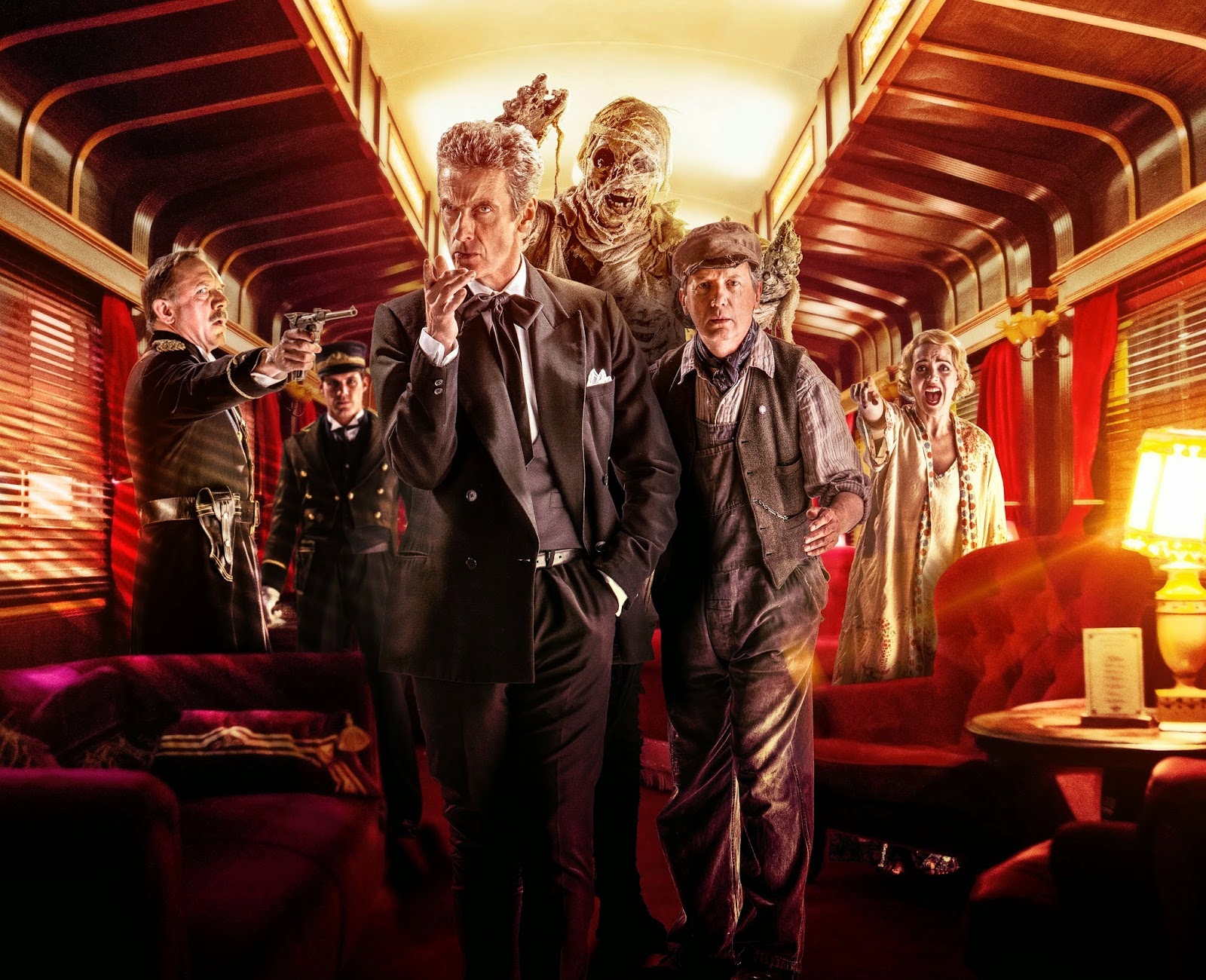 The Story: The Doctor (Peter Capaldi) and Clara (Jenna Coleman) meet up for one last hurrah aboard an Orient Express in space. But something is haunting the train. A horrifying Mummy that can only be seen by those it is about to kill. Once you see the Mummy, you have exactly 66 seconds to live. Can the Doctor defeat an enemy he can’t even see?

The pre-credits sequence for Mummy On The Orient Express is pretty frightening fayre for the viewer as we’re hit straight away with a Mummy-death attack on a 100-year-old lady against an on-screen clock ticking down from 66 seconds. And all of this aboard a beautifully opulent Orient Express in space!

There’s no mercy for old ladies or indeed the viewer in this latest episode. And this theme continues through an awful lot of the next 45 minutes.

Mummy On The Orient Express takes place an indeterminate time after last week’s Kill The Moon episode. Enough time has passed for Clara’s rage to have subdued sufficiently for her to agree to one last trip with the Doctor. With the title it’s got, you’d be forgiven for expecting a nice romp of an episode; what you get here, however, is a more sombre and quite sad affair as Clara struggles with her feelings for the Doctor, while he can’t entirely deal with her emotional response to him. It’s gorgeously scripted by Being Human writer Jamie Mathieson and of course it’s all once again wonderfully acted by Capaldi and Coleman.

But it’s not all sad goodbyes. There’s that Mummy to deal with. Drawing on the best Agatha Christie style puzzle-solving, the Doctor sets out to discover what this Mummy is and how to stop it. And he goes about solving the puzzle in the most brutal and heartless manner imaginable, even for this cold and ambiguous incarnation of our favourite Time Lord from Gallifrey.

Having variously teamed up with Captain Quell (David Bamber), Professor Emile Moorhouse (Christopher Villiers) and engineer Perkins (Frank Skinner - yes that Frank Skinner), the Doctor works through the evidence he finds in order to stop the Mummy (or “The Foretold” as he’s known). Unsparing with those who see The Foretold and who are about to die, the Doctor badgers them for clues as to what they see with no apparent care for the fates of those involved - “What you can see might save the next one”. It’s almost excruciating to watch.

His ruthless approach pays dividends as he discovers that the train’s computer, Gus, has brought together the great minds of the Universe to solve the problem of The Foretold. The gathered experts are akin to the profundity of professors in the “Roses of Success” part of Chitty Chitty Bang Bang with their beardy braininess, including the jolly decent Professor Moorhouse, who won’t go down without a fight.

Meanwhile, Clara is locked in a room with a huge sarcophagus and the brittle, fragile Maisie, granddaughter of the Mummy’s first victim. The two are given space enough to talk about the nature of Clara’s relationship with the Doctor in scenes that are breathtakingly shot with a focus on light and dark and the eyes of the women as they talk and try to find a way out.

And the locked room scenes are not the only good thing about Peter Wilmshurt’s direction. The on-screen countdown timers to each death are startling and horrifying as the seconds tick agonisingly away. And there’s an appallingly well-done image of the Mummy’s hand emerging from the Doctor’s face. Murray Gold once again pulls out a cinematic score, which is particularly poignant as Clara and the Doctor discuss the state of their relationship.

It’s worth looking at the supporting cast in Mummy On The Orient Express, who are all particularly good here no matter how long (or short) their screen time and Daisy Beaumont as Maisie is particularly smashing. But the main guest turn, Frank Skinner, deserves some scrutiny.

Skinner is a well-known superfan of Doctor Who, even making a brief cameo as himself in the splendid The Five(ish) Doctors Re-boot episode that was made as part of last year’s 50th anniversary celebrations. However, while Frank Skinner may be a superfan, he is in no-one’s world, a super actor and when we heard of his casting in this episode, we at SRCZ Towers raised a collective eyebrow. The good news is, our fears weren’t completely unfounded and Skinner’s turn as creepy/resourceful engineer Perkins is not actually horrible. The scene at the end of the episode where he leaves the TARDIS, aware of how travelling in it could change a man, you feel for the character and the actor.

Which leads us back to Clara and her last hurrah. By the end of the episode, the Doctor has lied and manipulated and even made Clara an accomplice in his deceit in order to achieve his own ends. Which once again this series begs the question about the nature of the man.  Admitting to Clara that he’d have carried on letting people die in order to solve the mystery of the Mummy, he tells her “Sometimes the only choices you have are bad one, but you still have to choose.”

Clara ponders what this does to a person - the making of impossible choices - as she stops to talk to boyfriend Danny. With a sudden change of heart that leaves you reeling, she’s changed from sad-faced last hurrah girl, to bright and chirpy “Let’s go!” girl. It’s all very sudden and slightly disconcerting, even if it’s more than welcome.

Where this leaves the relationship between our time-travelling pair, we can only wait and see...

Did you spot? A picture of a stick insect in a top hat when the Doctor calls Clara’s phone

Did you also spot? Grammy award-winning singer Foxes singing a rendition of Don’t Stop Me Now at the start of the episode

LOL moment: “Are you my mummy?”

Insult of the Week: The Doctor on Clara’s sad smile “It’s like you’re malfunctioning”

Face of the Week: The Doctor’s as Clara tells Danny that she loves him