Warning: contains spoilers! We really mean it. Big, massive spoilers! If you haven’t seen Dark Water, please walk away from this review until you have. 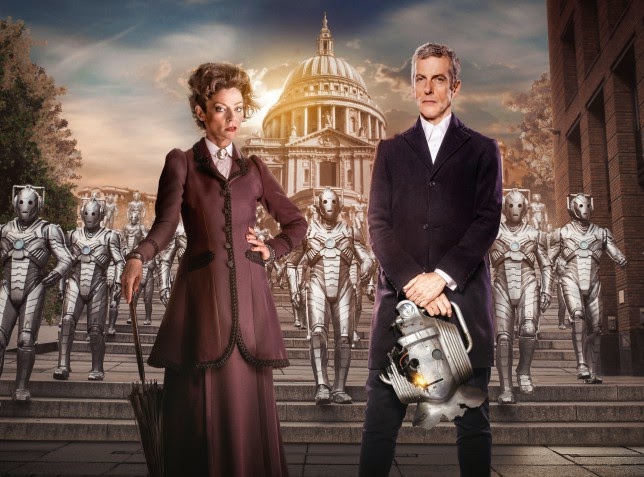 The Story: Danny Pink is dead! The Cybermen are back! And MISSY IS THE MASTER!

It’s so typical of showrunner and resident evil genius Steven Moffat to have hidden who Missy is in plain sight. We’re very proud of our spoiler avoidance stance here at SRCZ and we have to confess that when we watched Dark Water, the first of a two-part series finale, our reaction was slightly more Malcolm Tucker than Doctor Who.   But more of that Missy/Master twist further on.

Dark Water begins with a pre-titles shock as Danny Pink (Samuel Anderson) is killed just as Clara (Jenna Coleman) is declaring her love for him and getting ready to open up about her secret other life with the Doctor (Peter Capaldi).  Jenna Coleman has been superlative in this series and no more so than here as she grieves for Danny to the point where she manipulates the Doctor into losing access to the TARDIS by throwing all of the TARDIS keys into molten lava. It’s all a ‘dream state’ ruse by the Doctor, of course, but we see just how far Clara’s desperation will take her as she tries to make the Doctor go back and save Danny.

Plugging Clara once again into the TARDIS telepathic interface, which we last saw her do in Listen where she linked in to Danny’s timeline, the Doctor tells Clara that Danny must be somewhere because the TARDIS is moving.

Meanwhile, Mr Pink finds himself in the Afterlife/Nethersphere/Promised Land with the delightfully bureaucratic administrator, Seb (Chris Addison). Seb offers Danny coffee and forms to complete as he casually reveals that the dead still have a link to their bodies back on Earth. The consequences of this are brought to horrifying reality as Seb refers to blood-curdling screams as coming from someone who left their body to medical science.

Danny has to face his past as a soldier as he faces a boy he killed while in action. He also ends the episode with his hand hovering over the ‘delete’ button for his life on an iPad.  This is hard stuff for a Saturday evening children’s television show, but terrifyingly effective nonetheless.

Talking of terrifying, we knew from BBC publicity for Dark Water that the Cybermen were back, but the reveal was brilliantly executed. Giving hints in the Nethersphere’s 3W logo (in the shape of a Cyberman eye) and the mention of invisible exoskeletons surrounding the tanks filled with skeletons immersed in the titular dark water in Missy’s domain; the final realisation of the Cybermen and - most importantly - the source of them (the recently deceased) was done with style and confidence.

Which brings us on to Missy. There has been much debate in recent years about the possibility of the Doctor being played by a woman. What Steven Moffat has done instead is whip the rug from under us to give us a female Master.  While fandom may be out with fire and pitchforks hunting down Moffatt after the broadcast of Dark Water, we would do well to remember that Neil Gaiman’s excellent The Doctor’s Wife mentioned the Corsair, a Time Lord/Lady who had swapped gender. So while the the reveal of Missy as the Master may have been a shocker, it’s not necessarily because of his/her new gender.

Michelle Gomez is a casting dream in terms of playing this iconic role. A perfect foil for Peter Capaldi’s severe Scottishness, Gomez also brings the manic, mad-eyed glint we saw in John Simm’s portrayal of the Doctor’s nemesis as well as the Master’s traditional inappropriate appropriation of technology and his inherent untrustworthiness and deceit. There’s also a glimpse of the unpredictable, murder-y side as Missy dispatches the lovely Doctor Chen.

By now the internet will be afire with talk of Missy kissing the Doctor - with tongues! - and what this means about Missy’s character. Here at SRCZ Towers, we’re inclined to believe it’s typical Master mischief at work, but we’ll wait to see how this story plays out.

Of course, all two-parters must be judged as a whole. Dark Water is a brilliant opening episode to this series’ finale and we await the final episode with eagerness, but also no small degree of dread as this consistently high quality series comes to an end.  How will the Doctor deal with Missy and the marauding Cybermen? Is Danny dead for good? If so, what will this mean for Clara. As you know, we’re not ones to speculate.

Did You Know #1?: The Master was a childhood friend of the Doctor on Gallifrey. They both broke the Time Lord rule not to intervene in events, but whereas the Doctor has generally been a force for good, the Master has sought to rule and cause chaos. While they have an ambivalent relationship with each other, neither can imagine life without the other.

Did You Know #2?: The Cybermen on the steps of St Paul’s is an iconic image from second Doctor story The Invasion

Best Line: The Doctor to Clara “Do you think I care for you so little that betraying me would make a difference?”

Second Most Welcome Return of the Week: Sheila Reid as Clara’s Gran.