When Madonna suddenly announced the release of six tracks from her next album Rebel Heart, due in March 2015 via pre order we were intrigued. That’s potentially half an album and it’s always frustrating to have half a product but… we always welcome new material from Madonna no matter how mind boggling it can occasionally be. Her last release MDNA was largely excellent, a vast improvement on the still underwhelming Hard Candy but what will Rebel Heart bring? Let’s check out the songs released so far… 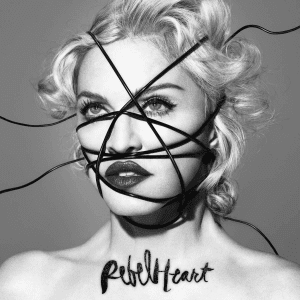 The first track on Rebel Heart opens promisingly, with an off kilter production soon introducing 80’s style keyboard stabs and pumping beats that transport the listener back to two decades ago. There’s an instant quality to the song, the production just one step away from too clean but as an album opener it’s a good proposition.

Using what sounds suspiciously like the melody line from unreleased track Pala Tute, Devil Pray is actually rather enjoyable. It’s comparatively stripped down quality is a winner chez #SRCZ and it’s nice to hear the more thoughtful side of the artist coming out rather than the more recent dance focused music. This will definitely be a live favourite, perfect for the traditional ‘Madonna gets her guitar out’ moment with a dance breakdown to boot. It’s also possibly one of her best songs in a while, lyrically and production wise.

Another slow intro, just M vox and mellow synth lines and it’s a winner. Madonna does good ballads and this comes from the keyboard of someone who is distinctly averse to ballads in general. As a ballad this works well, the lyrics not too complicated and easily remembered. Not one of the best Madonna songs for sure, but far from bad even if it doesn’t break any boundaries.

Getting past the needlessly confrontational title, Unapologetic Bitch is really rather good. The reggae vibe is a new one for Madonna and we can certainly appreciate its groove. Lyrically it’s the common guy (with a small g, note) dissing formula, (‘You never really know much you miss me…’) but it’s easily got by and sonically it sounds good. Pass mark!

The last time we met Yeezy on an M track was back on the rather uninspiring Hard Candy album back in 2008. Kanye is producing on this occasion and the result is much better. That ego is legendary but his production is fantastic. Illuminati is an initially odd listen, but grows on the listener very quickly, with a killer chorus that is genuinely edgy. Even the small rap from Nicky Minaj works well!

Hmm. The last time Nicky Minaj turned up on a Madonna record it was on the still jarring (but still curiously catchy) Gimme All Your Love and in the Madonna singles stakes, it’s still an odd one. Bitch I’m Madonna is unfortunately in a similar vein. It’s less candy coated but ultimately it doesn’t serve any other purpose than to say ‘Bitch I’m Madonna’. (Which is a brilliant title by the way!)

The verdict so far then is a good one. As with any Madonna release (and Rebel Heart has 19 tracks according to iTunes) the true test is the whole album. With the title it has, this could be something quite special. Just as there were fillers on MDNA, there will be fillers on Rebel Heart most likely. But one mans filler is another’s instant classic so, especially in the case of Madonna, what do we know?!

The verdict so far: Getting There!
Rebel Heart will be released in full in March 2015 and features production from Madonna, Diplo, Kanye West, Billboard, DJ Dahl and Blood Diamonds.