All the ingredients are here – a big house, a seasonal holiday and a classic case of the audience knowing more than the characters. 1974 saw the release of the horror classic perfect for more than one season – Black Christmas. 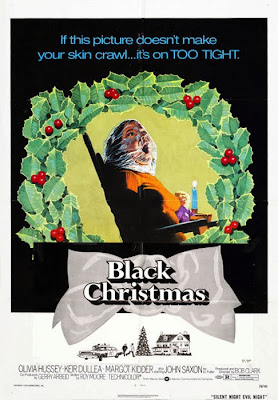 This genre classic, later remade to somewhat less effect, is still surprisingly watchable. The words horror classic can often give you only a very vague idea of the films good qualities and in Black Christmas much of the content is still very watchable. That’s not to say it’s any way a bad movie – far from that.

As a film ages the cracks around the edges, be they technical or contemporaneous can distract from its enjoyment – but this clever Canadian film has very little of this. From the unsettling intro when we see the unnamed and only ever seen once killer, (when his eye ball creepily peers from behind a curtain in the killer final sequence. Literally, perhaps – the narrative is deliberately vague), enter the sorority house  to the perfect sound design that makes the ring of the phone a prospect more scary than it probably ever is in reality it’s a film that may take time to get going but it’s well worth the wait.

With the acting well underplayed and never feeling like the kind of overacting common to many in this genre you also get to feel the fear in a manner as natural as it possibly can be without being there. Indeed, the film is in many ways a stepping stone into the Slasher genre that would soon spring up in the late 70’s without its familiar genre title in place yet. It’s an unusual film in that there is little in the way of sex or gore but much in the way of lingering tension and fear associations with everyday objects.

The central premise, based on the Canadian urban legend of ‘The Babysitter and the Man Upstairs’ and imbued with a smattering of real life murders, is chilling and very effective. You know just how you would react in such a situation – and the fact that most of the characters are kept ignorant of the killers presence in the attic (where even the police fail to look, apparently – you’ll know what we mean if you’ve seen the film’s concluding minutes) serves to add a bit more credibility to the narrative.

There may be no killer Santa’s, tinsel acting as hanging rope or anything that is really that seasonal or shiny but Black Christmas transcends it’s punning but still brilliant name by giving you genuine shock, a truly innovative ending that would still be brilliant today and making the ring of the telephone something you would never have associated with fear. This and the excellent central performance from Olivia Hussey makes this a definite must watch for anyone who has or hasn’t yet seen it…