As last week crawled along and the city was reminded of an elusive spring, the Liverpool music scene was starting to buzz with its own excitement. For most locals, the Baltic Triangle is an abandoned industrial estate dotted with a handful of independent businesses – but take some artists and give them the keys to an abandoned empire of warehouses, and you know sooner or later something big’s going to happen. For one weekend of the year, it’s where Threshold Festival of Music and Arts takes place, heralding the slow-coming summer and the start of a new gigging season. (And even the ever-present developers inching closer and closer to the heart of the Baltic isn’t enough to dampen the enthusiastic buzz as Friday rolls around.) 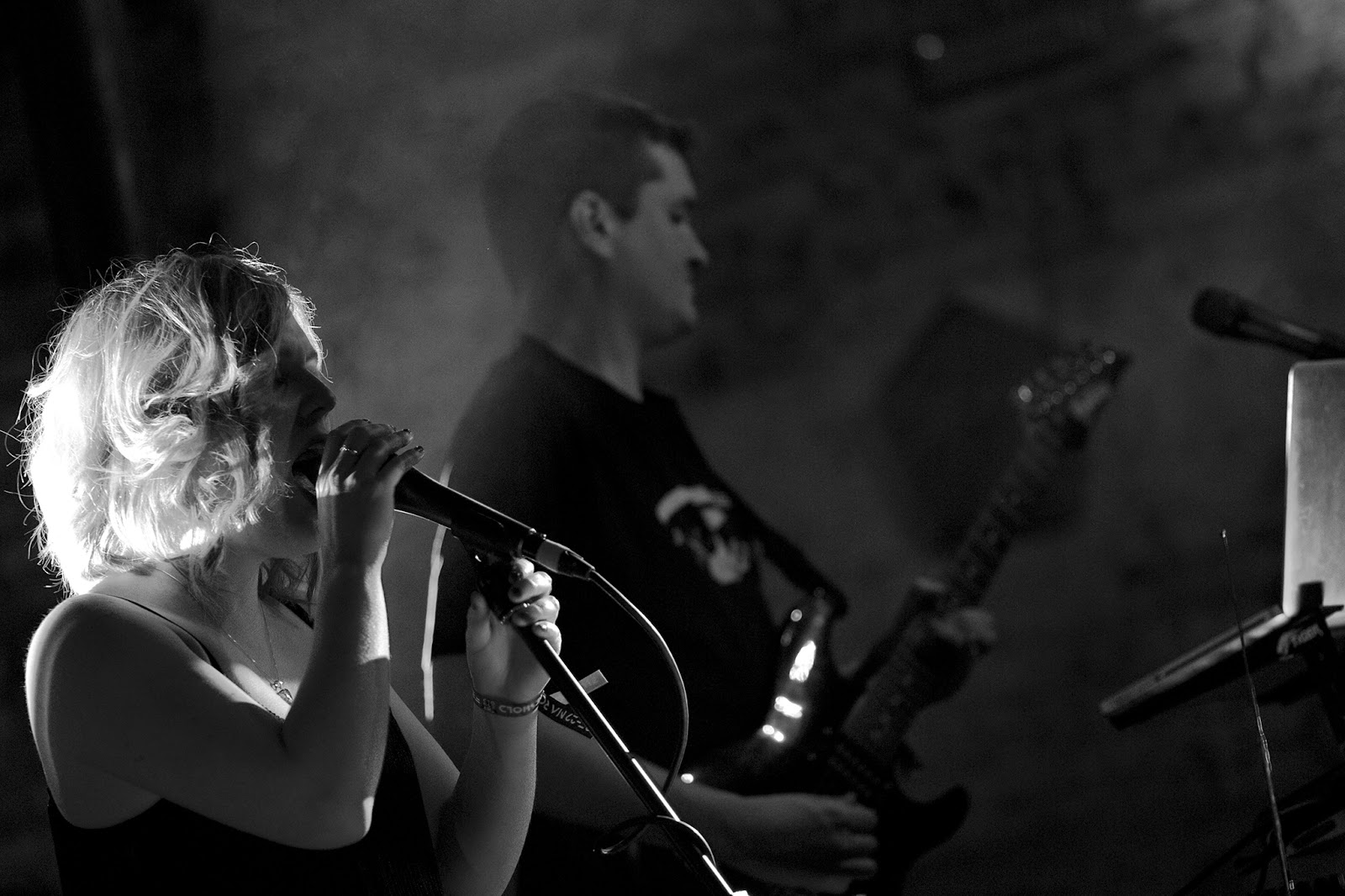 The first stage that I find up and running is 24 Kitchen Street, where INKbeat is setting itself up to do its usual thing– and by ‘thing’ I mean ‘an immersive experience hosting an interactive drawing performance with an evening of live music and live art’. A table which looks like every art student’s wet dream and colourful projections scattered around the room make me feel like I’m in the right place and, with the smoke machine ready to go, Forthaven unceremoniously shuffle onto the stage. The first billed act of any event always has a bit of a tough nugget to crack - but as deep staccato beats gradually filled the room and more precocious festival-goers come in, everyone’s getting well in the Threshold mood. Vocalist Emma Rose completes the line-up as they eagerly dive into their set and hold nothing back. As intricate electronica patterns merge with a seductive, supple voice, Forthaven are having the time of their life and play an all-out set that leaves everyone wanting to hear more. 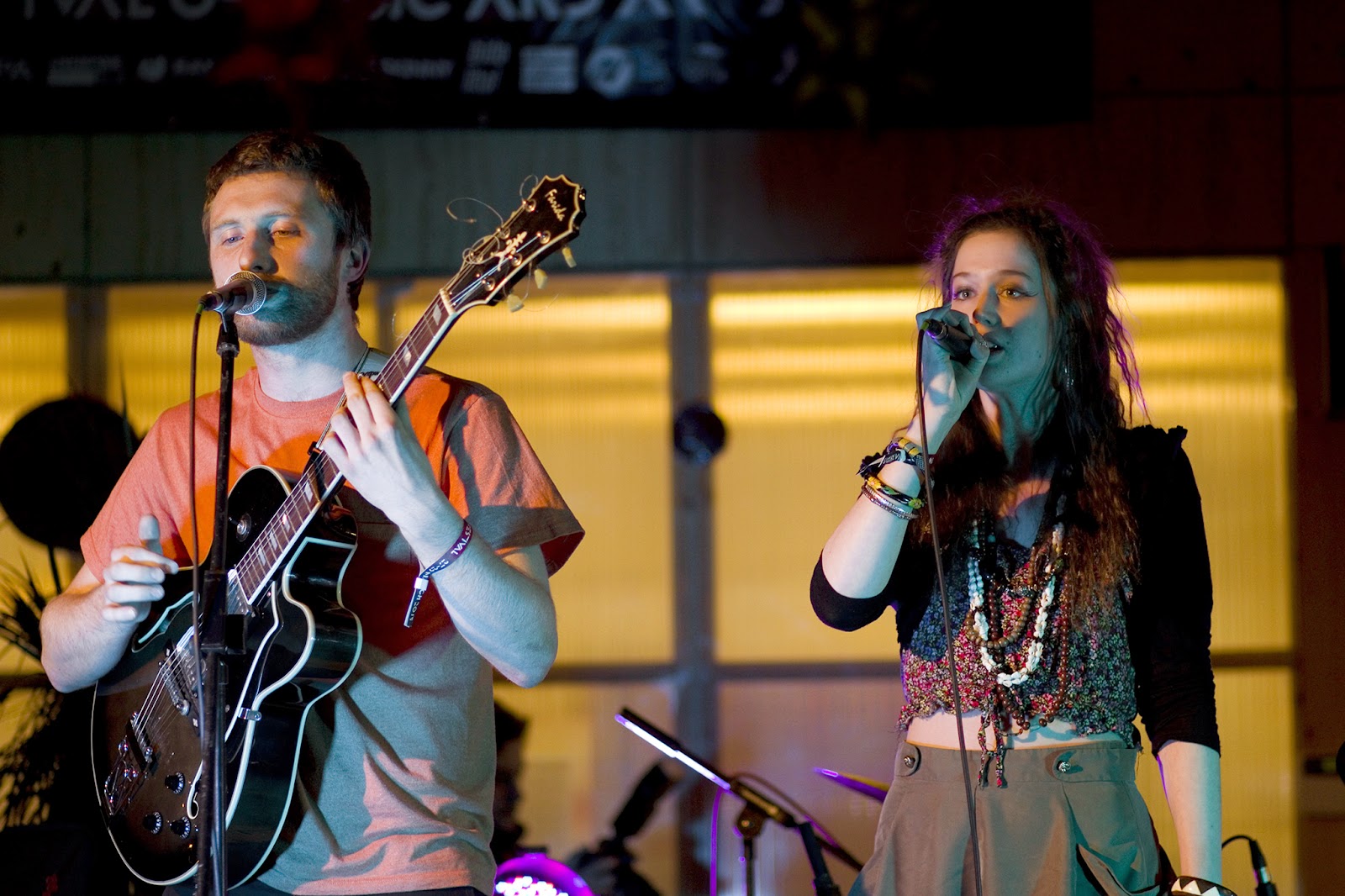 It’s then back to Unit 51 for me for a bit of a warm-up. The de rigueur opening is well underway, with all its official speeches, thank you’s and sacrificial offerings to the gods carried out in all cardinal directions, and I discover to my delight that there’s complimentary wine. As I hang back for my first must-see of the night, the festival feeling is definitely resounding among the scattered crowds. And next to the stage is Lyons & La Zel, a two-people tour-de-force through a mix of hip-hop, soul, jazz and funk. With beatboxer/guitarist James providing a rich backdrop for Lea La Zel’s playful, warm voice, these two insanely talented musicians craft their own organic sound that makes them stand out in the ‘acoustic duo’ box (or in any other boxes, that is). 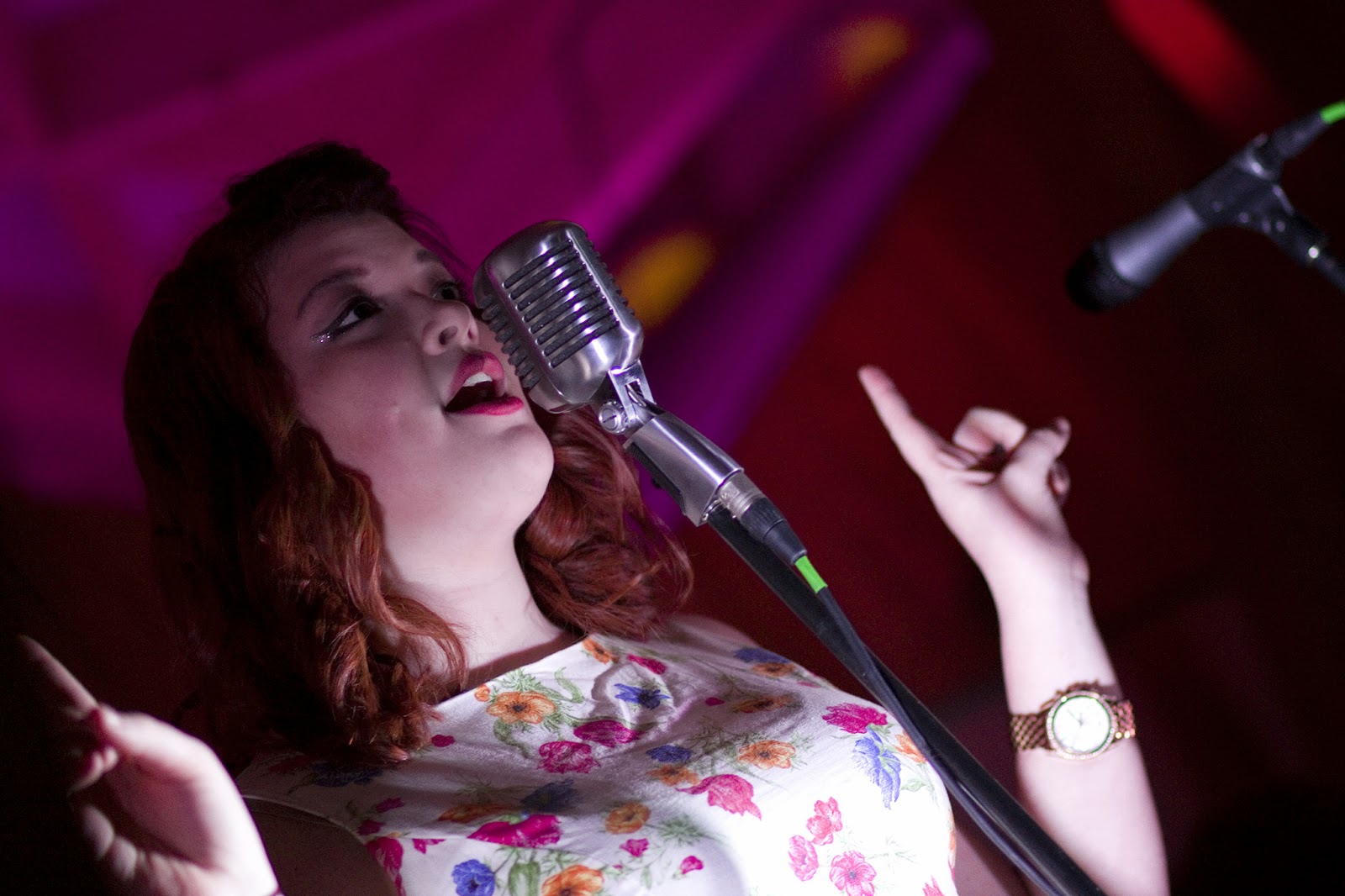 Constellations is the Baltic’s latest addition to its ranks of creatively-inclined venues, and it’s where big things are planned for the weekend. As DeMille kicks everything off in the courtyard, the cold starts to feel a little less biting and the audience’s feet more prone to moving. Blending a lot of jazz and blues into their own neat vintage-flavoured package, this lovely gem of a band wraps it all up with a smooth, velvety voice that can croon, comfort and warm you up like no amount of spirits could. Their original track ‘Devil Has Met Me’ showcased a talented group of musicians who are going back to basics – but before anyone realizes, the end of their set is about and everyone’s left all milk-shaken up and wanting more. 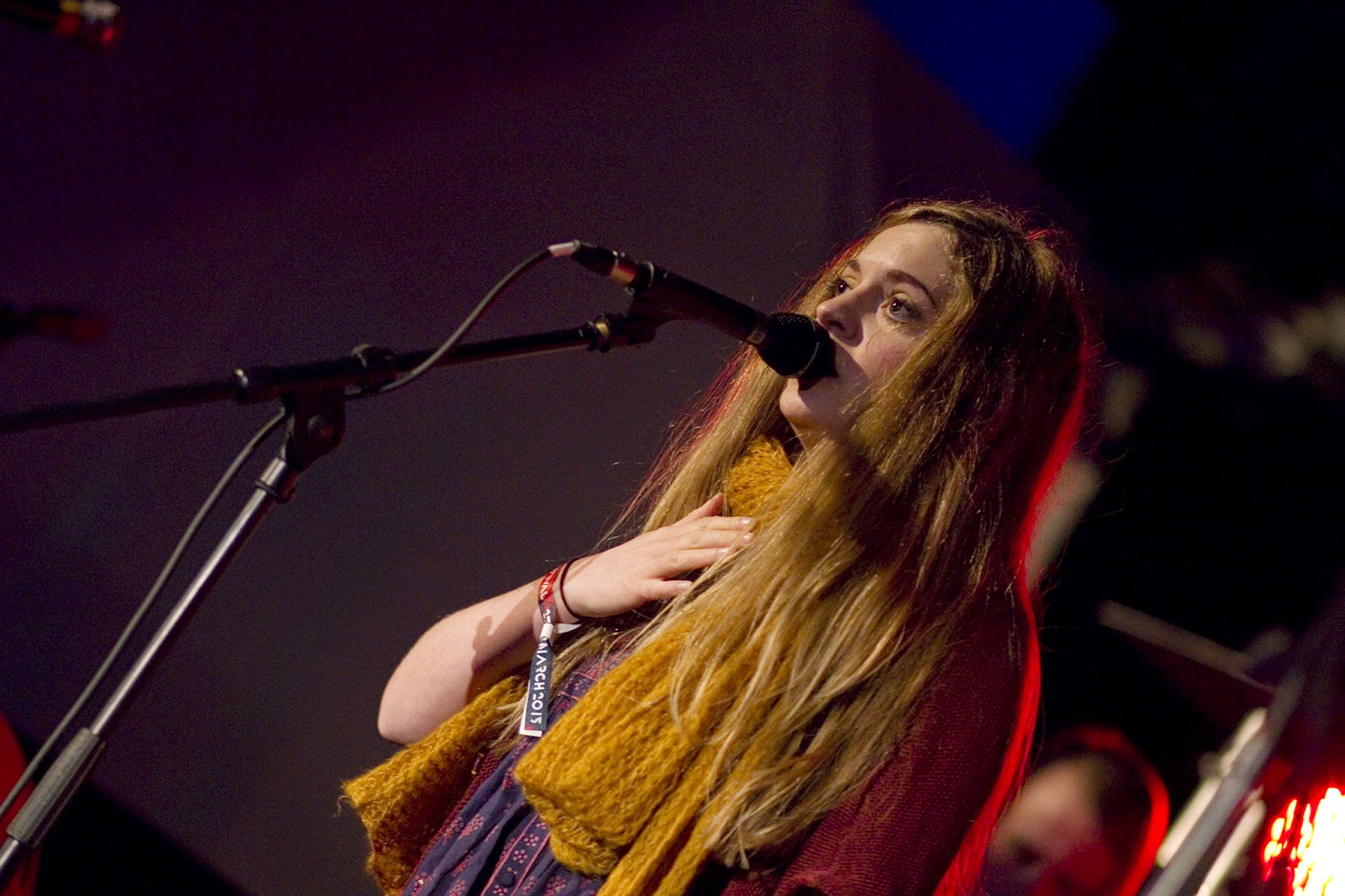 But there’s no time to languish as more music starts inside. Locally, as far as bands go, things can get a bit repetitive – but it’s not every day that you see bands like Kalandra. All excellent musicians in their own terms, they mix and match Scandinavian folk with alternative rock to birth a sound that’s quite particular. Both lyrically and musically, their songs are the gift that keeps on giving, each time revealing themselves as a rich-painted story. Singing about love and longing, nature and man, they’re a band that have grown leaps and bounds since their last Threshold performance, and they show no sign of stopping. Delighted to hear some unfamiliar tunes, it seems that Kalandra are growing more comfortably into their own sound; and seeing them perform live with a bucketful of good chemistry and enthusiasm between them is always a special experience in its own way. 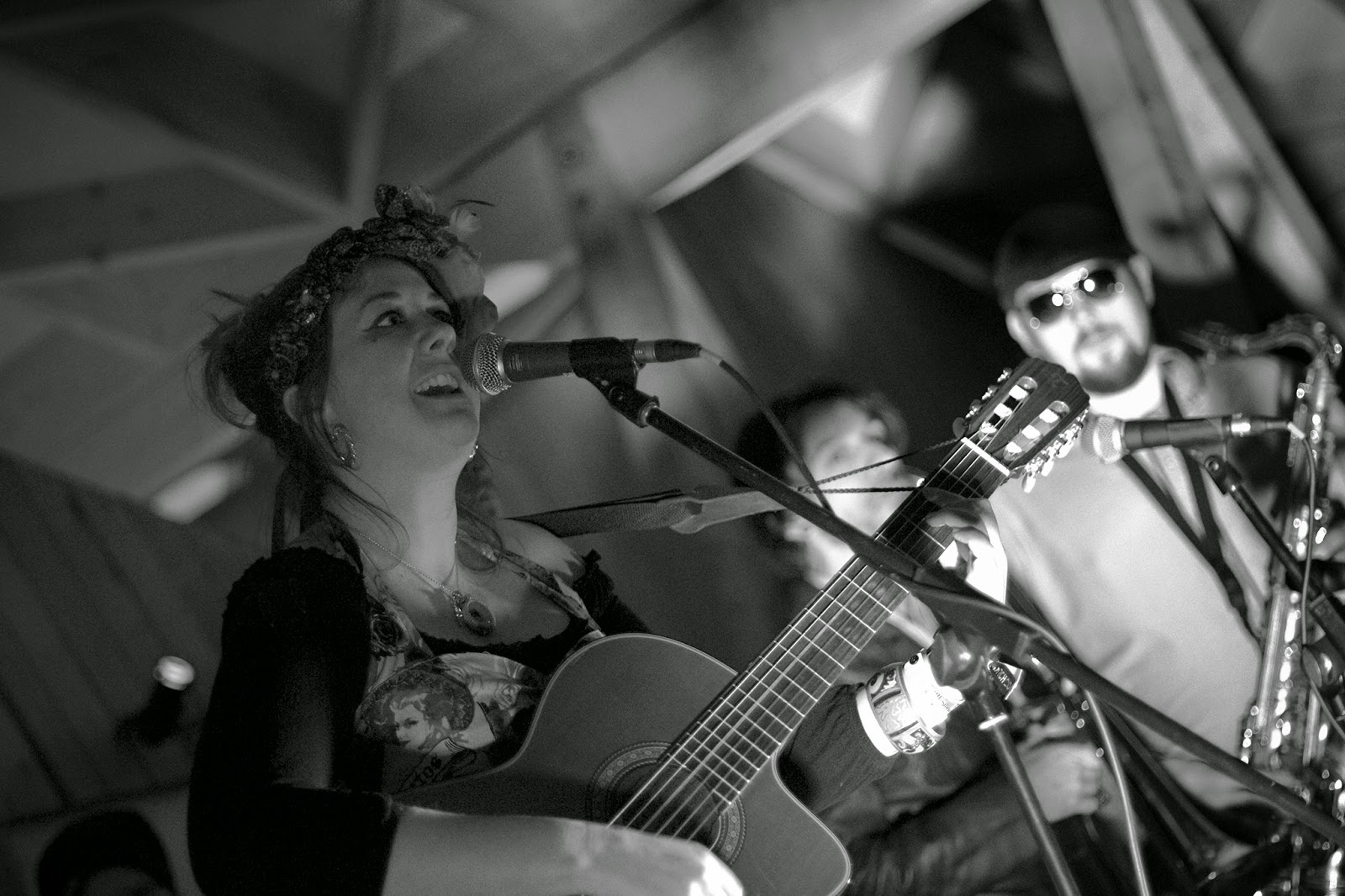 As the all-out blast leaves me in need of a breather, I return to the courtyard – where a different kind of energy’s taking over the scattered audience as eight people are doing their best to fit on the stage. Rumjig, somewhat an ambulatory party in their own sense, is a lot like the Long Island Iced Tea of bands: you’re never entirely sure what goes in it, but it’s delicious and it does a hell of a job of getting you where you need to be. A lightning bolt of energy, brass and good vibes, they’re just what’s needed on this cold evening. Skillfully meandering through ska, reggae and funky rhythms, Rumjig’s beats have lead singer Julia’s voice skillfully dancing all on, in and around them. As one of their older tunes, ‘Hyper’ brings out some enthusiastic woos from some knowledgeable audience members and plants a massive smile on everyone’s freezing faces. 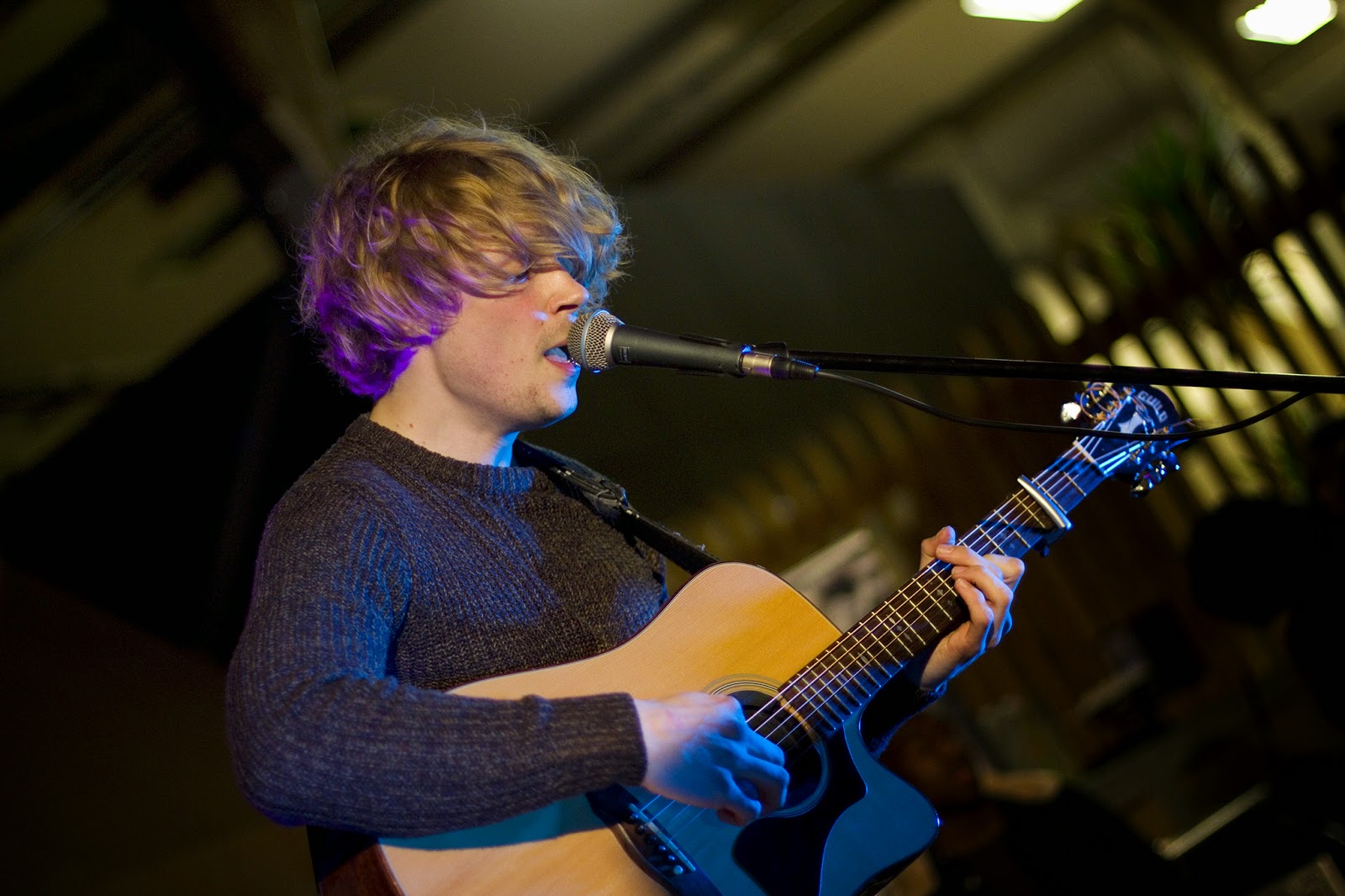 With some feeling restored to my extremities, I decide on a bit of a breather and explore what the other venues have going for them – and my timing is spot on as the next act is just getting ready to start in Unit 51. Liverpool-based Alex Hulme is the kind of singer-songwriter that slowly draws you into his world: with layered tracks courtesy of his own looping station, he creates a vast mellow, folky sound that showcases some talented writing chops. Singing with an immensely pliable, melting-over-your-soul voice, and with his own songs being catchy as they are uplifting, Alex Hulme has his audience rooted for his entire set and afterwards everyone’s feeling just a little bit more brave to take on the world. 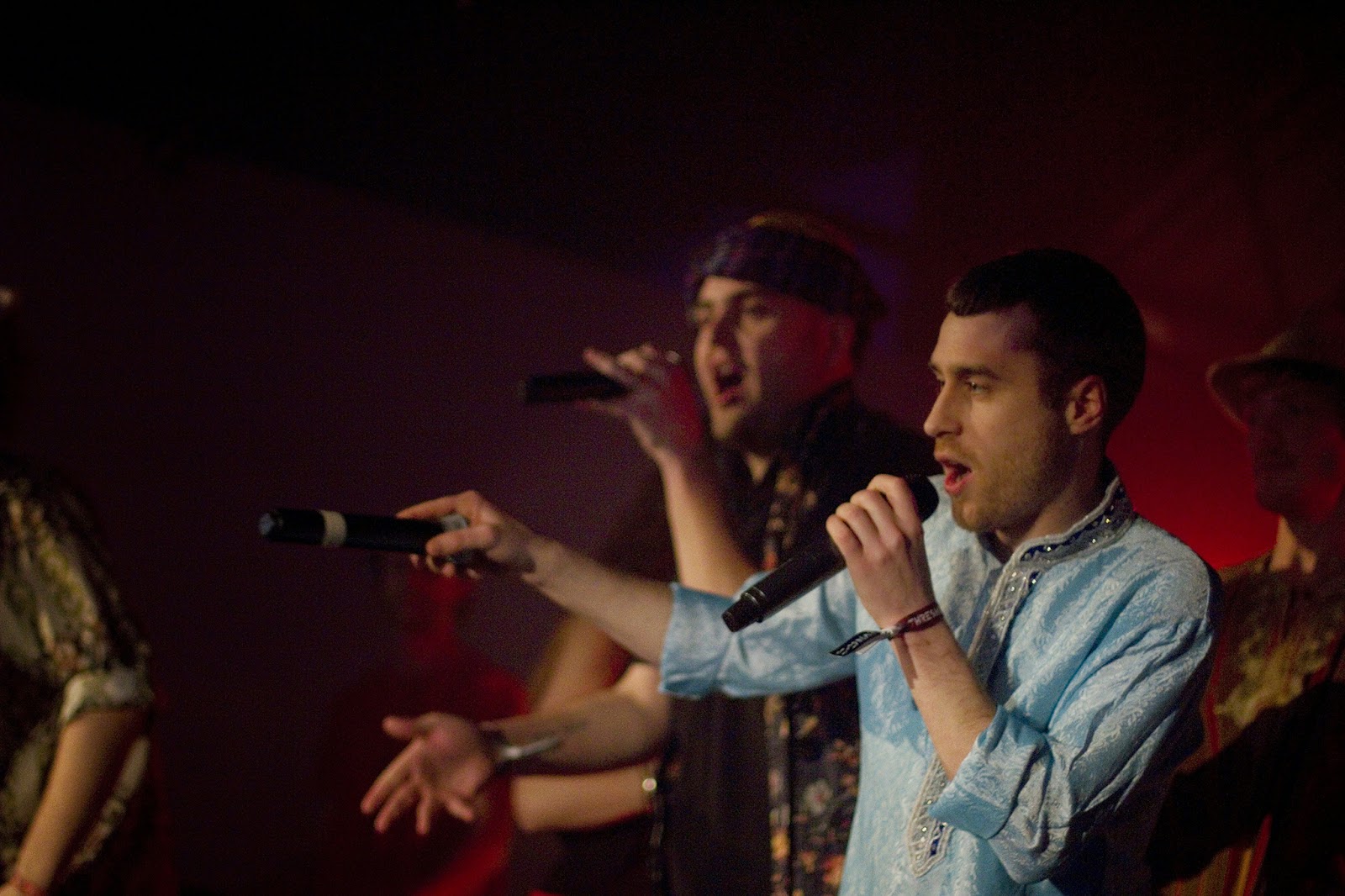 Mellow, acoustic tunes soon become a distant memory as I decide to pop into District for a quick sniff-out of the situation. Jazzhands, a band I singled out based purely on their name, is well underway with their set – and as the Threshold gods would have it, I happened to walk into one of the best cowbell performances I’ve ever seen. Seeing this band soon turns to a delight of epic proportions: a six piece troupe of crazy-extraordinaires riffing on a saxophone, bass, keys and totaling an impressive three drummers. Intent to bring the place down through sheer loudness, the three drum kits are put to good use as they make their way through a variety of rhythms and songs. Quite punk in their over-the-top, all-out show, their music follows its own eccentric format as I can hear furious rock, the saxophone’s sweet soul/funk nods and quite a few Balkan tunes and patterns that make my feet get a-tapping. But as much as I have trouble figuring out what exactly’s happening there on stage, Jazzhands are having the time of their life up there and I can’t tear myself away for one moment until the final notes have been played.

I decide to make a quick stop by the Baltic Social to test the temperatures. And as the next band is setting up and I’m thinking that tonight couldn’t get any better (or any more random), lo and behold, a fountain of sound erupts from the amps. My brain reacts quite viscerally, and there’s so many things happening at once: sweet guitar crunches hovering over a flawless rhythm section, playing catch with each other and filling the venue’s most intimate corners with what I can only describe as the Cousin Avi sound. And all over this presides the lead singer, clear vocals backed by an impressive set of lungs that get down and dirty in all the right places.

With a full-blown bag of enthusiasm and the musical skills to boot, Cousin Avi sounds the musical legacy of a love affair between James Brown and Rage Against The Machine, yet all the while they sound fresh and they’re well on their way to ‘nothing can stop me’ land. Quite unique in their marriage of blues and funk, reggae and soul, all tied up in a neat rock show package, these guys seem intent on a musical revolution of epic proportions. Hands down the best musical discovery I’ve made in a while – and the weekend was only beginning!