The Eye, in its original form as produced by twin film making genius’ The Pang Brothers, put them on the map. Their distinctive visual style and fast cuts with fast paced editing and sound design makes for an impressive and often agonizing watch in an often tense but never gory psychological horror movie. 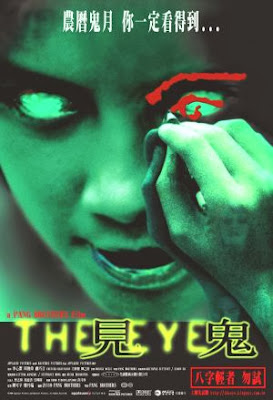 But with such distinctive flair at the helm there is more to the film than cheap visceral shocks – even the sight of a roadway full of burnt corpses in their vehicles is done so elegantly it’s more of a grotesque sculpture than a visceral scene. The horror is drip fed as Mun, freshly out of hospital from a cornea transplant, begins to see more than just the beautiful rays of the daylight with her new eyes.

The ghosts she sees cause her to withdraw from the world before being lured back by the “traditional” handsome surgeon Dr. Lo again only to find her eyes deceiving her once more. When she fails to recognise her own face in a photograph it sparks a smashed mirror and a trip into Thailand to seek the identity of the anonymous donor of the corneas.

Many who have seen this film have noted just how subtle it is compared to other genre films – and in its subtlety lie’s its strength. The acting is pitched perfectly by the cast, with the creepiest of moments being underplayed beautifully. The very creepy scene where a ghostly old man is standing behind Mun in the lift of her apartment building  and the lift aches up towards it’s agonizingly double-digited destination is a perfect example of tone and measure making a performance all the more scary.

Like the best Asian horror, The Eye is backed up by a well developed (although not immediately engaging) back story and we know just who is who from the well planned performances and editing that raise the tension exactly when it needs to be and not a second before. The films climax in Thailand takes a warmer tone than the inner city set first half and the directors make sure we’re right there with Lun and Dr. Ho as they survive the traffic disaster predicted by the cornea donation giver barely – and return back to a form of safety as we see that sight is sometimes not all it’s cracked up to be.

Of course, this was remade for American audiences a few years later but didn’t have the same hyperactive sheen the Pang Brothers very distinctive vision sculpted so well.
The Verdict: Subtle yet chilling film making from The Pang Brothers.