Ah – the ‘banned’ film. The addition of that tag often ensures films a healthy profit and although this is titled Second Looks – Cannibal Holocaust is not one you’d really want to watch again without good reason... 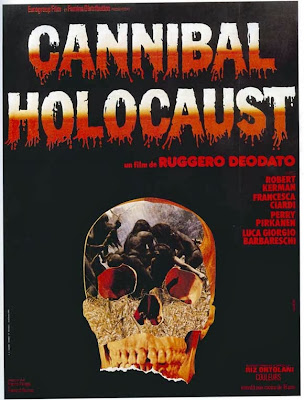 “I wonder who the real cannibals are…”

But just why it ever gained its reputation is somewhat unclear to these eyes. Yes – there are some scenes that are somewhat uneasy to watch but it’s rather obvious that they are staged. As a pseudo-documentary it makes some fair points about how easy it is to judge a society based on its outward appearance and actions but its production values and acting standard often leaves much to be desired. But in the light of its then innovative plot format and ideas that were later used in films such as The Blair Witch horror it does bare a good re-examination.

Indeed, the only parts of the film that genuinely strike today’s viewer as in any way objectionable are the scenes where animals are genuinely slaughtered – with the camera going far too close to examine the gory details afterwards. The slaughters of the missing film crew are by comparison tame considering just how repulsive the idea of even contemplating the animals pointless deaths actually is.

There are most certainly moments here that make this a film you wouldn’t invite the neighbours round to watch but then again the imagery on display throughout the film is nothing so shocking when you look at recent films such the unending Saw series or the plain unwatchable Human Centipede. But if you enjoy seeing the birth of an idea then it’s a film that is an essential watch.

Having enjoyed many of the films previously dubbed ‘banned’ for their somewhat laughable special effects on occasion the experience of Cannibal Holocaust is one that didn’t exactly shock (apart from the animal slaughter) or even provoke that much of a huge reaction in this writer. And that is all part of the reason why it’s almost enjoyable – it does have some good points but not enough to save it from a reputation it clearly doesn’t deserve.

But let’s be honest, we don’t watch films on the banned list expecting quality do we? No – we want action, guts, blood and perhaps the odd bit of sex on screen. At least, I’m guessing that’s why Cannibal Holocaust has gained it reputation. It’s saving graces are little touches rather than large gestures and I’ll go through some of them below.

First up, it’s soundtrack is very effective, adding immensely to the jump out of your skin factor on occasions when the special effects have no intention of doing so. The actors also do a good job with a script that relies in visual imagery rather than nuance - and it’s difficult to compete with a naked corpse impaled on a wooden pole in the horror movie world. The fact that a magistrate thought the film was real at the time speaks volumes to the reception it received – and soon became reputedly banned in over 55 countries.

To our eyes it’s not beyond obvious that it’s not real but for a director to have to prove that his actors are still actually alive to a court is one feat for film maker authenticity. The aforementioned commentary on perceptions in society is perhaps still valid today – after all, how would you react to meeting a tribe of cannibals in the South American rainforest? You probably wouldn’t be too keen to stay we’d wager!

But the manner in which the film crew degenerate into uncouth savages themselves, having sex on camera and attempting to rape a member of the tribe is truly the point where we realise that in a way – they deserved to be eaten. If not literally then most definitely metaphorically. The network editor’s words after watching the footage with the professor at his side are perhaps the most apt of the whole movie – “I want that footage burnt. Destroy it all!”

But in these days of Big Brother and CCTV on every corner it’s common place to see behavior very close to that of the film crew on tape – and isn’t that just another form of modern horror?

Cannibal Holocaust has a reputation for gore – and it’s all here but look at the story behind it and you’ll see just how much it becomes a self fulfilling prophecy for the characters in the film. It’s not the cannibalism that strikes you as much as the astoundingly crass portrayal of humanity, disturbing people that really don’t need disturbing in the name of entertainment.