It’s the film that launched the undead pale faces of a hundred imitators but is The Grudge, one of many films in the series, still a watchable prospect? 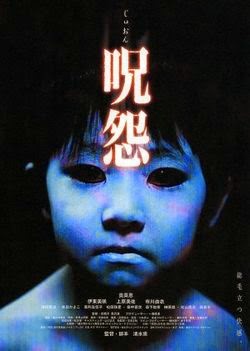 When Ju-On: The Beginning of the End was released in Japanese cinema’s in 2014 it was a fresh look at a franchise that has seen more than a few films. (Including the American remake series, also due for a reboot according to rumours) In the beginning though the series began with two straight to video movies entitled simply Ju-On  and Ju-On 2. Whilst they certainly set the  blood trail flowing it wasn’t until the cinematic debut of third movie Ju-On: The Grudge that things got really interesting.

It was at this point that pale faced, ghoulish women would become a more notable staple of Japanese horror than previously and it's certainly helped to engrain the idea that the country's cinema is amongst the most innovative. This first cinema based outing is notable for it's very stark production values. There's a lot more budget than the video releases but it's not like director Takeshi Shimizu is piling on the special effects in any obvious way. The scares are uniformly organic, created using noise, shadow and imagination more than anything else and it is perhaps this approach that caught the eyes of the Western cinema audiences the most.

The Japanese cinema going audience, a very picky bunch when it comes to the art form that is cinema, are aware of everything and when you watch Japanese cinema the visual concerns go hand in hand with the dramatic concerns, although Ju-On: The Grudge is shot in a grainy, minimalistic manner that seemingly emphasises the uglyness of  the surroundings it's set in.  This is no where more clearer than in people's homes. A Japanese home is rarely untidy but here we see dilapidated living rooms and kitchens, darkly lit scenery that contrasts starkly with the idea of a happy home and this visual juxtaposition contributes much to the dark atmosphere of the film.

The Saeki house, home to the vengeful ghosts of Kayako and the frankly creepy Toshio, is the key element here. It turns upside down the happy elements of home and all scenes set in the building are almost unbearably claustrophobic. Add in the non linear narrative that characterizes the series and most importantly keeps the audience guessing and you have a bold film that seeks to do exactly one thing above anything else. That is, scare you to death. Even on repeated viewing there is still room for a shock and the scene that is most effective?

It's the segment where character Hitomi escapes to the presumed safety of her bed to hide from the frightening apparition on her television and discovers she is not alone beneath the sheets. When the film concludes, somewhat vaguely, with the main character's corpse stuffed into the attic of the Saeki home, face pale and bloody, we should be confused but somehow it works. The curse is timeless and will go on...

In conclusion then, Ju-On: The Grudge is a fine film, perhaps the best of the series in it's innovation, that is followed up by sequels that are often random and haphazard even with the non linear narratives at play. It's worth picking up the original straight to video films if you can find them  but this film is the perfect starting point for the journey.