A second album from Stealing Sheep was something many have been anticipating and finally, it’s here! Will their follow up to the still very listenable Into The Diamond Sun impress or will it not? Read on to find out… 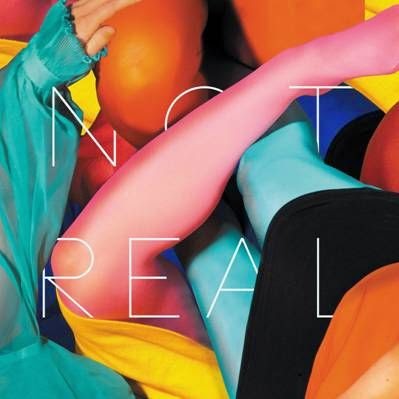 When the second album from Stealing Sheep was announced it was to great excitement from #SRCZ. So listening to the album was very much of an experience for us and if you were only aware of the psychedelic arrangements of their debut full length then it was certainly a surprise when the electro based sound of Not Real kicks in. Switching Dream Pop for Electro Pop was a good move indeed and if you liked the first single and title track Not Real then you’ll be very much into the music presented here.

Just like the neon tri-color sleeve art, (perfectly pitched for vinyl, by the way) the music shimmers in a similar way Into The Diamond Sun did but with more force than before. The electronic textures are warm but moody and they envelop the listener into their sonic world perfectly. For those who have been with the band since the early EP’s there are some elements of that sound to be found here as well.

Once you’ve stopped looking at the fascinating  cover art the music begins to take you over and over the measured number of ten tracks, two less than previously and to great effect, the music pulsates along with the interludes barely noticeable. That’s no bad thing when the songs keep your ear on them whatever else is going on. Highlights include the initially rather unfamiliar sounding but soon firm favourite Not Real and it’s accompanying video which echoes the album’s colour scheme delightfully.

Elsewhere Greed, the second single from the album, cuts a darker tone with it’s mournful but engaging brass section made good use of and the lyrics distant but perfect in their off kilter placing in the mix. As the album goes on then, the songs get ever more fascinating and experimental and it’s nice just to forget any concept of words and just let the whole thing soak in without thinking too much.

Stealing Sheep’s music has always evoked a sense of fantasy and it is here that it’s acknowledged fully. From the album title to songs such as the mesmerising Evolve and Expand, best described as modern take on one of The Velvet Underground’s famously off kilter album tracks in its sense of being almost there but not quite, but you still like it whatever it is.

The band have said that they want visitors to their live shows to feel like they are in a fantasy and with the set of songs on Not Real they have the perfect kit for creating just that sensation. The mixture of electro melodies, meditative melodies and dream like lyrics comes to a perfect summation on Love, near to the album’s end. The melodies are warm but delicate, electric but dream-like and above all propulsive.

If you have any need of escape from the world at any point then Not Real is the perfect companion to that very necessary trip and Stealing Sheep have once again proven their music is truly worthy of the hype that surrounds them with this second album.