It’s usually a cert that we will love anything that comes from the wonderfully diverse world of boutique label Blue Tapes and X Ray Records. This stunningly hypnotic release from Benjamin Finger is not about to change that in the least. 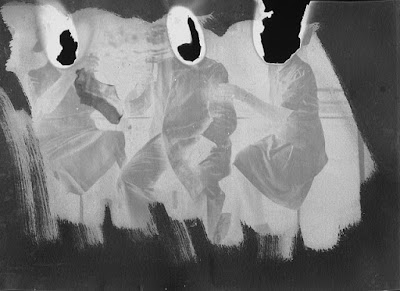 The six tracks on Amorosa Sensitiva are the stuff of beautiful daydreams if they had a electronic soundtrack. Placing the level of interest at a much higher level than most instrumental music will reach; there is a structured artfulness in the composition of these often spooky, sometimes disorientating sonic experiments that is captivating.

Opener ‘Headspincrawl’ is a woozy, string drenched ten minutes-something of dreamscape vulnerability and veers between filmic bliss and psycho killer intensity in often sudden movements and is a perfect match to its title. Almost like a story, ‘When face was face’ continues the emotive, string and synth lead narrative with a six minute meditation on seemingly anything that is worrying the listener. Filmic as well as completely absorbing in its mournful string setting there is clear menace lingering in the background that never quite makes itself known.

‘Waltz in clay’ carries on the mournful dialogue of the music, adding pensive strokes of piano and other delicate keys and could soundtrack your greyest day  with the happiest of ease. As emotionally draining as the first three tracks of the album are there is a clear sense of peace amongst the sonic trouble of the album’s sombre musical narrative. But flip to Side B and the excitement really kicks in as ‘Whirlbrainpoolin’ goes straight into the dark zone with heavy bass, doom laden beats and perfectly mismatched horns.

It’s as if you’ve woken up from a peaceful dream to find yourself in dungeon surrounded by darkness and it’s completely okay. The tension is there as the unconventional arrangements land the composition a modern jazz like quality, as sound collide almost randomly in a ritualistic dance of colour. The closing minutes of the track add blasting techno drums to the mix and the result is one astounding piece of sound art that truly delivers.

The closing chapters ‘Bum finger notes’ and ‘Darnskullgreyness’ slow down considerably  in pace but keep the atmosphere of gloom perfectly there as pulsating guitar riffs and muted voices increase the dreamscape like qualities of this work. If the music is this beautiful then the limited edition vinyl release of the album is going to be something truly special.