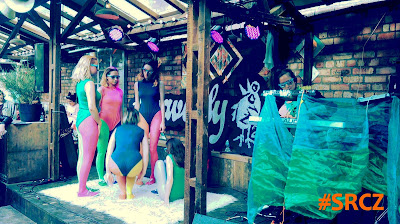 If there was avenue in Liverpool as befitting of the mantle of the venue for Heavenly Records birthday party then the DIY grown, nationally known The Kazimier is it. On a Sunday of decidedly intemperate weather we made our way down to the much loved Kaz Garden, as those in the know refer to it as. As we entered; (fashionably late or on time? It’s hard to tell on Sunday’s!) We saw the a small crowd beginning to form as Duke Garwood was setting up on the perfectly DIY stage. 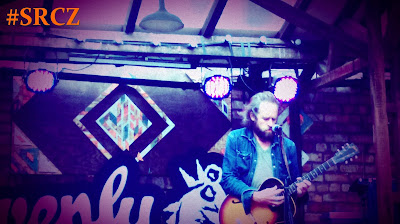 With a voice that we’ve grown to love, Garwood starts his set with little fanfare. So much so that a brief dash for some food in the upper seating area almost distracts us from it! But soon enough we’re on the ground and watching the man himself work through a set that is performed so relaxedly it’s perfect. The set rarely hits a fast pace, lingering menacingly in the atmosphere like a hot desert themed daydream. When it starts to rain few are deterred from their spot, few even flinch. These are true music fans here! Even an offer from Garwood to the assembled crowd to join him under the awning of the stage is taken up by few. By this point it was real rain falling down rather than drops and it made for a perfect accompaniment to Garwood’s wonderfully atmospheric music, part moody desert road soundtrack and part wandering Blue’s Man on a journey of the soul. 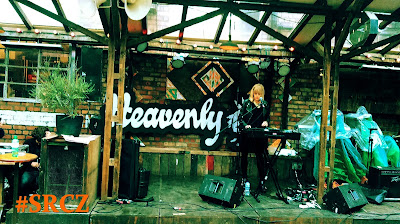 After an interlude in which the rain deterred no-one from their spot still, it was the turn of Gwenno to grace the stage. With a new album due soon in the form of the fascinatingly brilliant sci-fi concept piece Y Dydd Olaf (The Last Day) the artist was perhaps anticipated by a few in the audience. Certainly, we were and were not disappointed. With just herself and her Korg she gave a set that oozed kraut pop cool as the quite chatty Welsh artist illuminated the accompanying precipitation with some excellent music. Highlights included the smile inducing intro she gave herself “Hello I’m Gwenn0. This song is about Patriarchy.” And indeed, it was if you understood Welsh but for those who didn’t there were the supremely cool melodies to enjoy if you weren’t conversant in the language. As a whole a very enjoyable set. 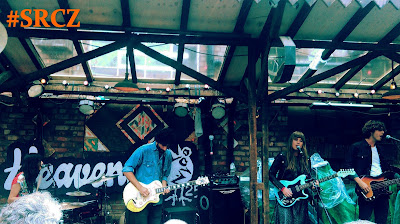 Kid Wave followed after with a typically charged but by nature more dynamic set as the quartet took to the stage not by the stealth of Duke Garwood or Gwenno but rather more noticeably. Their sound was instantly more angular and if there had been a roof on this particular part of the venue it would have sounded somewhat off. But given an open sky to work with the set was a good one, the band clearly enjoying it.  One of the best moments came during the soundcheck when the drummer sang a rather rousing verse of Simply The Best! 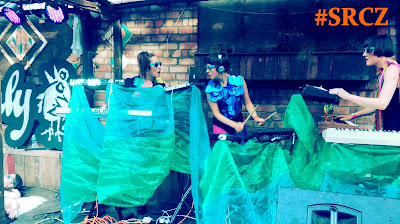 Concluding the activities in the Garden was the much anticipated premier of what would turn out to be a rather excellent piece by Stealing Sheep entitled Legs. Those familiar with the band’s last album, Not Real, will know that legs are a key part of the artwork for the release and here they do something on that theme. The twenty minute long (it might have been shorter but it certainly felt like twenty minutes) Legs was a brilliantly conceived curve ball that worked well. Most people were expecting to hear some songs from the album perhaps? Well, not this time! An industrial, almost kraut inspired instrumental was performed by the band, sipping smirkily on fruit cocktails and wordless throughout as a troop of dancers dressed in multicolour evocations of the album’s colour scheme performed a dance routine that was simple but effective.

Legs was indeed a triumph of a curve ball and as the band walked off stage, cocktails in hand and grinning cheekily it was the sign of a job well done. Special mention should go to the excellent Kazimier and the Heavenly DJ who kept the vibes flowing with some inspired label based sounds we’ll surely be in possession of soon.