There are some album don’t seek your attention as actively hide in the open waiting to be pounced upon by unsuspecting music fans. If there was any record that could match the latter description recently in our acquaintance then it’s Hermits On Holiday by DRINKS. Seriously, it’s all the better for it. 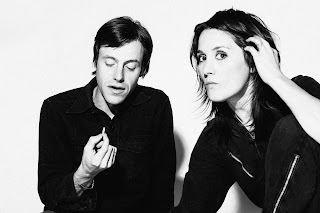 A ‘solo album’ made between Cate Le Bon and Tim Presley, the album is so knowingly discreet it’s brilliant. The songs are all angular, almost secretive blends of alt-rock and quirkcore. This is the kind of record you would discover in your local record store and be very proud yet at the same time a bit curious as to how it all happened. Single Hermits On Holiday (also the title track) was the first indication of the direction this project would take and with the contradiction in terms of a title it instantly captures the listeners attention with the off kilter rhythms and unforgettable chorus really kicking in second listen round.
But one song an album does not make and beside the title track there is much to get your mind around. The album is according to the band a solo album rather than a collaboration project and the sound reflects the ethos of hermits on holiday. The production is clear and works perfectly to make the listener wonder just what is going on. Listen to Spilt The Beans with its repetitive call of ‘windows in my house…’ and rough edged jamming that sounds less like a conventionally structured song and more like something, well, hermit like. The best music is made when hiding away with key collaborators and that theory remains here.

Take also the joyful question mark that is Tim, Do I Like That Dog, an almost seven minute musing of guitar chords and marching band drums interspersed with the  internal monologue of the title asked over and over by Le Bon. It shouldn’t work but this song is one of the highpoints of the album for sure. The shortest track on the album, Cheerio, holds a certain mystery made all the more cooler by the toy piano like melody lines it contains.

As whole then Hermits On Holiday  is a perfect holiday listen for working, walking and thinking holidays and with a sound that is edgy yet utterly charming to the ear we know you’re going to love this record.