“A little whole ago, a long way from here, I was looking for a book shop…’

The Meditation Begins. With Series Nine of Doctor Who one of the most anticipated for a while we’ve been treated to this prequel to series opener The Magician’s Apprentice. With darkness and misery seemingly portended, the Doctor is seeking better tasting water to aid in his meditation and over the course of many days he attempts to begin the aforementioned meditation. 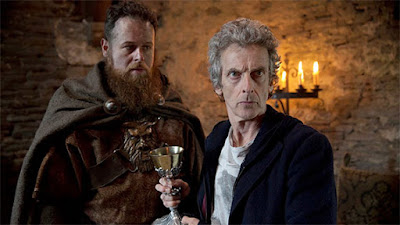 “I do not believe you’re capable of silence” is one comment made to The Doctor over his ability to commence a meditation and just as this viewer is certain of the fact it is fairly unlikely that such an energetic character as Peter Capldi’s Doctor can actually keep still for more than two second so it transpires that there is no meditation. Instead a story begins and wipes away the serene moments at the beginning of this minisode when we see The Doctor, eyes closed and silent, sat by a warm fire.

Most tellingly, three hours of time seems like days to this “attention deficit” enabled Doctor. There is humour, such as the suggestion that the much thought out well needs a visitors centre and The Doctor’s lovingly made statement to his companion Bors: ‘I thought you were and idiot!’  Bors agrees and it’s a warm moment indeed. This six minutes of Doctor Who is, like much of series 8, a slow burning piece and the story is only just beginning. A quest for a bookshop which lead to a battlefield is suggested and it might be the last one The Doctor sees…


Minisodes can be hit and miss, occasionally seeming like footage that didn’t quite make the cut but The Doctor's Meditation befits it’s function of setting up the story and intriguing the audience simultaneously.

Next: The Magicians Apprentice