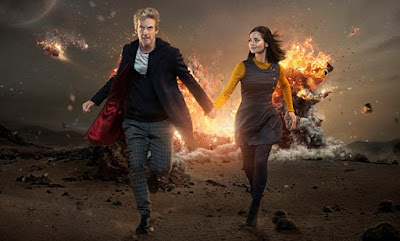 
The Story: As every single plane above the Earth is mysteriously frozen in the skies, Clara can’t find the Doctor. In all of space and time, where could he be? Meanwhile, a deed from the Doctor’s past comes back to haunt him in the most devastating of ways.


Here at SRCZmagazine Towers, we like to take a firm “No spoilers” stance when it comes to our favourite telly. And episode 1 of Peter Capaldi’s second series of Doctor Who is definitely one where this stance has paid off in bucket loads.  There have been whispers in the dark corners of the interweb and even the BBC’s own Doctor Who site has given away (in our humble opinion) a bit too much. But here we are, watching with an un-spoilered view. And what a watch it was!


If you’re a hardcore fan of the show, then the first five minutes alone will have had you squealing. In a battle on an unknown planet, the Doctor tries to save a young boy from a field of hand mines - a particularly nightmarish invention from the wicked mind of writer Steven Moffat. Turns out that the boy is Davros, the creator of the Doctor’s squarkiest enemy, the Daleks!


Fast forward and a horrifying creature called Colony Sarff is searching for the Doctor. He pays menacing visits to the Maldovarium (the Doctor Who equivalent of the Cantina Bar in Star Wars) and the Shadow Proclamation (the ‘Police’ of the Universe who have appeared with the tenth and eleventh Doctors), and the Sisterhood of Karn (last seen in The Night of theDoctor) demanding to know the Doctor’s whereabouts.


Turns out the Doctor has been hiding out and having a last beenio in a castle in 12th century Essex. Making the grandest of entrances and telling the crappest of jokes several hundred years before they’ll be remotely funny, Capaldi looks like a man let loose on the role he’s always dreamed of playing. His hair and clothes are a little wilder and punkier; any caution around his ability to take on the role from a much younger man well and truly banished.


Meanwhile, Clara (Jenna Coleman) and Missy (Michelle Gomez) have had to form the most unlikely of alliances to find the Doctor. In the last series, Clara increasingly took on the role of the Doctor and here she goes from teaching English at Coal Hill School to solving the problem of where the Doctor is and the mystery of the frozen planes in the sky with head spinning quickness.


While Clara is being very quick and clever, Missy is all capriciousness and murderous malevolence. But she’s also someone who needs her friend. Michelle Gomez is nothing short of magnificent as she twirls, sneers and manipulates.


And back to the biggest spoiler of the episode: the return of Davros. The evil creator of the Daleks was last seen raging at the Doctor in 2008 in the tenth Doctor story, Journey’s End, his fate unknown. And now we discover that he has returned to Skaro to die. But Davros is definitely not going quietly. He has Clara and Missy killed and destroys the TARDIS to teach the Doctor the devastation his previous compassion has caused. Julian Bleach makes the most welcome of returns and his Davros is unrelentingly malignant even as he faces the end of his life.


There are echoes all around of Tom Baker classic Genesis of the Daleks, where the Doctor was unable to kill Davros, questioning whether he had the right. Have the years between changed the Doctor? Is he now capable of killing a child in order to achieve a greater good? The Magician’s Apprentice (a very welcome return to Doctor Who two-parters) ends with the Doctor pointing a Dalek killing device at the young Davros on the marshes of Skaro.


We know that Capaldi’s Doctor is unpredictable, but could the man who has chosen the name of a healer really kill a frightened child in order to change time and save his friends? That remains to be seen in episode 2, The Witch's Familiar. What we do know is that The Magician’s Apprentice is a brilliant and superbly confident return for everyone’s favourite Saturday night family television show.


Shocker of the Week: “Davros. My name is Davros”


Best Compliment: Davros “I approve of your new face, Doctor. So much more like mine.”


Best Line: Missy puts Clara in her place “See that couple over there? You’re the puppy.”


Music and Doctor Who: The song playing in the Maldovarium is SRCZmagazine favorite Nick Cave’s ‘The Weeping Song’ . See the video below: