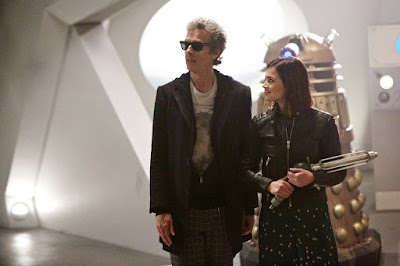 So, did you really think both Clara and Missy were dead? It would make for a very brief series nine wouldn’t it? We know from the not so subtly worded press release from the BBC that Jenna Coleman will be leaving this season but we know not as to how this will happen exactly.

When we open with the rather splendid pre-credits sequence featuring an unusual flashback sequence from no particular era recounted to a tied up and upside down Clara by Missy we know something special is happening. Indeed, the development of Missy is one of the highlights of this episode, His/her sense of grim humour and deliciously insane acts is laugh out loud funny when you know it shouldn’t be. (See the moment she shoves Clara down a hole with a glib ’20 feet. It’s 20 feet deep.’) The pointed stick is also a smile inducing moment. (‘Get your own pointed stick!’)

But whist Clara is being wound up in directions we’re not entirely sure of by Missy there’s an interesting things going between the Doctor and Davros. With a huge chunk of the episode devoted to an occasionally touching but ultimately traitorous two hander between them it needs actors that rise up to the challenge. In Peter Capaldi and Julian Bleach the challenge is met admirably. In the heart of the viewer is the suspicion that both are bluffing and ultimately it’s true but what happens between that is an effective rewriting of 1975’s Tom Baker story Genesis of the Daleks in reverse.

Place the two strands of the story together and you have 50 minutes of drama that changes the way we see the characters and adds twists subtle enough to be big players in the future arc of this series. What is this Dalek-Time Lord hybrid discussed? Will it appear later this series? Was Davros really dying? What effect will The Doctor’s loss of regeneration energy to the emotional trap set up by Davros? Missy has (or had) a daughter?! So many questions and so much time left this series to answer them. (Or not, as has happened on many occasions!)

So when one of the best two-parters in recent years finishes what are we left with? Certainly, there is a renewed confidence in the show after the excellent but often slow paced episodes of series 8 and a sense that this should really have been Capaldi’s introduction to the show. Watch the omnibus edition and it’s clear!

Best Line: On this occasion there are far too many to choose from but most of what Missy says is quote worthy. As an example though, ‘Tell him the bitch is back!’ is a notable first time use of mild profanity in the main series. (Torchwood is a different matter though, as you may be aware.)

Music and Doctor Who: Christmas is approaching so, since we may have no further excuses to unearth this extremely cheesy classic, check out The Go-Go’s ‘I’m Gonna Spend My Christmas With a Dalek.’ Seriously, it’s better than plum pudding…

Coming Next: Under The Lake