If the original release of Vulnicura wasn’t heartbreaking enough then this companion volume of acoustic versions of the tracks, resequenced and recomposed using alternative takes of the string sessions is even more so. But as much as that sometimes felt like an intrusion into someone’s private emotions, Strings feels much more intimate yet much more accessible. 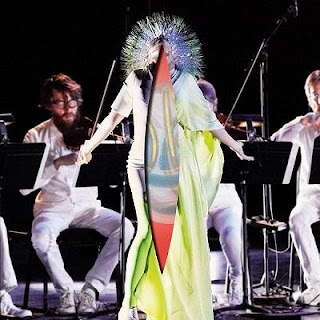 The first thing that strikes the listener is that stripped of the electronic elements that made the originals sometimes overwrought they shine brighter in this light. The beauty of the more intimate mix of just strings and voice is testament just how much instrumentation Björk actually works with. If you’ve ever caught any of her live work you will know she has an impressive live voice and when you strip away the layers of instrumentation and production effects that voice still stands up for itself.

It’s most evident on the songs that were more soaked in additional elements such as Stonemilker, which is just as emotional stripped down as it is in full production. As lines such as the quite remarkable ‘show me emotional respect/ I have emotional needs’, (Themselves extremely raw expressions of an emotional state we never really want to face up to) go by the acoustic mix makes this almost like a torch song in the vein of Piaf.

In fact, Vulnicura is an album that is rather like being in someone’s emotional breakdown and learning rather a lot from the experience. The stripped down versions here bring greater clarity to the raw and uncomfortable (but still undeniably beautiful) listening therapy that the original album. The ten minute epic Black Lake takes on a new life in strings form, making it in many ways an easier listen than the original with the simplicity of the string arrangements and vocals making it so much more than just a song.

Perhaps most telling of this more emotional period of the artist’s catalog is the cover art, with an oval slit cut, almost scar like, into the casing of the physical edition. This new iteration of the album is laying down the cards of an emotional detachment on the table for all to hear and whilst it should be an uncomfortable experience and undeniably is in many ways, this makes the music so much more than just music. Of the two editions of Vulnicura, Strings perhaps comes off as the most authentic. The original is cocooned in intimate production touches and works well but on Strings we get a chance to take in the words more clearly and really get down to the heart of the matter.