SRCZ Magazine // Why We Love! Sherlock

Sherlock Holmes, in recent times, has been re-adapted, re-envisaged, re-imagined or as Hollywood loves to call it - rebooted (just like Dracula , Frankenstein, Batman, Superman, Spider-man, Doctor Who, Hulk etc ); but this is not a modern phenomenon. Holmes and Watson have been adapted into many forms and formats, dipped in a wide variety of genres for adulation and ridicule, in equal measure, literally, thousands of times. (He is considered to be the most portrayed fictional character of all time with only Dracula giving him, a run for his money.) 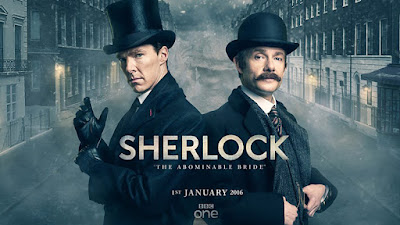 From the stage version in 1899, written by starring William Gillette (who actually brought the deerstalker and pipe iconography more into the mythos by using it based on the original Paget illustrations in 1,300 performances in thirty years!), to the Hammer Horror version with Peter Cushing through the various parodies and spoofs with the best, in my opinion, being ‘They Might Be Giants’ about a delusional millionaire in seventies New York who believes himself to the Great Detective and he see’s EVERYTHING around him as a clue, he is then appointed a psychiatrist called... Dr Watson.

The reason Holmes and Watson’s adventures are repeated on and on Ad infinitum is because they are recognisable archetypes: the genius and his loyal side kick. They’re interesting and exciting to follow - and like Superman, Dracula, Dickens and Shakespeare etc. you can twist them, bend them, smash and break them, continuously  coming up with new fresh and inventive ways to approach the characters and their tales, and ALWAYS they will remain recognisable and stay true to the purity of the concept. Invention and creativity are healthy for these characters as they stay fresh in an audience’s minds, so even though they are old they never go out of date.

The three recent reinventions of Holmes are as follows:

The 2009 Film and it’s 2011 sequel starring Robert Downey Jnr. and Jude Law. More comical than past interpretations and falling in to the recently coined movie term ‘Bromance’, this Holmes and Watson bicker and squabble like an old married couple. Holmes is depicted much more as anti-social, unkempt eccentric than usual.

Sherlock with Benedict... well we’ll be talking about that one in just a moment here.

Elementary, a recent American television version, with Johnny Lee Miller as Holmes and a female Dr Watson in the shape of Lucy Liu. Surprisingly popular in the States especially as it was originally panned before it even hit the screens as many thought it was just riding on the coat tails of the Downey Jnr. and Cumberbatch versions. It looks like you can never have too many Holmes...

And these three do not include all the ‘genius who can read people’ detective shows that are so outré in the USA, like: Monk, Perception, The Mentalist, Psych, Lie to Me and, of course, House who is a direct adaptation of Holmes (this has been explicitly stated by his creator David Shore ) as Holmes = House, Dr Watson = Dr Wilson, Holmes’ cocaine addiction= House’s painkiller addiction, the indifference to patients etc.

But we are here for our very own B.B.C. version and we are certainly spoilt. Without bias, I believe the Moffat-Gatiss version to be the best, based on the Hounds of the Baskerville, and here is a good example why...

Placing Sherlock Holmes in modern times is not a new idea - the Basil Rathbone starring (after two period adventures) ‘Sherlock Holmes and the Voice of Terror’ had the contemporary setting of the 1940's as did the rest of the series-  but it makes perfect sense as Holmes, like real life geniuses Newton, Tesla and Einstein, has always seemed a man ahead of his time or, even more so, ‘a man out of time’.

Like all of the ‘Sherlock’ series, this episode is neither a straight forward nor loyal adaptation, but a story that plays loose and fast with the source material, using it as an inspiration as well as paralleling aspects of Holmes lore, paraphrasing, teasing, twisting and, finally, refreshing a 126 year old icon.