For those who appreciate the understated, couldn’t give a fuck if you don’t care, eccentricity of Fiona Apple it’s one of the reasons her sparse but brilliant recorded output is timeless. Releasing just four albums since her debut in 1996, Fiona Apple has a talent for minimal output with maximum reach. Following the success of her debut album the challenge of the second album was posed. 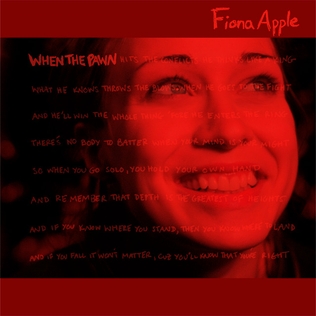 Seemingly taking the challenge in both fists Apple came back with an album with one of the longest titles ever for any album in anybody’s catalogue. When The Pawn, or to give it the full title: ‘When the Pawn Hits the Conflicts He Thinks like a King What He Knows Throws the Blows When He Goes to the Fight and He'll Win the Whole Thing 'fore He Enters the Ring There's No Body to Batter When Your Mind Is Your Might so When You Go Solo, You Hold Your Own Hand and Remember That Depth Is the Greatest of Heights and If You Know Where You Stand, Then You Know Where to Land and If You Fall It Won't Matter, Cuz You'll Know That You're Right’ was released in 1999 it was to almost universal praise, if not a few dismissive reviews from some publications.

But listening to the album again, just over 15 years after its initial release proves a few points about well made music. When The Pawn is certainly not compromised by the time passed since 1999. Certainly, it makes for a strong listen and with the highly pointed, and very literate, lyrics that point towards a sense of searching for belonging but not wanting to belong anywhere or commit too much to anything we find an artist who is keen to evolve both personally and creatively.

Some have criticised Apple in terms of her performance style and perhaps that is because her style is essentially honest. There is very little of her music that is staged or ingenuine and one never doubts the sincerity or truth behind the words she’s singing. One might even cite the bitter genius of Edith Piaf or other similar performers as a precursor. Of course, there is much to enjoy about the lyrical phrasing of the songs here, such as the supremely addictive anti love song Paper Bag, tinged with the jazz fusion influences that inform much of Apple’s music, ‘Limp’ also bubbles with an understated tension, the gentle piano notes of the intro belying the stream of consciousness influenced lyrics.

As a whole though When The Pawn is a rare beast of an album that hits top marks on all fronts precisely because it’s not concerned with being of any time or place and more a psychological portrait of the artist. Certainly, if everyone could express their neuroses and inner issues with such a turn of phrase, beautiful yet straight to the point simultaneously we would be a better race indeed.