There are certain albums that define a moment and others that begin a moment. When Patti Smith released Horses in 1975 it was a moment that began a career filled with music that is unconventional and poetic and much more besides. 40 years after its initial release the album is still a firm favourite and inspiration for many and still makes it onto various lists of most notable albums. 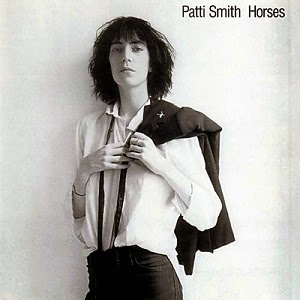 But to begin the second season of our Album Flashback features we thought we’d start with Horses, an album that we first encountered via the soundtrack of a television show called Millennium, (still one of our favourite drama’s many years later). The nine minute epic Land was used in its entirety to soundtrack a scene of one of the main characters descending into an apocalyptic madness and it was possibly one of the most beautiful moments of the show as a whole.

This madness is reflected in the songs poetic constructs and sonic concepts and still acts as an influence decades later. (Hole recorded a ‘follow up’ track to Land for their very early sessions that wasn’t as effective but you can certainly hear the influence of Patti Smith on their first album Pretty On The Inside, covered in season one of Album Flashback) But look elsewhere on the album beyond the revelatory Land, and there is much more of a cultural landscape to get lost in.

That landscape begins with the utterance of the very first words on the album. ‘Jesus died for somebody’s sins but not mine…’ before launching into the call and response chorus blessed version of Gloria that still graces a live set from Smith even now such is its potency. That first track is always key, and the way that Smith utters those famous lines, from the rebellious, snarl-like utterance of ‘people say beware, but I don’t care’ to the moment of revelation when ‘and her name is…’ begins the call and response winding down of the song.

Another undeniable moment of brilliance is the other nine minute performance poetry piece, (that simultaneously predicted the alien conspiracy movement), that is Birdland. In this song a boy discovers the father he thought was dead is in fact alive and well and flying a UFO. It’s a conceit that works well considering how ridiculous it probably sounded initially and the stark arrangement sets the words from Smith into a different place, with less need to consider them on first listen but to merely enjoy the journey and the associated emotions just as the subject of the song does.

But perhaps most iconic part of the album is not the music, (which is not to say it isn’t important, merely to say music is not the only thing on an album.), but the much respected album sleeve shot by Robert Mapplethorpe. The simple shot of Smith, jacket slung over her shoulder so casually as to seemingly not care, facial expression barely registering any emotion besides presence of the camera is somehow a perfect encapsulation of the art represented within Horses.

Put the audio and the visual together, tie it up with The Velvet Underground’s John Cale on production duties and Horses is truly an album that must be experienced.