These were the noises that kept this writer awake, and 20 years later Version 2.0 is still doing exactly that. If Garbage’s debut album was a Gothic, oddly erotic step into the dark then Version 2.0 is a full on proposition. That isn’t meant disrespectfully, it really is an in your face record that has barely, if at all, aged. When I first listened to this album the first thing that struck me was just how quietly aggressive it was, both in terms of production & arrangements and in writing. It creeps up on you and makes you love it rather than anything else. 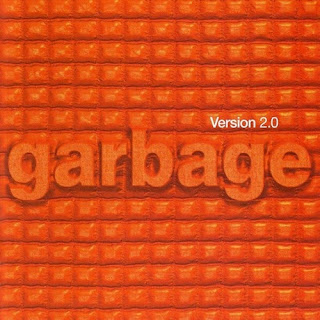 Re-released recently with a bonus disc of the remarkably good b-sides, including the always delicious Lick the Pavement, the record is as modern and forward thinking as it was on original release. This shows most in the music videos that accompanied the five singles released from the album. Now, two decades later and most mainstream albums are lucky to get two singles with a properly thought out video but it’s a positive thing to find that the band’s output is as relevant and listenable now.

It’s often argued that the 1990’s produced some of the best chart music of recent times and conversely, it’s often true. (It could almost be argued that the later excesses of the decade also produced some of the most easily tossed aside music as well.) Whilst their debut album was a solid slab of dark, shadowy grunge, it’s follow up is more self-assured and deliberate in it’s melodic assertions. Yet, in the mix is a dark emotional strain that adds just a shade of light into the canvas whilst retaining the endearing weirdness of the debut album.

It’s noted, subtly or not so subtly, in every video that Garbage is a band, in much the same way that Blondie did in the beginnings of their career, and this is almost odd in these days when so many artists are promoted almost for their gender alone, (which of course is an industry wide issue and should be addressed), but also curious is how you find you never even questioned it and thought of the band as the band. Is this worth pointing out? I think it definitely is for one simple reason. The power of music is knocking down stereotypes. Shirley Manson is an outspoken person and always has been before it became fashionable and we never ever question her rock n roll credentials. So why should we question anybody else's? This is how it should be.

Watch the imagery of the videos for Push It and I Think I’m Paranoid and they are utterly iconic. The surrealist distopia of Push It, with it’s light bulb men and creepy children riding adults like horses is still mesmerizing now, as the multiple award nominations for industry awards it received at the time attest. Indeed, it would look great on a large screen with a hi-spec sound system. I Think I’m Paranoid also uses simple imagery effectively, the lips isolated particularly both reference and inspire. The aching power of Special even comes out in the video game graphics imagery that was cutting edge on original release and still looks good now.

As to the album itself, the twelve tracks still carry the same dark edge as two decades ago, and are so cohesive that the listen is easy. It’s almost an example of forward thinking creative processes, (almost, because we don't actually know what happened in the studio), and this is obvious in the production that has not aged in the slightest. To certain ears the signature grunge sound is there, perhaps not surprising if you know your music history,  but as music has developed and cycled, this darker edge has become increasingly mainstream. A sign of the times? It’s hard to say, but it’s there.

The B Sides, or V Sides here, are something to treasure, as are most of the non album tracks from this band. The vengeful 13xForever has been a favorite for a long time, it’s an aggressive track that is close to Push It in its sound and rivals any of the singles as a potential hit. It was songs like this that made the now almost non-existent CD Single worth the hunt, even when they came in sets of three. Then we get to Lick The Pavement, the propulsive industrial rhythm driving what is just a really good song and urging an unknown love to do just that!

So is Version 2.0 still a killer listen? In a word, fucking yes. Even released now, this would be a totally unique album and it is thus deserving of your ears. Arguably, it’s the band’s last full on killer album and although it’s a distant galaxy away, we’re really looking forward to the reissue of Beautiful Garbage.