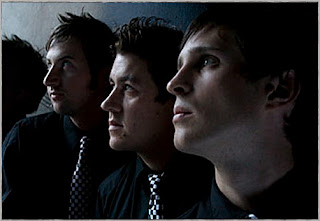 It’s hard not to be impressed when an album attempts to initiate a game of noughts and crosses with you. Sweetheart’s music doesn’t as much try to wrap you in mystery but keeps it’s straight with the band’s sound providing a sunny light in times of darkness.

The smooth production is perfectly matched to the direct nature of the music and lyrics and with songs such as single David Bowie is Dead? there’s much to love. Perhaps referencing the Twitter rumor that the once Thin White Duke was dead it joins a six track set of powerful rhythm heavy songs. There’s a directness to the sings that is pleasing such as London Girl’s “You’re just a stupid little London Girl” and most of Love Disaster’s “You’re just a bitch digging for gold/ You suck – I’m better off alone” and it’s a nice spike to the band’s sound that makes the music all the more affecting.

It’s not venomous or spiteful it’s hopeful and forward looking and doesn’t wallow too much in the misery of life. The albums stand outs are London Girl, its chorus invoking an invitation to dance all day until you feel alright over amped up guitar and Less Conversation that ups the stakes higher and create a powerful percussion heavy mix over which the bands strengths are played to perfectly.

If you enjoy straight ahead alternative rock then you’ll enjoy XOXOX immensely.