Swiss surrealist artist H.R Giger has passed away at the age of 74.

H.R Giger, most well known for his design work on film franchise Alien, has created a vast body of work. With a dark, gothic futurist style Giger’s work is, once seen, unforgettable. When I first saw his work as a child it instantly struck a chord and since then I have harboured the ambition to own a piece of his unique art. Such is the quality of his work, it rarely appears and if it does, is snapped up rather quickly. Very understandably.

The artists work is, by and large, rather horrific in its execution yet all the more fascinating for it. Art that is forged from darkness can be one note if not thought out properly, but the contexts of Giger’s work made them timeless. Mixing surrealist future fantasy with horror, dark eroticism and the occasional bit of social commentary his work has grown into the present rather than the reverse.

It’s easy to imagine pieces such as Landscape XXIX (Babies), depicting a section of an unseen larger group of bio-mechanical babies a very vivid silvery-grey tone as ugly to most people, and in all probability it still is, but just as recent art movements have sought to emphasise the beauty of the normal rather than the beauty of the traditional sense, Giger’s work in it’s very initial stages was showing us images of the grotesque using methods traditionally associated with more beautific art. 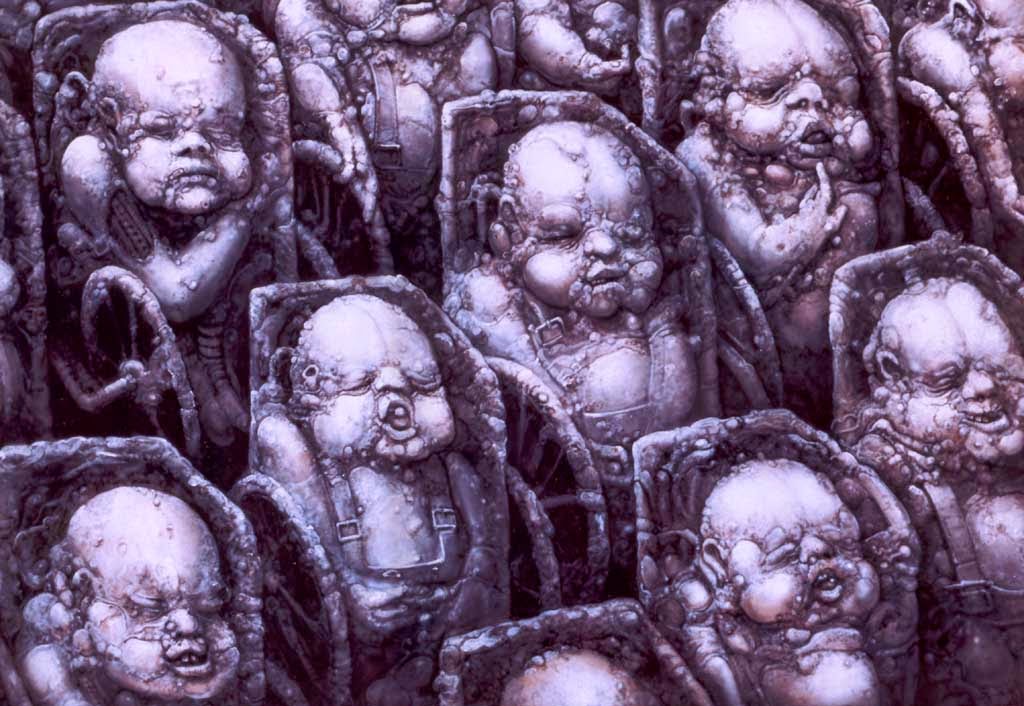 Taking the bio mechanical birth theme further, the iconic (and personal favourite of this writer) Birthmachine, from 1967, is fascinating. Foetal forms pass through the barrel of a gun, striking an eye opening metaphor of being ‘shot out into the world’ and reversing the intentional point of the gun and bullet in a brilliant piece of work.

But his most noted work though is surely that of the creatures in Alien. Arguably, Alien would not be the film it is now known and loved for without the genius creation Giger designed. Inspired by his own work found in the book Necronom IV, it earned him an Oscar in 1980.
With the passing of Giger, the world has lost a true original in the art world but his work, timeless and thought provoking as it is, will surely live on to inspire many more artists and occupy the walls of many more art collectors.