EXCLUSIVE INTERVIEW// IKIL ORIION - The Prince of Punk in Conversation.

The joys of being a journalist are manifold. On the one hand you get to hear lots of great music and learn about the scenes of many cities in the process, but on the other you also get to meet genuinely inspiring people whose creativity and passion for their work you can admire. One such person is IKIL ORIION. Hailing from the hotbed of creativity that is New Orleans he releases his album Paranoise Void on the 29th October as an exclusive digital UK release before other territories follow. He was recently in London to promote the record and on the evening before he departed I spoke to him about numerous topics... 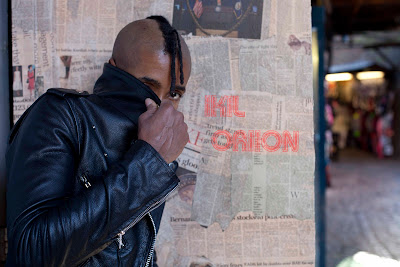 It was an average Sunday morning. The sun was for once shining (hence the name… IKIL ORIION brightest star in the galaxy) cracking the proverbial flags that weren't already cracked from lack of council funds but it was a good day. When I received an e-mail from the new Prince of Punk IKIL ORIION marked URGENT I was intrigued. What could this be I wondered and upon opening it was an appreciation for our review and an invitation for interview before he left London. Needless to say, I was intrigued to talk to the new Prince of Punk and it was later that day the interview occurred...

It was a crackly line with occasional feedback but Ikil’s vibrant New Orleans accent shone through like a beacon.  I opened with the question of London. It’s a big place – is this the first time he’s visited? “It’s my first time in London.” He confirms then continues.  “I’m originally from America, from New Orleans and I also spent a lot of time in New York City and by way of travelling internationally I’ve toured a lot in Europe. I’ve spent some time in Japan as well. Currently I’m based in L.A. So, yeah, it’s my first time in London – it definitely won’t be my last!”

He continued: “There’s always been really good feedback and response in terms of all the other projects I’ve been working on (from London). In terms of the music I’m creating there’s always a really good, warm affection, response from the media – radio, media people based in London and also the UK in general (so) I’ve decided to release the extra UK tracks and launch my album campaign `Paranoise Void` in the UK as the primary territory and branch it out to other territories internationally afterwards. It’s been a great experience with lots of inroads in terms of this project and my follow up record that pretty much is in the works as well…” 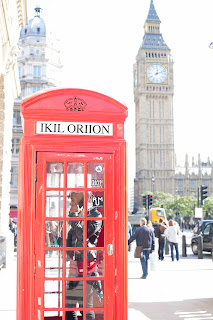 London is a good place to start promoting an album as diverse as Paranoise Void then, but what has impressed Ikil the most about the city? “(Having) Lived in New York I feel there’s lots of similarities to London in terms of way people move and shake. The energy is there in terms of the artistic community – you got that, the fashion designers, music producers etc and there’s a lot of good, popular things going on (and) they’re trying to create change with art in general. Art is overlooked to some degree or another. You got folks from politics or things going on but I think art is something that shouldn’t be taken lightly and I find in London from what I see when I’m out walkin’ and out on the streets people really value art in the UK.”

“Talking from the sound that I’m delivering on the record I’m trying to showcase the Rock connection to New Orleans. - Of course you got Jazz and Blues as well that people know New Orleans for! – Having a strong Blues component living in New Orleans and also access to the pre rock and rock sound that type of music (just) seems very familiar and it’s a very warming place. But in a nutshell it reminds of a combination of Tokyo and New York, two places I’ve spent a lot of time in. I feel really at home and (in London), you know, I feel like the energy is something I look forward to taking full advantage of in the future and spending more time here.”

If you check out Ikil’s profile on that vast sea of videos that is You Tube you’ll find two videos that are rather cool. Shot during his time in Tokyo, the videos for “You Talk Too Much” and “Zombie Walk” are imbued with the excellence of the music and also the energy of the world’s biggest economy. I inquire if the time spent in the city affected the music he made: “Ironically, when I was in Japan I toured all over, most of the guys in my band in Japan are from America. I covered a lot of ground in Japan like Osaka, Tokyo, the historical regions like Kyoto and the Kansai area.

He continues: “Just being in Tokyo, coming from America was an eye opening experience. With the language, of course, and the people have a certain way that they do things. A certain type of protocol and if you’re not from Japan it’s a little bit challenging to navigate in terms of knowing how to manoeuvre, but the difference I think between London and Tokyo is that I find, like the UK tends to be more open minded in terms of embracing things from a first chance perspective. I found in Japan that it takes a couple of times for them to really open themselves up to something new – fashion, music, art and a lot of that I think is down to Japan tending to follow a lot of trends from America or the UK.” 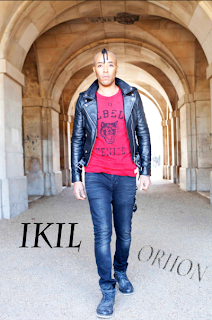 One of the key features of Ikil’s Facebook profile is a mock up of a newspaper headline announcing the “the attack of Nouveau Punk!” it’s an enjoyable feature of the page and so I asked Ikil about its inception. “My thing is when I first started getting into rock music or music in general I saw it as something more than just entertainment. It had more of a lifestyle connection ,so I was conscious of wanting to establish a new movement called Raw Noir Nouveau Punk showcasing the emphasis and importance of music, art and fashion…. in its most raw primal state! We should not as a people take ART for granted and overlook authentic creativity.

He elaborates further: “I think music is still one of the primary art forms of expression that can create change and instil awareness if done from the heart & executed properly”. “I’m from that Basquiat & Andy Warhol school of thought where music, art, fashion, photography can all co-exist as ONE. It’s like food and the air we breath…essential for life something we can live without”! 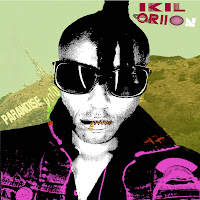 An album like Paranoise Void (pictured) is of course replete with cultural references and messages but is there a track that describes that encapsulates the ideals of the album perfectly? “This is a very personal record, but at the same time extremely Universal meaning people from all over the globe should be able to relate and identify with standout tracks like “Revolution”, “For Better `R` Worse” or songs that deal with relationships gone sour “You Talk Too Much” which delves into  broken promises made by people, so with that being said the album is “diverse/eclectic rock & roller coaster ride, full of energy and loaded with unexpected twists and turns”

“The album manifested itself from a period of my life when I was growing personally, emotionally, musically and spiritually. Zombie Walk encourages people to get out there and have fun – back to the dance floor. This one really captures where I was as a creative individual at that space and time. (The) Majority of the album was written while I was living in Brazil and travelling to and from Japan. The recording process was a true testimony of space & time ---- being open to what the Universe has to offer.”

The interview concludes with the question of what message people should take from the album. “By opening your heart and soul towards music and art …positive change can occur. This is probably one of the worst stages the music industry has been in that I can recall and I am hoping my record can re-ignite the fire that's been lost sometime from the
Global musical community”.

Fine words then from the new Prince of Punk, IKIL ORIION. His debut groundbreaking album Paranoise Void (UK BONUS VERSION) is out on the 29th October on Rebel Glitz
Records you can purchase a digital copy at IKIL`s exclusive artist site www.ikiloriionofficial.com  or visit any UK digital stores such as iTunes UK, etc.

Interview and text by Sebastian Gahan.
Photography shot in London by Yannick Lalardy.
With many thanks to IKIL ORIION.