Eyes On The Box//Doctor Who Series Seven, Episode Seven: The Bells of Saint John.

The story: There’s something in the wi-fi, sucking up human minds into a great virtual cloud, and The Doctor meets the mysterious Clara Oswald again. 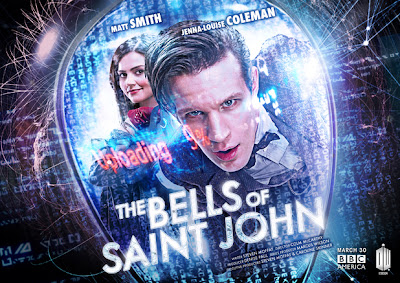 The Bells of Saint John kicks off the second half of series 7 of Doctor Who with a bouncy, jaunty adventure that sees The Doctor (Matt Smith) reuniting once again with the mysterious Clara Oswald (Jenna-Louise Coleman), a girl he’s inadvertently caused the death of twice previously.

Smith and new companion Coleman have a sparkling chemistry and we see The Doctor taking on an almost paternal role in guarding Clara from the mysterious organisation, headed by Miss Kislet (Celia Imrie) set on uploading human minds into a cloud based system on behalf of her client.

Although she’s a new companion, we’ve seen Clara appear previously in Asylum of the Daleks and 2012 Christmas special, The Snowmen. The Clara we see here is less...developed than the version of her we saw in Asylum of the Daleks, but here we see the genesis of Clara “Oswin” Oswald as Miss Kislet’s sidekick, Alexei, uploads increased computer knowledge into Clara’s mind. 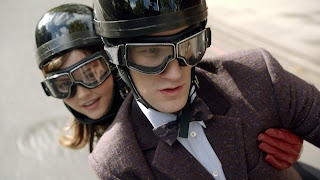 While the two leads provide the heart of the story, guest star Celia Imrie brings verve, sassiness and, at the end, a touching vulnerability to Miss Kislet. We’d love to see more of her, please BBC.  And talking of seeing top notch guest stars again, Richard E Grant puts in a surprise appearance as Miss Kislet’s client, The Great Intelligence, who was also last seen in The Snowmen. We definitely don’t think this is the last we’ll see of him, either.

The Bells of Saint John is confidently directed by the new-to-Doctor Who Colm McCarthy (Spooks, Ripper Street), who depicts a beautifully stylised London that’s drenched in sunshine. With Sherlock-esque on-screen graphics adding to the style of the show, McCarthy continues the modern Who way of taking a miniscule BBC budget and producing some high quality visuals that would shame some Hollywood blockbusters I could name. There’s a plane-about-to-crash scene and a Doctor riding his “anti-grav” motorcycle up The Shard moment that really do take your breath away.


This episode is a great jumping on point for any new fans and it’s written and played with wit, style and no small amount of cleverness. A bit like The Doctor and his new companion.

Nods to fans: The literal The Bells of Saint John joke, a fez, Angie’s book, Summer Falls by Amelia Williams, Jammie Dodgers, “Under my protection”, the TARDIS has a garage!