Eyes On The Box//Doctor Who Series 7, Episode 11: Journey to the Centre of the TARDIS

The story: The TARDIS is in danger, with Clara trapped inside and the Doctor has 30 minutes to save her. 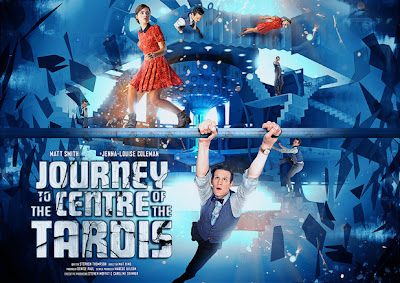 Doctor Who fans everywhere have waited eagerly for this TARDIS-centric episode, especially given that the last one was Neil Gaiman’s much loved The Doctor’s Wife. Some seriously big old boots to fill, then.  Meanwhile, Journey to the Centre of the TARDIS writer Steve Thompson’s  last Doctor Who episode was 2011s acceptable, if slightly underwhelming, The Curse of the Black Spot.

So how did Thompson’s episode fare? Well Journey to the Centre of the TARDIS starts out with a powered-down TARDIS being captured by a team of space salvagers, Gregor and  Bram van Baalen (Ashley Walters and Mark Oliver) and their “android” Tricky (Jahvel Hall) using a less than legal, and visually stunning magna grab.

With Clara trapped inside the TARDIS, the Doctor has to persuade the van Baalen brothers and Tricky to help him save her before the damaged TARDIS explodes. He ups the ante by deploying the TARDIS self-destruct button for 30 minutes. Clara, meanwhile, is being chased by some menacing creatures through the infinite spaces of the TARDIS.

This is not the first episode this season that gives more than a nod to the Alien franchise, as we see the Doctor and the salvage crew battle against time to find and rescue Clara while the creatures stalk them through the corridors of the TARDIS.

Director Mat King does a very credible job of bringing the TARDIS to life, with a beautifully realised and mind-boggling library, a glimpse of the often mentioned swimming pool and even what appears to be a highly dangerous cliff edge.  And he doesn’t skimp when the Doctor and Clara reach the heart of the TARDIS in mid-explosion. Whilst it may be high on CGI, it is well delivered and rather lovely to see.

The danger in this episode feels very real as we realise that there is a crack in time in the TARDIS and the future and the past are bleeding through. We hear the ghostly voices of Doctors and companions from the past, including snippets from An Unearthly Child, the first Doctor Who episode ever, and Rose, the first of the re-booted series. There is also genuine horror as the Doctor and Clara realise what the creatures haunting the TARDIS actually are.

I do have a couple of grumbles. The side story of the van Baalen brothers and “android” Tricky, who is the most human of them all, is satisfying, but feels a bit tacked-on.  And the ending, like a few in this series, feels slightly anti-climactic after the story it follows.  When Russell T Davies was the Doctor Who show runner, he was sometimes criticised for using the re-set button, and the literal Big Friendly Button used in this episode feels like a bit of a let-down. More so when we know that Clara knows the Doctor’s name after reading it in the book she finds in the library, The History of the Time War. Also, that she now knows about her other incarnations in the Doctor’s life.

Does this mean, then that she will now forget these things? The van Baalen brothers’ timeline is not completely re-set to where it was, with Gregor’s humanity asserting itself, and so could this mean that Clara’s is the same? It remains to be seen.

With only a couple of episodes to go until the series finale, The Name of the Doctor, there are some intriguing questions still to be answered.

So, back to the question of how Steve Thompson’s episode did. Well, it was a decent enough one, with some stunning visuals and fan-pleasing moments. But I doubt that history will see it as loved by fans as The Doctor’s Wife.

Best line: “What lies behind those doors is the salvage of a lifetime”

Did you know: This isn’t the first time that the Doctor has feigned a TARDIS self-destruct button. The last time was with a Jammie Dodger when facing the Daleks in Victory of the Daleks.

Meh: The Encyclopedia of Gallifrey is a set of bottles that release whispering voices? Oh, please.

Fan pleasing moments: The key with SMITH written on it, the library, The History of the Time War, Tom Baker and Ian Chesterton, “The assembled hordes of Genghis Khan couldn’t get through that door and believe me, they’ve tried”, the swimming pool!