Going to your favorite coffee shop is something that can't always be adequately described in words. Indeed, many may not even think to do so as they have other things on their mind. Last year’s Coffee Culture season featured a look at Liverpool's oft-said to be best independent coffee shop Bold Street Coffee and it has to be said that it is a place easily loved by the coffee connoisseur.

You’ll note that I said the feeling of an excellent independent venue is often hard to describe in words alone and to prove that fact we sent in a man of considerable talents to capture the essence of the venue in pictures. If you recall the impressive live action sketches from our coverage of Liverpool’s Threshold Festival earlier this year,  you will recall that their creator Mook Loxley has a talent for capturing the essence of a scene. Check out the sketches he produced over an unidentified beverage (coffee, at the least!) in Bold Street Coffee… 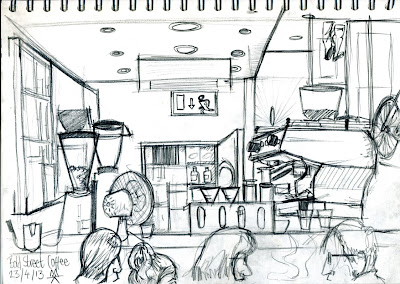 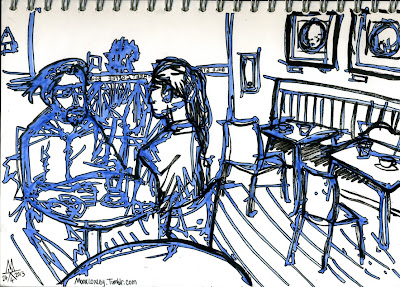 “…went to Bold St Coffee the other day and did a bit of sketching.  I love it in there, they're dead friendly and let you take your bike in so it doesn't get nicked by some scally-wag.  The staff noticed me doodling and asked me to draw one of their regulars as a present for their boss!  I also saw Alexi Sayle in there - hero!”