Eyes On The Box// Doctor Who Series 7, Episode 12: The Crimson Horror

The story: England 1893. Madame Vastra, Jenny and Strax head oop North to investigate some strange goings on in the Yorkshire town of Sweetville. 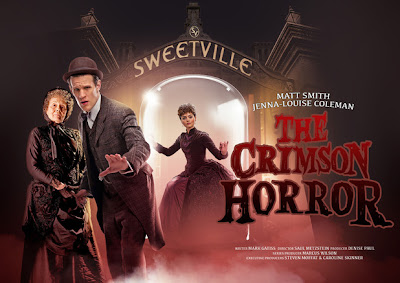 Oh, Mark Gatiss, I bloody love you! Long-time Doctor Who fan, Gatiss has already brought us the excellent Cold War in this latest series of Doctor Who and now he brings along this little gem.

The Crimson Horror is without the Doctor for the first 15 minutes as his sometime companions Madame Vastra, Jenny and Strax set out to investigate a spate of suspicious deaths in the seemingly idyllic Sweetville.

At the behest of Mr Thursday, whose brother Edmund has been found dead of what is known as Crimson Horror, Jenny, the only human of the Victorian crime-fighting trio, infiltrates the town of Sweetville and its factory to discover the source of the deaths.
Sweetville is run by the fire-and brimstone Mrs Gillyflower (Diana Rigg) and her silent partner, Mr Sweet, who claim to be founding a new Jerusalem in them there Yorkshire hills following Mrs Gillyflower’s prophesised “end of days”. Meanwhile, Mrs Gillyflower’s blind, disfigured daughter, Ada (Rigg’s real-life daughter, Rachael Stirling), secretly keeps a “dear monster” locked up in a prison cell for company.

When the Doctor finally puts in an appearance, it’s preceded by a truly jump-out-of-your-seat moment. Jenny, resplendent in a kick-ass Victorian cat suit and corset, fights her way through Mrs Gillyflower’s ‘pilgrims’ before going on the run through the factory, Doctor in tow, as they go in search of the missing Clara.

We’re spoiled rotten with guest star performances this week. The return of Vastra, Jenny and the wonderfully sulky Strax is an absolute delight. Strax threatening an uncooperative horse and a street urchin who talks like a satnav are just a couple of highlights. Diana Rigg brings oodles of dastardly, demented fun as Mrs Gillyflower, and Rachael Stirling is by turns heartbreaking and heart-warming as Ada.

The revelation of Mr Sweet is slightly reminiscent of Total Recall’s Kuato in terms of ickyness, and Ada’s splatting of him is a proper laugh out loud moment.

It’s worth noting the wonderful set design and direction in The Crimson Horror. From the vast space of the factory floor, filled with giant gramophone type devices, to the Victorian couples preserved in bell jars and the steam punk rocket, every scene is gloriously done. One particular treat is the grainy old film as the Doctor recounts how he and Clara ended up in Sweetville. It’s so well done it practically tears a crack in the fourth wall. The music by Murray Gold adds to the episode marvelously  from the sweet tune that underscores Clara awakening to the brilliant and rousing I Am The Doctor as this jolly adventure reaches its climax in Mrs Gillyflower’s factory.

All in all The Crimson Horror is a brilliant, camp-as-Christmas, terrifying, good old-fashioned romp, which even…unlike some episodes in this series…has a more than satisfying end to the story.

Which leads us on to real ending, with Clara back home at the start of the series, pictures of her on a laptop from recent (old) adventures and her young wards having guessed that her “boyfriend” is a time traveller. This, of course, is a set up to Neil Gaiman’s much anticipated Nightmare in Silver next week. Can Gaiman do for the cybermen what Gatiss did in Cold War for the Ice Warriors and make them menacing again? It’s going to be long week waiting.

Best line: “I’m the Doctor, your nuts and I’m going to stop you”
Best line (runner up): “I’m gonna go play with my grenades”
Best line (second runner up): “Oh great. Attack of the supermodels”

Shut that door!: The Doctor uttering The Generation Game host Larry Grayson’s “Look at the muck in ‘ere” catchphrase. Priceless.
Did you know: The Crimson Horror is the 100th episode since the show’s reincarnation in 2005.
Plea to the BBC: Please give Vastra, Jenny and Strax their own spin off show!
Fan pleasing moments: “I once spent a hell of a long time trying to get a gobby Australian to Heathrow airport”, “Brave heart, Clara”