For reasons beyond my reckoning, Psychedelia has always been a slightly odd fish for me. It likely has something to do with being from Liverpool, where 'psychedelia' has always been synonymous with 'The Beatles' and, by extension, 'success', and where the city seemingly spends half the year awash with Sergeant Pepper jackets and mop-top wigs. Also, I came of age in the decade after Britpop, when idolisation of the Swinging Sixties fell out of favour and was replaced by a modern, crack-den take on Byronic Romanticism. Whatever the reason, and despite the significant number of psych records I count among my favourites, I feel an oddly unavoidable sense of trepidation the first time I listen to any artist described as 'psych' – a kind of fear that I'll have heard it all before. 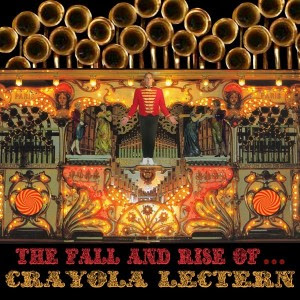 Crayola Lectern – the alter ego of Brighton session musician Chris Anderson (hereafter referred to as Lectern), ably assisted by Cardiacs guitarist Jon Poole and brass-man Alistair Strachan – comes very close to blowing it within forty seconds of his debut album's opening track, 'Ultrasonicmetaglide'. After a pleasant enough opening of tinkling piano and burbling synth that calls to mind a slightly more trippy Penguin Cafe Orchestra, there is a horrible moment when the track proper kicks in and it sounds, for just the briefest of moments, like we're listening to another rehash of John Lennon's 'Imagine'. Lectern's a bit savvier than that, though; no sooner has he set up that moment than he subverts it, sending us off on a whirling musical trip across some inner cosmos that sets the tone for the rest of the record.

A building pocket symphony of pianos, synths and cooing vocals melts into 'Goldfish Song', which starts off as a slightly silly lament about pets with existential crises and ends up sounding like the soundtrack to a waltz sequence on Button Moon. Comparisons between British psychedelia and children's TV shows may border on cliché, but the genre has always drawn heavily on nostalgia ever since Lennon & McCartney retreated to the suburban skies and childhood trees of their youth, and Lectern is no different – he draws on such themes of vanished youth as unbridled imagination and the belief in one's own invincibility in a way only a man of his middle-aged years could.

Approaching this album for the first time, it can feel slightly disappointing – three-minute pop songs are largely eschewed in favour of languid instrumentals that evoke Joe Hisaishi's work for Studio Ghibli (I know, I know, more children's films), and even when a track starts off as a song it often ends up as some kind of pop-symphonic overture, which can feel bit lazy and unfocused if you're expecting something akin to Sergeant Pepper's.

A second or third listen can prove very rewarding, however, especially if you aren't doing much else at the time. As a whole, it sounds like it could easily be the soundtrack to a lengthy sunset walk, or possibly an evening in the garden with a few friends and some horizon-expanding substances. That may not be quite what its creator intended - the ten-minute-long 'Trip In 'D'' in particular works far better as background music to a quiet evening typing than as the grand focal point of the album its place in the track listing suggests – but it's difficult to imagine him being too upset about it.

There are, though, a few tracks which stand out – foremost of which is the wondrously elegaic 'Slow Down', where Lectern chides someone who drives 'like you've got a rocket up your arse' in a charming baroque-pop confection that melts into another sumptuous pop overture. Listen a little closer, however, and lyrics about 'little children behind cars you pass' hints at a mute horror concealed in Lectern's watery warble. If they played this song over speed-awareness ads I don't think anyone would ever drive above 30mph ever again.

This album is unlikely to find itself on permanent repeat on anyone's record player – at over an hour in length, even one listening is quite a commitment, and this is not a record that lends itself to dipping into at random. It isn't, evidently, a record for everyone – but, for those who enjoy their psych slow, slightly spacey and tuneful without words, it's likely to be a richly rewarding listen.

'The Fall And Rise Of...' is out now on Bleeding Heart Recordings
www.crayolalectern.com
www.bleedingheartrecs.com