The Comix Column #2: Where Were We?

DISCLAIMER:  The below opinions are not facts but simply very one sided, biased views from a cynical and seen it all aging comics fan whose really trying to look on the bright sides of things. That the opinions expressed below happen to be true as well is merely coincidental. 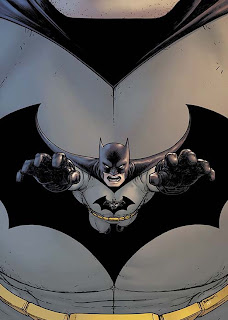 Hope you all had a bag stuffed and pocket filled Free Comics Day and got what you were looking for, got what you needed and your life was changed for the better. Or something like that. At the very least I hope you got some fun free comics that you liked reading, as that was kind of the point.

Before I start this column in earnest-next week for reviews of comics released that week and what’s upcoming that you should be looking out for- this week I’m going to look at those special comics that are, for my money, standing out from the crowd, raising their heads high,  and other such proverbial nonsensical mixed metaphors. I’ve been reading comics over thirty years now and it’s easy to get cynical and Alan Moore-like (sorry Alan we love ya but you’re a ‘Negative Nellie’ when it comes to comics) about your favourite hobby especially when it feels like a lot of ideas and concepts are unoriginal, plots are continuously rehashed and established characters are caught in certain story circles, never breaking out to dare to do something a little different.

Don’t get me wrong I love me a whole hunk of super hero (that came out a little wrong) – for god sakes I got ‘em tattooed on my body- but I need new creators coming in and rocking the joint and knocking my socks off with new stuff. And when it comes to comics, superheroes aren’t the only things being published. So without further ado here’s my top comics I’m loving at the moment and cannot get enough of:

SAGA (pictured): Quite simply one of the best, most sublime, beautifully illustrated and original comics to come along for what seems like an eternity. Not since the days of The Invisibles, Sandman, Preacher and Planetary has a new comic been so addictive. You will literally fall in love with the main protagonists – a kind of alien Romeo and Juliet- and hope to god they make it unharmed through each issue. 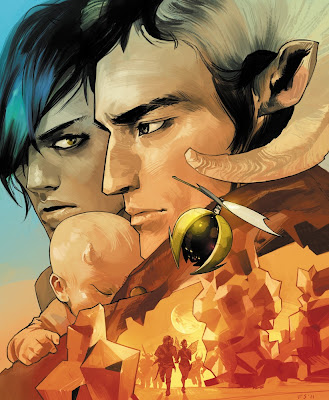 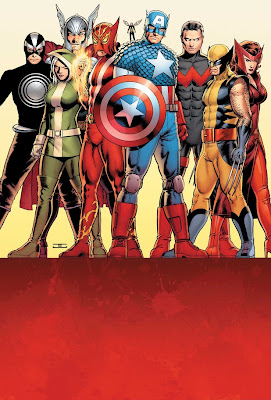 AVENGERS/ UNCANNY AVENGERS (pictured): Hickman’s on Avengers so what more do I have to say? He’s cleverly took the style and feel of the Marvel movies put it down on paper and injected it with his own wildly imaginative take on big sci-fi themes to create one of Marvel’s best books. But what has really surprised me is Rick Remender on Uncanny. In this book the X-men and Avengers are collaborating to try and bring an understanding to society about mutant/ human relations but obviously things don’t go quite as planned. Among the shock twists and action pieces there’s some lovely understated character development and the interaction between the group has the old seventies X-Men soap opera-like feel. AND he’s managed to make Cyclops brother Havok an interesting and important character.

MORRISON’S ACTION COMICS/ BATMAN INC: I've put these two titles together as the former has finished and the latter is a few issues till it the end. Both written by a certain Mr. Grant Morrison and features DC Comics’ two big icons: Superman and Batman in ways you’ve probably never seen before. For two characters that have been around for over 70 years, Morrison has amazingly found new, fresh perspectives on both of them that is at once exciting yet controversial and has divided fans.

If you want to see the same old, same old then stay well away but if you want to see Superman take on the Devil in 5 dimensions or Batman’s son ... well that would be telling. So when these titles are collected I suggest, nay DEMAND, you run out and grab copies and see –in my not so humble opinion- the two greatest superheroes created in stories that will actually raise your intelligence (seriously).

Okay that’s me done. Like I said as of next week I’ll be reviewing the week’s releases and trying to cut the wheat from the chaff; because there’s a hell of a lot of comics out there, how many of them can actually be any good? Well we’ll see; together; hand in hand; getting to know each other as we do. Agreed? I’ll also be trying to guess what’s worth you putting down your hard earned cash when it comes to new releases.

Which leads me to the question: if you could pick just one regularly published comic to suggest to others to pick up, what would it be?

Next week I’ll also be looking at those collected comics and graphic novels you simply have to own. Until then: ciao and happy reading.