DISCLAIMER: The below opinions are not facts but simply very one sided, biased views from an aged and cynical seen it all comics fan whose really trying to look on the bright side of things. That the opinions expressed below happen to be the truth is merely coincidental. 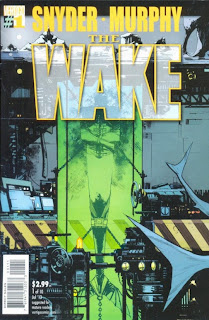 Another week and another rush of publications to make the sorest of eyes smile with early signs of crow’s feet. Or, depending on how you look at things, high hopes have been torn down and false promises have not been kept. But first the good stuff and then further down the column we’ll piss on comics’ proverbial parade of chaff. After last week’s Dream Thief I’m pleased to relay that another superb original debut hits the shelves. Scott Snyder is the new golden boy at DC and is writing up a storm, what with the fact he’s in charge of both their big guns (Batman in his own self titled book and Superman in the upcoming ‘Superman Unchained’) but this week sees his creator owned THE WAKE released.

With art by Sean Murphy- who wrote and illustrated his own Punk Rock Jesus (a comic far superior than its title would dictate)- this is certainly A+ material and  perfect for those looking for something away from capes and masks. The set up is simple: Lee Archer is a marine biologist who is sent to analyse a sound beneath the sea but all is not as it seems. This may not sound like much at all but Snyder/ Murphy know exactly what they’re doing, plying on the atmosphere thick, ramping up plot points and then hitting us with an out of left field story beat on the last page- definitely one to watch.

Last column I mentioned about how certain mainstream superhero franchises can get stuck in a creative rut especially when they sell themselves (and readers) short by involving too many titles in a story. Crossovers between comics have been the bread and butter of American comics for many years (as in wouldn’t it be great if character x met character y and so forth) but they have turned it from being about exciting story possibilities to obligatory storylines, that end up feeling patch work and contrived rather than ‘game changing’ or ‘world shattering.’

The two biggies (Marvel and DC) also have another over used trope up their ragged and frayed sleeve: death. If they want to bring media attention to a certain comic or make it seem to the reader that a story has ‘progressed’ and characters have been affected/ changed then lazy writers (pretend) to kill a character, oh, and the  more popular the character the better. Which brings me to this week’s JUSTICE LEAGUE OF AMERICA. The title, part of the Justice League franchise at DC, has a surprise, shock horror, WTF ending if that’s your kind of thing. Me? I like interesting stories and fully drawn characters.

Speaking of shocks, surprises and franchises (now that’s a transition, although it would have looked better if I hadn’t brought attention to it- damn) Marvel release another mutant comic simply titled X-MEN but with the surprising concept of it being an all female team (2013 and that’s supposedly an original idea?! Told you it was shocking). Written by Brian Wood (who wrote the popular DMZ) and drawn by Olivier Coipel the title really tries to be interesting giving the main protagonists dimension and not just being eye candy (although I’ve never understood why anyone would want to ogle a drawing) but is it not a case of JAX (just another X- book?); only time will tell depending on where the story goes. However it’s always great to see Storm’s early eighties Mohawk and remind myself of how long I’ve been reading comics- sheesh, am I really that old?!?

Two creators who are better known outside of comics have original material published this week. Horror director John ‘Halloween’ Carpenter (no, no, that’s not his middle name, he directed the original film, his mum and dad would have to be pretty f’ed up to call him that) has created with his wife, Sandy King, and actor Thomas Ian Griffiths JOHN CARPENTER’S ASYLUM. Veteran writer Bruce Jones actually writes the script so it does feel more of ‘a famous name placed above the title to get interest’ type of deal. The concept is pretty generic as well- Father Daniel Beckett fights demons in L.A. One for undiscerning horror fans me thinks. 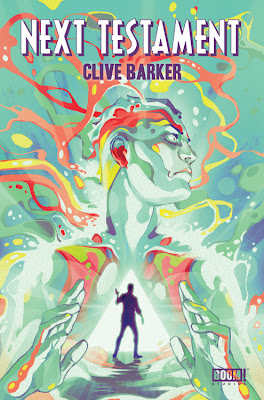 However the second gore maestro is Clive Barker. In THE NEXT TESTAMENT his imagination is certainly let loose, as is his co writer Mike Miller’s. They pose the question ‘what if the God from the Old Testament returned to earth,’ well, let’s just say all hell would break loose. This looks like a keeper and with a strong opening chapter and fantastic art by Haemi Jang, I suggest you pick this one up.

Last column I promised a rundown of excellent foreign language comics to read especially for the uninitiated and those looking for something away from the norm.

Okay, let’s get the obvious out of the way: TINTIN and ASTERIX. Both titles were my gateway into comic reading as I borrowed them from the library and soon finished them all quickly only to read through both series all over again. My appetite for this strange crossover art form was not satiated and that’s when I started to pick up American comics. If you don’t know where to start just start at the beginning of each series or you can pick up what’s arguably represents each character at their very best.

For Tintin many a fan would pick THE BLUE LOTUS because of its density and re-readability. And for Asterix it would be one of the earlier books such as ASTERIX AND CLEOPATRA which is laugh out loud funny on every page. Seriously if you’ve never read either series of books you don’t know what you’re  missing as both are the very definition of entertainment and the creators (Herge and Goscinny & Uderzo) are considered formative influences on so many of today’s creators.

AKIRA by Katsuhiro Otomo is considered another classic and is a great way to begin to explore Manga. Manga are Japanese comic strips in smaller sized paperback form and if you thought the American market was huge wait till you see what is waiting for you in this format. The genres are many and there is definitely a something for everyone feel about these titles; from the outrageous to the sublime and everything in between.

And then it’s to France we go as we are introduced to ADELE BLANC-SEC and her ‘Les Aventures Extraordinaires.’ Three translated books have been released by Fantagagraphics so far, with two stories in each and they are a neat subversion on the steam punk hero at once feeling unique yet comfortably European and seductive.

So what is in our immediate future this summer? Superman/ Batman by Greg Pak and Jae Lee looks superb, even if just based on Lee’s amazing art in the previews (and the Man of Steel and Dark Knight meet alternate versions of themselves and I’m a sucker for that whole silver age mentality and style), Superman Unchained could go either way but what I’m really looking forward to is The True Lives of the Fabulous Killjoys. I was suitably impressed by the comic day freebie and more so Gerard Way (formerly of My Chemical Romance) more than proved himself on his wonderful Umbrella Academy series. The Killjoys is based on/ an extension of MCR’s last album set in the future where a sinister corporation controls everything and music is our only saviour. And there will be sci-fi punks and who doesn’t like sci- fi punks?

Next week the usual, more of the same, etc, and so on, and so forth, ad infinitum, forevermore. Until then: ciao and happy reading.

The Comix Column in compiled by Martin Shepley.