There’s a street in central London that many musician readers will know for the fact that it’s so, well, musical. And that’s because it’s a street full of music shops and venues for music to be heard and performed. Denmark Street is the name of that place and there’s a rather cool bar called The Alley Cat where I saw a certain self-styled intergalactic star recently. 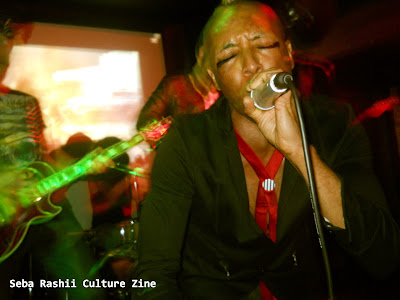 Ikil Oriion is a name that is well known among a certain set and judging by the memorable performance him and his Asteroidz gave on this otherwise quiet Tuesday evening that set can only grow wider. Arriving on stage with a bang he launched into a ten song set that flew by faster than it should have done and far too quickly for many.

With a razor sharp punk edge to the music and a noticeably physical manifestation of said energy he was in the crowds faces like nothing else, even trashing his own merch table at one point by jumping at it suddenly. (Of course, it was rectified soon after!) The set was powered by the bands powerful punk-rock backing to the truly powerful stage presence of the man himself. In your face has never been so descriptive as he stalked the tiny stage like a panther on the loose, regularly launching himself into the crowd with an aplomb rarely seen.

Highlights from the set included a rocked up version of our album fave Revolution with Ikil on full performer mode and excellently so. Rock Out also did exactly as its title suggested – and anyone suggesting otherwise needs to get down to see this man in action! The whole set was really one huge highlight, a never ending rock out that ended with a well chosen cover of a certain Mr Bowie’s I’m Afraid of Americans that was concluded with a message that we shouldn’t be afraid of Americans, because “contrary to popular belief, we come in peace!”

And there’s no reason to deny that when they come in the form of the new Prince of Punk, Ikil Oriion. Check this guy out when he comes to your town, as he surely will...