The black and white cover art of Cesare Runs Away speaks of long, drawn out nights in Andy Warhol’s Factory with time becoming merely a needless distraction. This feeling is reflected in the dark, kraut rock melodies of the E.P. and whilst the Factory is long gone in physical form you could seriously imagine hearing this music in the early hours of a particularly inspiration fueled night there. 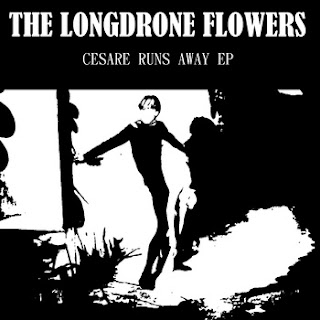 Opener Righteousness turns the dimmer switch right to midnight tinged darkness, with the hypnotic, repetitive psych melody waking you from reality only to give you a dark gloved slap in the face. If, as the band say, they have poured all their sweet love and savage hate into this record then the torture surely begins here. As weapons of torture go this is particularly sweet and not very likely to leave any bruise. Masochistic melodies win!

The tone lightens up for the middle three songs and, especially on Adore Me you hear that aforementioned sweet love come into musical form as the band urge an unknown somebody to adore them in tones verging in the desperate – but perhaps that’s the savage hate part? For the closer we return to the building dark riffs and drums for In Cupids Garden (Pouring Down With Rain) – and it’s a brooding, giant stomping like monster of a song that stretches the love over almost eight and a half minutes until the sound is seemingly unbearable for them.

The elements of psych and kraut merge perfectly in this E.P and it positively revels in its doom laden gothic soundscape. Never has pain seemed so creatively put to use and instead of burying the darkness shiny happy chords the band make a scene so desolate and black you want to explore it even more.